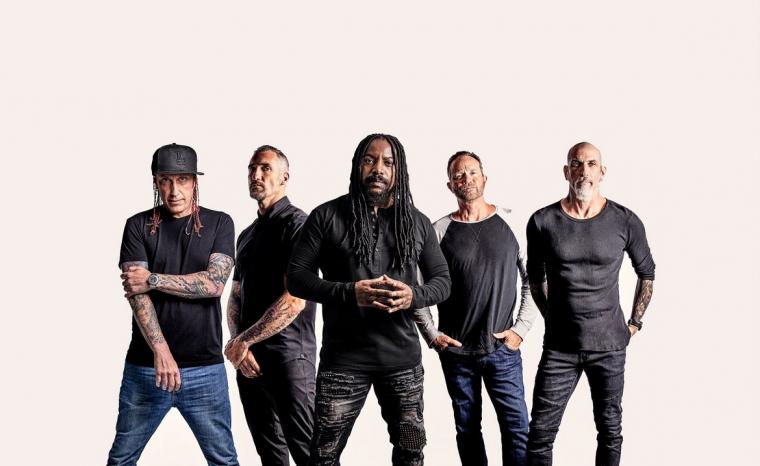 Touring in support of the band's 2020 release Blood & Stone, an album that New Noise magazine raved “starts off strong and grows stronger with each track,” the Grammy-nominated alternative-metal artists of Sevendust play the East Moline venue The Rust Belt on June 29, performing from a repertoire that includes 13 studio albums, one live album, and 36 singles.

The Atlanta-based quintet Sevendust are one of the most prominent nu-metal acts, acclaimed for their aggressive blend of bottom-heavy riffs and soulful, accessible melodies delivered by vocalist Lajon Witherspoon. Formed in 1994 by bassist Vince Hornsby, drummer Morgan Rose, and guitarist John Connolly, with Witherspoon and guitarist Clint Lowery joining the group after the recording of their first demo, Sevendust unleashed its self-titled debut album on April 15 of 1997, a release that sold only 310 copies in its first week but ultimately achieved gold certification through touring and support from their label TVT Records. Known for its heavy riffs, angry vocals, and thrash-like drumming, Sevendust boasted hits such as "Black," "Bitch," and "My Ruin," the latter featured on the Mortal Kombat movie soundtrack, and appeared on the Billboard 200 chart, remaining there for 16 weeks.

On August 24 of 1999, the musicians released their second album Home, which peaked at number 19 on the Billboard 200 and featured Skin from Skunk Anansie and Chino Moreno from Deftones as guest vocalists. The two singles from the album, "Denial" and "Waffle,” gave the band added chart success, and Sevendust performed “Waffle” on Late Night with Conan O'Brien. They went on to perform in Woodstock 1999 and have toured with many bands in the 22 years since, among them Korn, Staind, Nonpoint, Reveille, Godsmack, Mudvayne, Mushroomhead, Powerman 5000, Creed, Kid Rock, Machine Head, Limp Bizkit, Disturbed, and Metallica. Sevendust also scored a Grammy nomination for the Kill the Flaw single “Thank You,” with the group's most recent release Blood & Stone receiving a 10-out-of-10 rating by Audie Ink Radio and a rave for its “tuneful melodies coupled with heavy, cutting riffs.”

Sevendust plays its June 29 concert with opening sets by Austin Meade, Kirra, and Alborn, admission is $29-49, and tickets are available by visiting TheRustBeltQC.com.