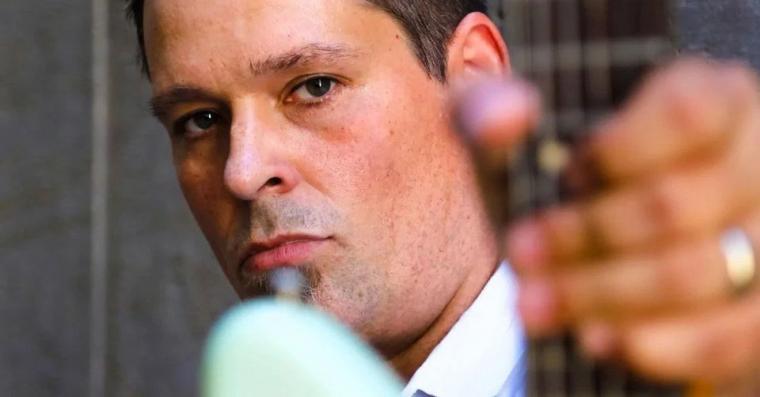 Touring in support of his 2021 album Stompin' Solo – a recording in which the artist, according to Bluest Blast magazine, "carries on the acoustic blues tradition while keeping it fresh and appealing" – Shawn Pittman headlines an August 7 Mississippi Valley Blues Society convert at the Moline Viking Club, his guitar playing lauded by The Rocking Magpie as "intoxicating" and his vocals deemed "damn near perfect."

An Oklahoma native, the 47-year-old Pittman self recorded his debut album in 1996, which was originally called Blues From Dallas and cost the artist $3,000; Ron Levy, who had had just started up Cannonball Records, bought the master for $5,000 and released the recording as Burnin' Up in April of 1998. The Jim Gaines-produced Something's Gotta Give followed in 1999, also via Cannonball Records, and that same year, Pittman opened several concerts for Susan Tedeschi before spending a period of time playing rhythm guitar in her backing band, at one point appearing with the headliner on Late Night with Conan O'Brien. After leaving the outfit, Pittman put together another ensemble and delivered 2001's self-released Full Circle, which was also produced by Gaines. The album comprised mostly self-penned material by Pittman, plus several covers, such as a version of Bob Dylan's "It Takes a Lot to Laugh, It Takes a Train to Cry."

Pittman released 2004's Stay before taking a lengthy break from music, and five years later, he issued his fifth release Meridian and spent two nights opening for B.B. King at the House of Blues in Houston. His 2009 successes led to a flurry of activity with several albums released in quick succession, as well as a new recording contract with Delta Groove Productions. This resulted in a totally different approach used for the recording of his next collection, Edge of the World. Aiming to recreate the vintage tones and style of blues recordings from the 1950s and 1960s, Pittman supplied virtually all of the voices and instrumentation on the recording. Apart from Jonathan Doyle playing the saxophone parts, Pittman recorded his own efforts on vocals, guitar, piano, bass, and drums; was the sound engineer and co-producer; and wrote most of the material. Edge of the World was even recorded in Pittman's home studio in Kyle, Texas, and was finally released in 2011.

Since then, after taking some time away from music to complete a degree in information technology, Pittman had a musical comeback with 2018's Backslidin' Again, and in early 2018, he commenced recording on what would become his 12th album, Everybody Wants to Know. Pittman also performed at the Copenhagen Blues Festival in October of 2019 -- the latest in a total of more than 30 professional visits to Europe over the years -- and went on to record and release 2020's Make It Right! and last year's hit Stompin' Solo.

Shawn Pittman plays the Moline Viking Club on August 7, admission to the 3 p.m. concert is $10-12, and more information and tickets are available by visiting the Mississippi Valley Blues Society at MVBS.org.