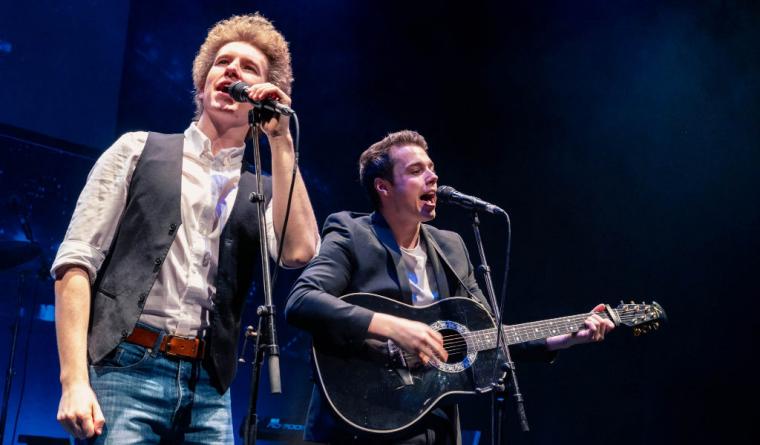 “The Simon & Garfunkel Story" at the Adler Theatre -- November 7.

Lauded by The Stage as “authentic and exciting” and by BBC Scotland as “simply incredible,” the touring sensation The Simon & Garfunkel Story lands at Davenport's Adler Theatre on November 7, with singers Taylor Bloom and Benjamin Cooley and their live band delivering pop/folk favorites in a stage experience that Theatre Weekly calls “as close to the real thing as we're going to get.”

Employing huge projection photos and original film footage, the immersive, concert-style Simon & Garfunkel Story chronicles the amazing journey shared by the iconic duo of Paul Simon and Art Garfunkel, telling the artists' saga from their humble beginnings as "Tom & Jerry" to their incredible success as one of the best-selling music groups of the ‘60s to their dramatic split in 1970.

Initially released in 194, Simon & Garfunkel's debut album Wednesday Morning, 3 A.M. was re-released two years later with a new version of the single "The Sound of Silence," which was overdubbed with electric instruments and drums. The re-released version peaked at number 30 on the U.S. Billboard 200 chart and at 24 on the U.K. Albums Chart, and later received platinum certification by the Recording Industry Association of America (RIAA). After appearing on Simon & Garfunkel's second studio album titled Sound of Silence, the song itself eventually received a three-times multi-platinum certification by the RIAA, and the album also featured Simon's legendary "I Am a Rock," first heard on his 1965 debut solo album The Paul Simon Songbook.

Simon & Garfunkel's third album Parsley, Sage, Rosemary, & Thyme was released in 1966 and received a three-time multi-platinum certification, and their single "Mrs. Robinson" was included in the band's first and only soundtrack, The Graduate, with the song also included on the musicians' 1968 studio album Bookends. That recording peaked at number one in both the U.S. and U.K., and in 1970, Simon & Garfunkel released their fifth and final studio album Bridge over Troubled Water. With its songs including "Cecilia," "El Condor Pasa (If I Could)," and the chart-topping title track, It was their most successful album, peaking at number one in several countries including the U.K. and U.S. Eventually, Bridge Over Troubles Water sold more than 25 million copies worldwide, and received eight-time multi-platinum certification in the United States. Despite the success of that album, Simon & Garfunkel decided to part professional company in 1970, though they have nonetheless made a number of reunion performances, including a free concert in New York City's Central Park in 1981. That reunion performance drew a crowd of half-a-million people and resulted in the live album The Concert in Central Park, and moments from its performance are recreated in the Simon & Garfunkel Story touring production.

The Simon & Garfunkel Story tour comes to Davenport on November 7, admission to the 7 p.m. concert event is $38-68, and tickets are available by calling (800)745-3000 and visiting AdlerTheatre.com.