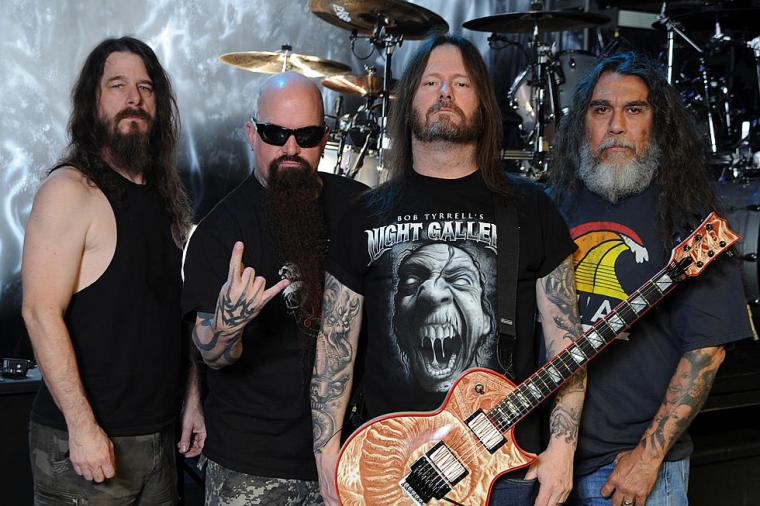 Slayer at the TaxSlayer Center -- November 14.

Performing in their final world tour under the banner “The Final Campaign,” the chart-topping, Grammy-winning thrash-metal musicians of Slayer land at Moline's TaxSlayer Center on November 14, playing from a nearly four-decade repertoire that includes the top-10 Billboard smashes Divine Intervention, Christ Illusion, and Repentless.

Originally based in Huntington Park, California, Slayer was formed in 1981 by guitarists Kerry King and Jeff Hanneman, vocalist and bassist Tom Araya, and drummer Dave Lombardo. The group's fast and aggressive musical style made them one of the founding “big four” bands of thrash metal alongside Metallica, Megadeth, and Anthrax, and in the original lineup, King, Hanneman, and Araya contributed to the band's lyrics while all of Slayer's music was written by King and Hanneman. While Slayer's first two albums – 1983's Show No Mercy and 1985's Hell Awaits – did not chart in the United States, the band then signed with Def Jam Recordings and recorded 1986's Reign in Blood, which found Slayer breaking into the Billboard 200 for the first time. After the release of 1988's South of Heaven, every Slayer album since has landed in the Billboard Top 40, with the musicians' biggest hits including the songs “Disciple,” “Hate Worldwide,” and “World Painted Blood,” all of them Grammy-nominated in the category “Best Metal Performance.”

With its current lineup composed of King, Araya, drummer Paul Bostaph, and guitarist Gary Holt, Slayer's lyrics and album art – covering such topics such as murder, torture, genocide, terrorism, Nazism, and Satanism, Nazism – have generated album bans, delays, lawsuits, and criticism from religious groups and factions of the general public. However, its music has been highly influential, and the band won Grammy Awards in 2007 for “Eyes of the Insane” in 2008 for “Final Six,” both from the 2006 album Christ Illusion. To date, Slayer has released 12 studio albums, two live albums, a box set, six music videos, two extended plays and a cover album, and four of the band's studio albums have received gold certification the United States. After more than three decades of recording and performing, Slayer's musicians announced in January of 2018 that they would embark on their world tour, one that began that May and wraps up this month.

Slayer brings its “Final Campaign” tour to Moline on November 17 with performances by special guests Primus, Ministry, and Philip H. Anselmo & the Illegals, admission to the 6 p.m. concert is $29.50-69, and tickets are available by calling (800)745-3000 or visiting TaxSlayerCenter.com.