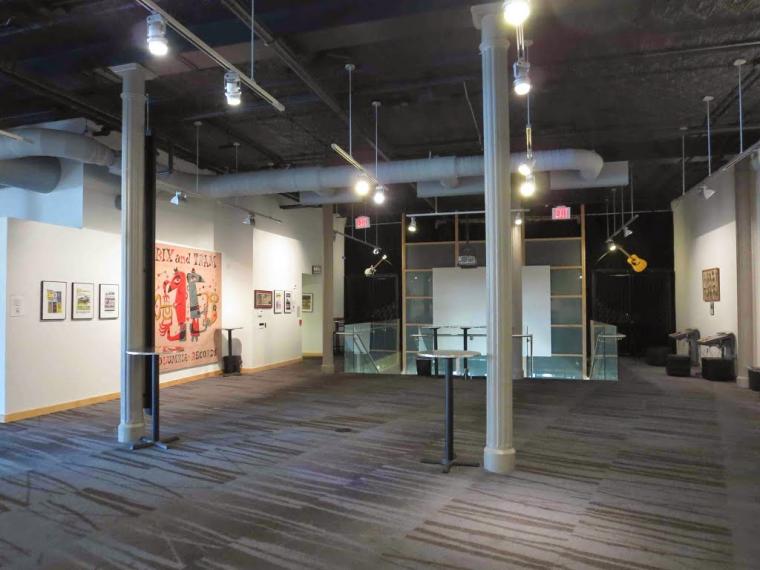 Tyson Danner, Executive Director of the River Music Experience (RME) in Davenport, discusses the live-music and music-education venue's operations during this period of social distancing. We spoke on Monday, March 23.

We've been figuring out how we can do everything online versus in person, because we have no in-person activities going on – not even one-on-one lessons. So this past Thursday, we started Music Lab with Mr. Bret [Dale]. Every weekday morning at 10 a.m., Bret gets on [the RME Facebook page], and he's at home in front of the fireplace singing children's songs and playing a fun record. And he found a puppet, like a raccoon or something, for the kids. (Laughs.) There's a Music Lab group that people can join, but it's also streaming from our main page each day at 10.

Part of it's sort of meant to be a structured time of day to give the kids stuck at home and their poor parents an activity where kids can sit with the iPad and watch for a half hour while their parents have their coffee and stuff. But one thing we realized that's kind of cool – because we're trying to find good opportunities in this situation wherever we can – is if kids tune into this every day, they're gonna get more music education in a week than they do in, like, a year in school. (Laughs.) So it's a great opportunity if you want to get your kids interested in music. Or if you just want them to leave you alone for half an hour.

Mr. Bret does “If You're Happy & You Know It,” and he did “Baa Baa Black Sheep” today. And he wrote a theme song for the Music Lab – he sings a little theme song about the Mr. Bret show. It's insane. (Laughs.) He's so great. He's kind of modeling himself after Mister Rogers, starting out by saying, “Here we are all stuck at home. Why are we stuck at home? It's kind of scary. But it's because we want to stay safe, and we want to keep everyone healthy. So while we're all stuck at home, we're gonna have some fun together.” It's perfect.

Programming for Older Kids and Adults

We haven't started this yet, but we're planning to do prerecorded videos that are, like, the song of the day or the guitar lick of the day or whatever. So if you're sitting at home with your guitar, you can pull that video up and learn a new song. It's something for the teens and the adults that are looking to practice their music while they're at home.

And on the performance side of things, there's this musician Murray Rice who plays in the band Rude Punch, and he has a studio where he recorded some sessions on video with local bands. So we're gonna release those. We're calling them Solitary Sessions, and it'll be like a video post on our page: “Here's this cool local artist writing original music, and we think you should get to know them – now's your chance to get to know a new local artist.”

So they'll do their set, and we have donation links, and the donations will all be split half in half with the musicians, since they're all completely out of work – those people that were making all their income from gigs and don't get unemployment. It's a way to help them a little bit. Most of those are probably going to be recorded by musicians in their individual houses. Some of them might be live-streamed if we can verify in advance that people have a good-enough Internet connection.

Right now, we're reaching out to the bands that we did have on schedule that were touring, to see if they want to do one. But we're also trying to introduce people in the community to other people who actually live here and make music, which we're doing with the intention of “Hey, when this all blows over, come out and see them. Now that you know who they are and care about what they're doing, support them in person.”

We're also hoping to connect with downtown Davenport restaurants, so once or twice a week we'll be like, “Hey, stop in to pick up dinner at so-and-so restaurant before you make it back home by seven for the Solitary Sessions show.” It'd be like a dinner-and-a-show package … but online.

So far, it looks like everything that didn't happen is going to be rescheduled. For some of them, we don't have new dates yet, but all the bands want to reschedule. So as far as we know, nothing is completely canceled yet – everybody will have the chance to see those bands. And if they already have their tickets, they can just hold onto them, and they'll be good for the next date.

We'll do our best to keep everybody posted about it [concert scheduling], but we're gonna avoid, like, constant e-mail announcements and broadcast announcements about every single thing that's been moved, because we're all already deluged with those. “Oh good, Taco Bell's e-mailing me about how they're handling the crisis …!” (Laughs.) So we're mostly just contacting the people that had tickets, and posting on our Facebook page and website.

How to Support the RME ... and Each Other

We have our “donate” links up on the website – that's always a thing, obviously, in order for us to be able to sustain our level of programming. And for the programming to be able to bounce back quickly, we have to maintain some stability. Otherwise it'll take all this ramp-up time to get back to where we were.

We know there are higher priorities, and other places that need help right now: health systems and human services and such. But our approach is if you care about what RME does, and you believe in the mission, and you want us to stick around, please donate what you can.

Otherwise, just engage with the content we're putting out there. I'm actually really pleased that we were able to pivot so quickly that, by last Thursday, we had content coming out that was just as engaging as the in-person stuff.

It sounds trite, but it's true: We're all in it together. And for our cultural community, which is strong, to be able to bounce back and survive this, we really have to remember all the artists and musicians and the people who are creating art, and make sure that they're gonna be able to keep doing that.