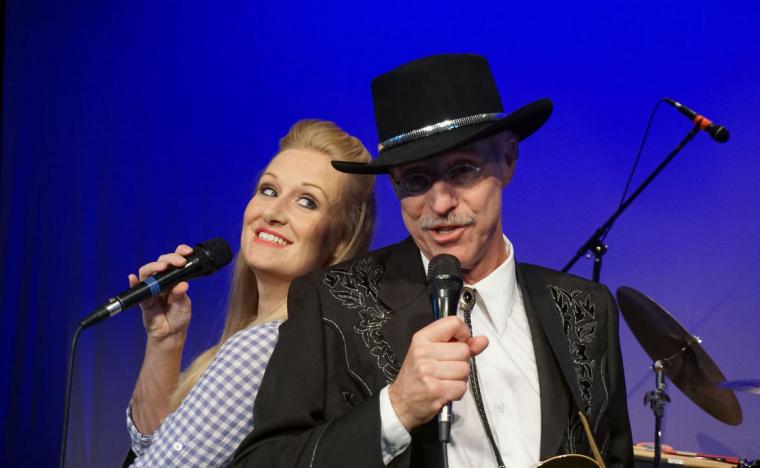 With their timeless hits ranging from “I Walk the Line” to “I Fall to Pieces,” and from “Coal Miner's Daughter” to “Lovesick Blues,” Johnny Cash, Patsy Cline, Loretta Lynn, and Hank Williams will always be at the forefront of count, pop, and gospel musicians, and their iconic talents will be celebrated at Maquoketa's Ohnward Fine Arts Center in Sweet Dreams & Honky Tonks, the January 15 musical celebration starring gifted singers and musicians Tom Waselchuk and Lindsey Giese.

It may be impossible to crown any one performer as country music's biggest, most beloved, or most influential star, but few would argue that Cash, Cline, Lynn, and Williams would all be near the top of any list. Each broke barriers and changed country and popular music forever. The Sweet Dreams & Honky Tonks revue consequently presents the best-loved hits of these classic artists along with stories of their colorful lives, amazing careers, and indelible impact on American music and culture.

Tom Waselchuk is a singer, songwriter, and multi-instrumentalist who has performed for over three decades in a variety of musical genres while always keeping one foot planted firmly in country music. The artist has toured nationally and internationally, composed for musical theatre, and produced a country-music themed holiday show titled Tinsel & Twang: A Merry-cana Christmas. His Sweet Dreams co-star Lindsey Giese, meanwhile, is a dynamic singer and a consummate performer who has sung just about every style of popular music performing in scores of revues with her sister duo The Giese Girls and as a soloist. She starred in the tribute sensation Fabulous Fifties Live! for five seasons and as lead vocalist on Holland America and Celebrity Cruises for four years.

The back-up band for Sweet Dreams & Honky Tonks, affectionately knows as The Dang-Its, features Mark Luhring on drums, Matt Rodgers on bass, Rick Nass on pedal steel guitar, and Chris Wagoner on violin and mandolin. The Dang-Its were named 2013 Country/Bluegrass Performer of the Year by Wisconsin's Madison Area Music Awards, and their most recent recording A Lick of Sense was named the MAMAs' 2014 Country Bluegrass Album of the Year.

Sweet Dreams & Honky Tonks will be performed in Maquoketa on January 15, admission to the 7 p.m. concert event is $13-25, and more information and tickets are available by calling (563)652-9815 and visiting OhnwardFineArtsCenter.com.