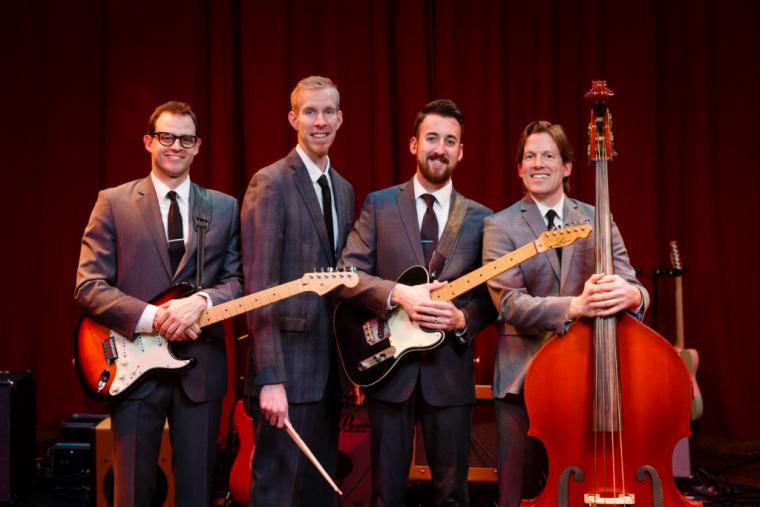 The familiar sounds of “Peggy Sue,” “Maybe Baby,” “Oh Boy,” “Everyday,” and many other iconic '50s-rock hits will fill the Circa '21 Dinner Playhouse on May 30, with the Rock Island venue presenting two performances of the exhilarating touring production That'll Be the Day: A Tribute to Buddy Holly & the Crickets starring Todd Meredith, the leading man from Circa '21's 2008 musical Buddy: The Buddy Holly Story.

A true pioneer of the 1950s' burgeoning rock scene, Buddy Holly was highly influenced by Elvis Presley after seeing him perform in 1955, and the artist began to incorporate into his music a rockabilly sound, a rhythm-guitar downstroke, and unique hiccup-like vocals. In That'll Be the Day, the musicians of Todd Meredith & the Rave-Ons will take audiences on a musical journey starting with Buddy's early recordings at Decca Records in Nashville, continuing through his breakout hits with Norvajack Studios in Clovis, New Mexico, and ending with the story of Holly's ill-fated final tour and tragic death in Iowa. Between presentations of songs such as “Rave On,” “Not Fade Away,” “Raining in My Heart,” and the show's title number, Circa '21 patrons will enjoy humorous banter between numbers as well as receive an enjoyable history lesson about this legendary singer and monumentally influential group.

A magna cum laude graduate of New York's Siena College, Meredith has acted in, directed, and music directed numerous productions of Buddy: The Buddy Holly Story nationwide, and in addition to playing Buddy Holly, he's performed as Carl Perkins in several stagings of the Tony-winning Million Dollar Baby, including its recent engagement at Amana's Old Creamery Theatre. Meredith's musical-theatre credits also include roles in Pump Boys & Dinettes, Ring of Fire, Urinetown, and Annie, and reviewing the actor in DC Metro Theater Arts, Julia L. Exline wrote, “Todd Meredith's performance as Buddy Holly, a determined young singer who refused to submit in a repressive environment, was one of the most effervescent I've ever seen.”

That'll Be the Day: A Tribute to Buddy Holly & the Crickets will be performed on May 30 at 1 and 7:15 p.m. Thursday's afternoon presentation is preceded by a plated lunch at noon, with admission $46.73 per person, and evening-show admission is $25-30, with sandwich baskets, appetizers, and drinks available for purchase. For more information and tickets, call (309)786-7733 extension 2 or visit Circa21.com.