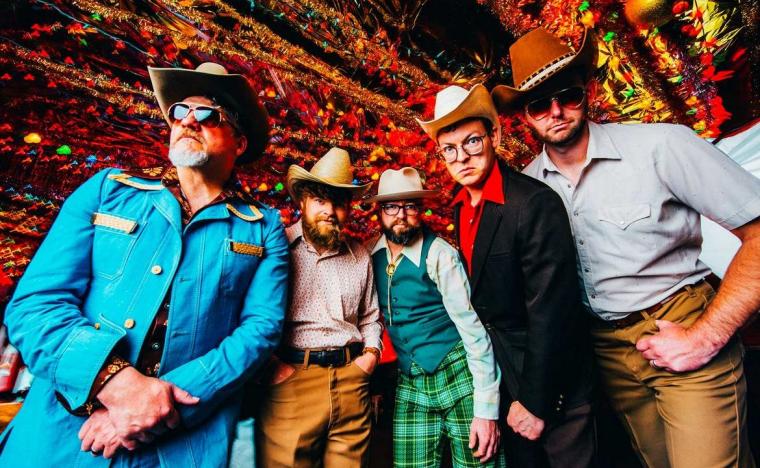 A one-of-a-kind blend of bluegrass and comedy coming to the Quad Cities from a remote part of the Arkansas Ozark Mountains region, the family musicians of The Cleverlys take the stage at Davenport's Rhythm City Casino Resort Rhythm Room on January 21, the quintet's talents leading the New York Times to write, “If Earl Scruggs, Dolly Parton, and Spinal Tap spawned a litter of puppies, it would be the Cleverlys.”

Led by vocalist, guitarist, and comedian Digger Cleverly, the ensemble in completed by four of the artist's nephews: Ricky Lloyd Cleverly on bass and vocals; DVD Cleverly on banjo and vocals; Cub Cleverly on mandolin and vocals; and Sock Cleverly on fiddle and vocals. The group made its album debut with their self-titled 2011 release, which features a dozen tracks of mostly original compositions plus covers of such tunes as the Bangles' “Walk Like an Egyptian.” Following the 2016 EP Cash Crop, The Cleverlys debuted their second full-length release – and first national-label release – in 2019's Blue, where songs such as Beyoncé's “Irreplaceable,” LMFAO's “Party Rock Anthem,” The Proclaimers' “I'm Gonna Be (500 Miles),” and Justin Bieber's “Baby” are given the band's unique combination of pop celebration and bluegrass spin. According to Broadway World, “Every art form needs to be able to laugh at itself, and The Cleverlys do so without making a mockery of the genre,” adding that Blue is “as phenomenal as it is clever.”

The group's set list also includes singular arrangements of such tunes as Psy's "Gangnam Style," a medley of Blackstreet's "No Diggity," and Flo Rida's "Low" that recently went viral on Facebook, with over 11 million views from its local-television appearance. The Cleverlys have performed as some of the nation's largest festivals – among them Stagecoach, Telluride, the CMA Music Fest and the iconic Grand Ole Opry – and Rolling Stone wrote that Digger's “comic sensibilities are a hilariously off-kilter hybrid of Homer and Jethro and The Office."

The Cleverlys bring their tour to the Rhythm City Casino Resort Rhythm Room at 7 p.m. on January 21, and $25 tickets must be purchased in seats of two or four. For more information and to reserve, call (844)852-4386 or visit RhythmCityCasino.com.