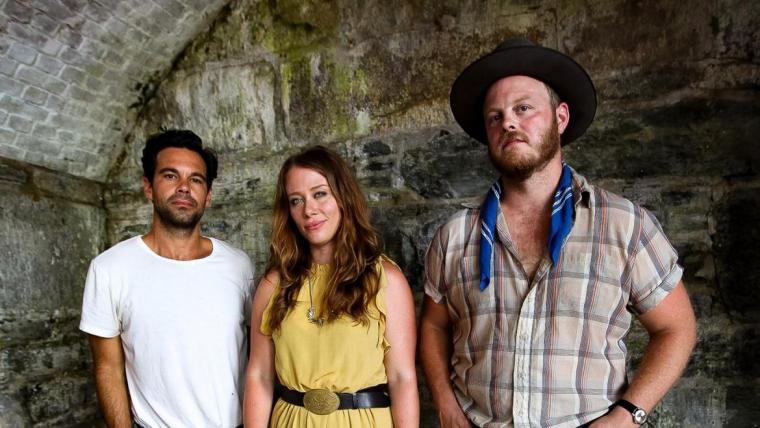 The Lone Bellow at the Codfish Hollow Barn -- July 18.

Lauded by Paste magazine for their “emotional urgency” and by the Chicago Tribune for “the sheer force of the trio's aching, tight-knit harmonies,” the Americana and alt-country musicians of The Lone Bellow perform a July 18 Moeller Nights concert at Maquoketa's Codfish Hollow Barn, demonstrating why NPR raved about “the group's earnest, ingratiating charm, dispensed via charisma-drenched songs that amble and soar.”

Composed of Zach Williams and Brian Elmquist on guitar and Kanene Donehey Pipkin on mandolin, bass, and keyboard, The Lone Bellow began as a songwriting project for Williams, whose wife had suffered temporary paralysis following a horseback-riding accident. During her recovery period, Williams coped with the experience by writing in a journal, and at the urging of friends, learned how to play the guitar, eventually turning his journal entries into songs. After his wife's recovery, Williams began performing as a solo act around Brooklyn and New York City, and when he decided to form a full band in 2010, he contacted old friend Elmquist and fellow singer Pipkin, and The Lone Bellow was officially conceived.

In 2012, the group signed with Descendant Records, a newly formed imprint of Sony Music, and the musicians released the group's self-titled debut the following year. The Lone Bellow debuted at number 64 on the Billboard 200 before rising to number five on the U.S. Folk charts, and critical raves greeted the trio from the start. People magazine included the album as one of their 10-best of the year, and Entertainment Weekly called it “One of the top reasons to love country music in 2013.” Like its predecessor, The Lone Bellow's second album, 2015's Then Came the Morning, also hit the number-five position on the Billboard charts, and earned the group an Americana Music Award nomination for Duo/Group of the Year. Now based in Nashville, the musicians are currently touring in support of their most recent release Walk Into a Storm, a recording praised by NPR for its “bright, crisp, sunny sound that perfectly matches The Lone Bellow's penchant for warmly rousing, gospel-inflected Americana.”

The Lone Bellow performs its July 18 engagement with an opening set by the Oshima Brothers, admission to the 8 p.m. concert is $35-40, and more information and tickets are available by visiting MoellerNights.com or CodfishHollowBarnstormers.com.