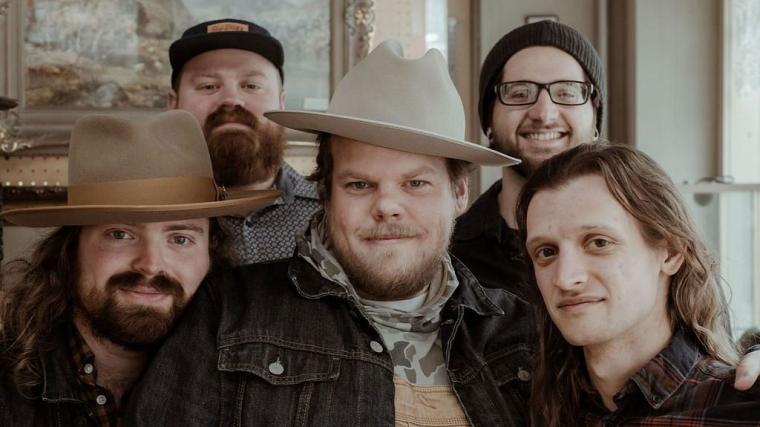 Them Coulee Boys at the Raccoon Motel -- September 22.

Touring in support of their 2021 album Namesake that Folking calls "a wonderful dream of a record," the Midwestern artists of Them Coulee Boys headline a September 22 concert at Davenport's Raccoon Motel, the bluegrass talents of Eau Claire, Wisconsin, also recent headliners at venues including Davenport's Redstone Room and Maquoketa's Codfish Hollow Barn.

Currently composed of Beau Janke, Neil Krause, Stas Hable, and Jens and Soren Staff, Them Coulee Boys was founded in by Beayuand Soren in 2013, and the musicians quickly found themselves a major force on the Midwestern music scene, their 2014 album I Never Lied About Being in Love and 2016 follow-up Dancing in the Dim Light earning them such citations as “Best Local Album 2016” by Volume One magazine and “Best Bluegrass Band” and “Best Folk Band” in Visit La Crosse's 2017 “Best of La Crosse” poll. The ensemble has shared stages with the likes of John Fogerty, Trampled by Turtles, Pert Near Sandstone, Horseshoes & Hand Grenades, and the Yonder Mountain String Band, and in 2018, Them Coulee Boys released their third album Die Happy to rave reviews. According to The Alternate Root, the songs on this recording “were born with a natural sense of the human condition, translating what [the musicians] see into laser-sharp assessments of characters and a particularly unique knack of finding the middle-ground sweet spot between punk rock, bluegrass, and rock 'n' roll.”

The group was twice named a Wisconsin Area Music Association Band of the Year nominee, and in 2020, the Milwaukee Journal Sentinel labeled the musicians "a band to watch." As the reviews for Namesake suggest, they're also a band well worth listening to. As reviewer Bill Golembeski wrote for Folking, Them Coulee Boys' latest recording "breaks free from 'the four grey walls that surround me' and opens the bluegrass/folk/rock throttle to burn its melodic way through my rural Midwest Wisconsin with its dense northern woods, western cliffs, countless backroads that girdle small towns with Budweiser taverns, red barns, John Deere tractors, August hay bales, and of course, way too many cows."

Them Coulee Boys play their Davenport engagement on September 22 with additional sets by The Barlow and Duke Oursler, admission to the 7 p.m. concert is $15, and more information and tickets are available by visiting TheRaccoonMotel.com.