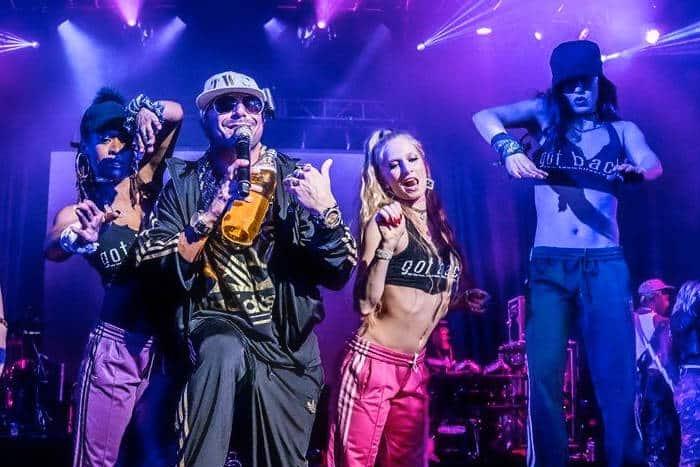 Too Hype Crew at the Rust Belt -- September 30.

Performing their tribute to classic hip-hop and R&B party anthems from the late '80s, '90s, and early-'00s, the thrilling party band Too Hype Crew plays a headlining concert at East Moline venue The Rust Belt on September 30, the performers having opened for the likes of Nelly, Vanilla Ice, Naughty by Nature, Tone Loc, Digital Underground, and Jason Derulo ... and the group the only band in the past decade to perform at the Playboy Mansion.

Meet the musicians as they introduce themselves at TooHypeCrew.com.

C Note (lead vocals, keys): Too Hype Crew founder and MC, C-Note, a.k.a. “Cords," was well on his way to a life-rotting corporate existence when he got the old school bug. Now he spends his days on stage trying to burn off all the Colt 45 and Boone’s Farm he drinks at shows.

P. Tugz (lead vocals, keys, mouth turntables, percussion): Patrick, a.k.a. “P.Tugz," is an accomplished freestylist and MC for THC. Coming in at 6’5," he also towers over the Crew. Admittedly obsessed with Soul Train re-runs, P Tugz was once considered a class clown. Now look who’s clownin’.

Woodsy Fresh (vocals, drums): Having played in several successful bands prior to joining THC including Common Ground, Bad Daddy, and Austin City Limits, Drummer Stevie D, a.k.a. “Woodsy Fresh," is the keeper of the beat that maintains the controlled chaos.

DJ Shor "T" (vocals, keys, percussion, turntables): Holdin’ down the North Siiide, THC MC, DJ, keyboardist, and percussionist Tami, a.k.a. DJ Shor “T," may be vertically challenged, but she’s got mad skills. When she’s not dreaming of slam dunks, she’s on stage tearin’ it up with some of the best spittin’ on two short legs.

Cornbread (vocals, guitar, bass, saxophone): Mel, a.k.a. “Cornbread," covers a lot of ground – on and off the THC clock. Along with his THC duties, he has been the guitarist on Empire for six seasons, he teaches guitar during the day and runs an open mic night in Chicago every week.

j dizzy (vocals, guitar, bass): Jordan, aka “j dizzy," lays down sick bass that’s seriously out of this world (oh yeah, he’s an alien!). After touring with punk bands for years, his spunky, funky style is perfect for the THC crew. This blunt smokin’, whiskey drinkin’, bass thumpin’ bad boy has a soft side too. Especially when it comes kittens and puppies (but don’t tell anyone).

Da Legend (rapper, dancer, photographer, goodwill ambassador): David, a.k.a. “Da Legend," is a trained professional dancer and is also spineless – as in the G is so flexible, he can’t possibly have a spine! He raps, dances, sings, plays keys and not only starts the party at every show, he finishes it! Laydeez, run.

Too Hype Crew plays their East Moline engagement on September 30 with assistance from the Fly Girls and the Extremely Worthless Posse, admission to the 8 p.m. concert event is $12-15, and more information and tickets are available by visiting TheRustBeltQC.com.