Transcendence and Perversion at the End of Time: An Evening of Contrasts with Darsombra and Giallows, October 24 at the Village Theatre 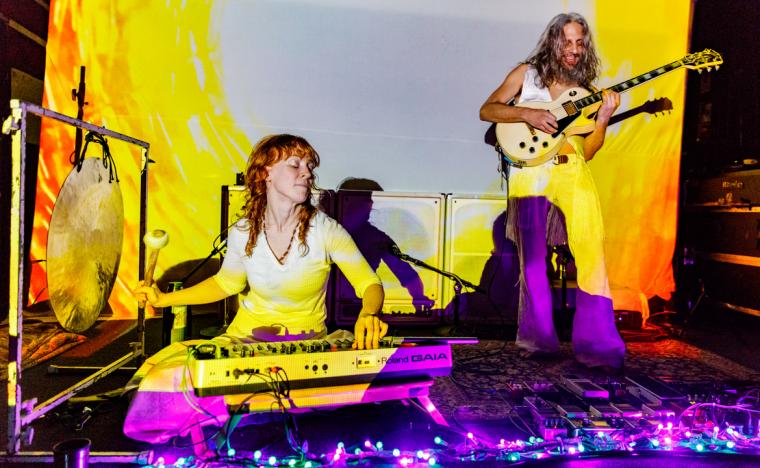 Darsombra at the Village Theatre -- October 24 (photo by Matt Condon).

Darsombra are a globe-trotting duo from Baltimore who have spent the last 10-plus years unleashing their “trans-apocalyptic galaxy rock” in 20 countries on three continents. A self-contained unit composed of Brian Danilowski (guitar, vocals, FX) and Ann Everton (synth, FX and percussion), their enormous tour bus – painted in the likeness of a grinning white whale – has carried them to “music venues, festivals, DIY spaces, house shows, galleries, city ruins, cultural centers, record stores, coffee shops, and parks,” and when no other venues are available (or if they feel like it), they'll set up their gear, fire up the generator, and perform live on the Internet from national parks, forests, and road sides.

Their swirling sheets of guitar and synth are accompanied by Everton's intense and detailed visual projections. These run the gamut from trippy patterns and Eastern-derived imagery to nightmarish depictions of Earth reminiscent of the 1982 film Koyaanisqatsi (“world out of balance”). It's a lot to take in, which is the point. Their stated goal is to create a “a symbiotic audio-visual-energetic experience that creates a temporary reality, woven by sight, sound, and movement.”

Transcendence is the goal. Darsombra have doom roots, but as their “trans-apocalyptic” tag suggests, they've reached beyond the anthropocene shroud, and they've come back with a mission in mind. You can tell by the kindness in their eyes when they greet kids at the merch table, and their willingness to play anywhere. Darsombra carry heavy cult vibes, but in a benevolent '60s style, all white light and white clothes, come to collect the lost flower-children of the 21st century and guide them through the grim times ahead. 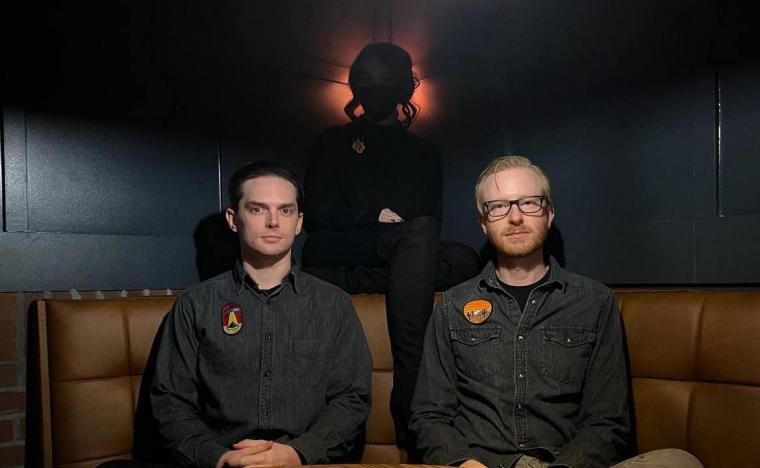 The ever-evolving (mutating?) local opener Giallows provides a sinister mirror image. They share Darsombra's willingness to grow and experiment, albeit with a constantly changing lineup. Giallows has grown even weirder and insular in the months since its last live performance, which saw them perform for the first time in their new incarnation as a self-described “cult.” Their dark clothing, explicit adoption of the cult tag, and horror roots make for a disturbing counterpoint to Darsombra's hope-in-the-darkness end-time trip. Giallows offer no redemption, no way out, only absorption by the strange feminine power that now grips the band.

When reached for comment, erstwhile “leader” Devin Alexander had little to say about their latest and strangest transformation. “We've been hard-praisin' our masked leader while she amasses power … . Isn't that all a good-old-fashioned cult can hope for?”

Guitarist Adam Wesconsin offered more detail: “We ditched our traditional amplifiers and acquired a small arsenal of dizzyingly baroque gear which will, in theory, allow bandmaster C.M. to control the entire band's sonic position in spacetime as she sees fit.”

Darsombra and Giallows play the Village Theatre (2113 East 11th Street, Davenport IA) on October 24 with an opening set by the legendary and reclusive pop star Del Rockford, originator of the Derbyshire sound. Doors are at 6 p.m. for the 7 p.m. concert, admission is $5, and more information is available by visiting Facebook.com/villagetheatre5.