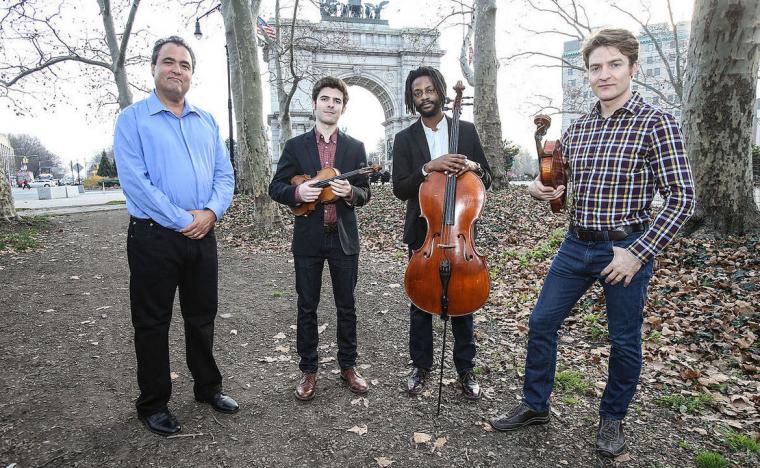 With the Washington Post praising their “ability to create the best rock, jazz, bluegrass, and the rest in sonorities that are rich, transparent, balanced, and, blessedly, lightly aplified,” the Grammy-winning, genre-hopping chamber musicians of the Turtle Island Quartet serve as the latest guests in Quad City Arts' Visiting Artists series, their October 6 concert at Rock Island High School sure to demonstrate why the San Francisco Examiner hailed their “zest, imagination, and brilliant technique.”

Composed of violinists David Balakrishan and Alex Hargreaves, cellist Malcolm Parson, and viola player Benjamin von Gutzeit, the Turtle Island Quartet originated in 1985, and has consequently emerged as a singular force in the creation of bold new trends in chamber music for strings. Winner of the 2006 and 2008 Grammy Awards for Best Classical Crossover Album, the ensemble fuses the classical-quartet aesthetic with contemporary American musical styles, with legendary cellist Yo-Yo proclaiming the group to be “a unified voice that truly breaks new ground – authentic and passionate – and a reflection of some of the most creative music-making today.”

The Turtle Island Quartet's three-decade journey has taken the musicians through forays into folk, bluegrass, swing, be-bop, funk, R&B, new age, rock, and hip-hop, as well as the music of Latin America and India – a repertoire consisting of hundreds of ingenious arrangements and originals. The musicians boast dozens of recordings and TV and radio credits including the Today Show, All Things Considered, Prairie Home Companion, and Morning Edition, and have served as feature subjects in magazines such as People and Newsweek. They've also collaborated with famed artists such as clarinetist Paquito D’Rivera, vibraphonist Stefon Harris, guitar legend Leo Kottke, and the Manhattan Transfer, plus pianists Billy Taylor, Kenny Barron, Cyrus Chestnut and Ramsey Lewis.

In addition to its October 6 public concert at Rock Island High School, the Turtle Island Quartet will deliver a quartet of abbreviated performances at additional area venues earlier in the week. On October 1, the musicians will visit Moline's Butterworth Center (1105 Eighth Street) at 3 p.m. and the Moline Public Library (3210 41st Street) at 6:30 p.m.; and on October 3, the ensemble will stop by Muscatine's Wesley United Methodist Church (400 Iowa Avenue) at 2 p.m. and, in Davenport, St. Ambrose University's Rogalski Center on High Street at 6:30 p.m.

Admission to the abbreviated concerts is free, with tickets to the 7 p.m. public concert on October 6 $10-15 at the door. For more information on the Turtle Island Quartet's area engagements, call (309)793-1213 or visit QuadCityArts.com.