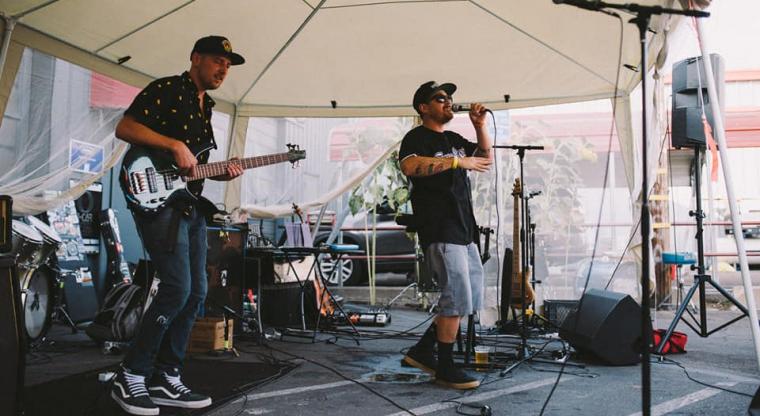 Local reggae and hip-hop sensations who took their high-energy act out west and currently reside in Sacramento, California, the singers, songwriters, and multi-instrumentalists of Two Peace headline a pre-Thanksgiving concert at Davenport's Redstone Room, their November 24 set acquainting – or re-acquainting – area audiences to the musical gifts of Quad Ciies natives Nick Harksen and Jacob Hahn.

Although the band was formed in late 2011, the members of Two Peace like to say that the story started a little prior to that. Vocalist and keys man Harksen was pursuing his own musical journey as a solo artist. He released his first solo album Ya Gotta Feel It in 2009, and ironically enough, eventual Two Peace bass man Hahn had bought his very first copy. A friendship was born and continued into 2011, and while at a music festival in Alabama, Hahn found himself inspired to pick up the bass again. Hahn asked Harksen if he could join him on his musical path, Harksen agreed, and Two Peace was born.

Since their official debut a decade ago, Two Peace has played the local scene and all over the Midwest, opening for such bands as Easy Star All-Stars, Passafire, John Wayne & the Pain, and Natty Nation. In 2014, Harksen and Hahn attended the California Roots Music Festival as fans, consequently decided that California was where they and their music belonged, and after a few weeks of camping in their van and searching for jobs and a place to stay, Two Peace found their new home in Sacramento. Over the past seven years, Harksen and Hahn have played many shows all over Northern California, opening for bands such as Katchafire, Morgan Heritage, Alborosie, The Skints, The Green, Jesse Royal, Fortunate Youth, The Expanders, House of Shem, and many other top reggae acts. Two Peace has also has toured the western side of the nation, opening for outfits including EarthKry, Ital Vibes, J Ras, and The Riddims. Additionally, Two Peace has gone on three national summer tours of their own, starting in California, traveling back to the Midwest to reunite with all of their hometown fans, and then traveling back to Sacramento, enjoying tour stops in many cities and states along the way.

Two Peace plays the Redstone Room on November 26 with an opening set by the Wontu Trees, admission to the 8 p.m. concert is $10 for general admission, and more information and tickets are available by calling (563)326-1333 and visiting RiverMusicExperience.org.