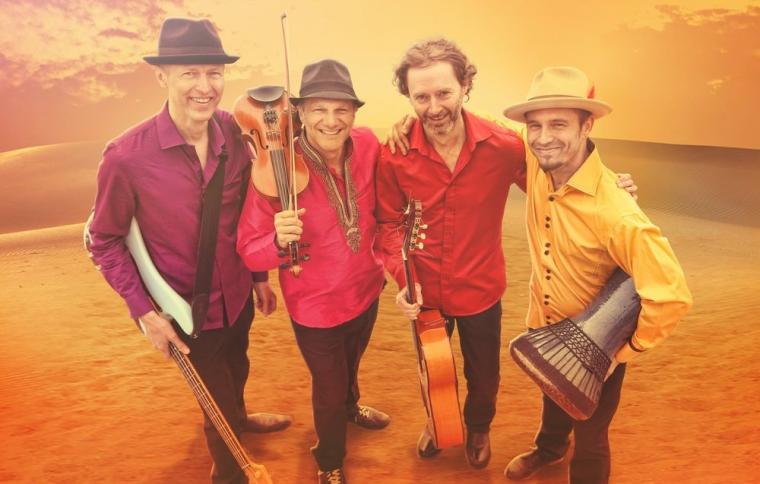 Continuing its presentation of virtual programming in the venue's annual PASS (Performing Arts Signature Series) program, Quad City Arts hosts a thrilling January 27 concert event with an ensemble that Maverick magazine called “an energetic and exciting band with talent to burn”: the Sultans of String, who will deliver a genre-hopping blend of dynamic styles recorded specifically for Quad City Arts patrons.

Three-time nominees for JUNO Awards (the Canadian equivalent of the Grammys), Sultans of String treat audiences to a global sonic tapestry of Spanish flamenco, Arabic folk, Cuban rhythms, and Gypsy-jazz, and are revered for celebrating musical fusion and human creativity with warmth and virtuosity. Fiery violin dances with rumba-flamenco guitar while bass lays down unstoppable grooves, acoustic strings meet with electronic wizardry to create layers and depth of sound, and the resulting world rhythms have led to the group hitting number one on North American world/jazz music charts and earning eight Canadian Folk Music Award nominations, winning for Instrumental and World Group of the Year. Sultans of String also took home the 2014 SiriusXM Award for World Group, as well as first place in the International Songwriting Competition, and the band has recorded live for BBC TV, SiriusXM in Washington DC, CTV’s CanadaAM, CBC’s Canada Live, and Kentucky’s WoodSongs. The musicians have also topped campus and community radio charts in Argentina, Australia, Belgium, Colombia, France, Germany, Italy, Poland, Spain, The Netherlands, the United Kingdom, and the United States.

To date, Sultans of String have released seven albums and have brought their unique blend of global music to audiences around the world, including at the U.K.'s Celtic Connections Festival, New York City's Birdland Jazz Club, Canada’s National Arts Centre, and Memphis' Folk Alliance. Reviewing the group's 2016 release Subcontinental Drift, Acoustic Guitar magazine raved, “Sultans of String succeeds brilliantly, thinking like classical musicians and listening like jazzmen,” adding that the band performs “with a spirit of playfulness, of openness, of warmth, that makes Subcontinental Drift such a beautiful surprise.” As for the musicians' 2020 album Refuge, Mainly Piano described it as “a stunning and inspiring world-music collection” that's also “a timely reminder that we're all in this together as one world, one human race, one planet.”

Admission to the January 27 Sultans of String concert includes a digital link of the performance along with curbside take-out service from either Crust in Bettendorf or The Combine in East Moline using a prix-fixe menu created for this event. A link to the menus with instructions for placing orders will be provided in advance. Access to the performance will be provided by 4 p.m. the day of the event and will stay active until midnight, and all dinner orders placed in advance will be available for pick-up at 5:30 p.m. for pickup. There is also an option to purchase the performance only.

For Sultans of String tickets and more information on the virtual PASS event, call (309)793-1213 or visit QuadCityArts.com/pass/html.