William Campbell: “All in Due Time” Album-Release Concert, September 10 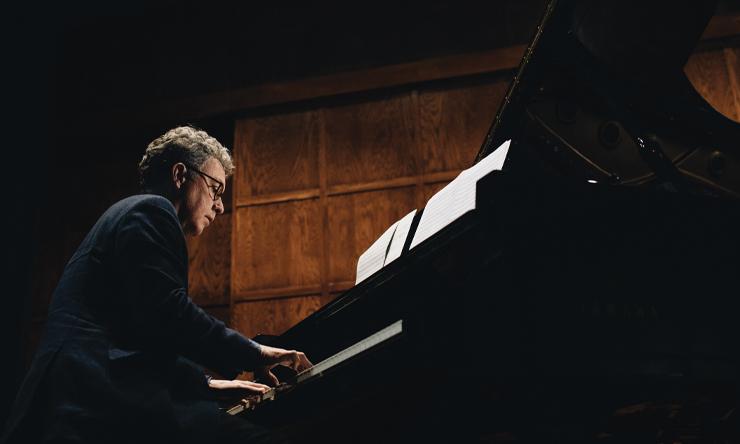 William Campbell: “All in Due Time” Album-Release Concert at St. Ambrose University -- September 10.

A longtime St. Ambrose University professor as well as a pianist and award-winning composer of music for film, dance, theatre, orchestra, and choir, William Campbell performs at his university's Galvin Fine Arts Center on September 10 in celebration of the release of All in Due Time, Campbell's self-recorded solo album whose tracks were performed on the artist's Yamaha C7 semi-concert grand piano.

A member of ASCAP and CCLI, the American Composers Forum, and a past board member of the Iowa Composers Forum. Campbell earned degrees from the University of Arizona (B.M.), the San Francisco Conservatory of Music (M.M.), and the University of Oregon (Ph.D.). He has led contemporary music at churches for over 20 years, and is the Director of Contemporary Music at Davenport's St. Paul Lutheran Church. A passionate educator, Campbell teaches music theory, composition, technology, and world music-classes as Professor of Music Theory & Composition at St. Ambrose, whose faculty he has served on since 2005.

Campbell has composed the scores for full-length feature films and documentaries, with his score for Fourth Wall Films' locally produced Sons & Daughters of Thunder receiving the 2020 Award of Excellence from the Iowa Motion Picture Association. A longtime collaborator with film director Skye Fitzgerald, Campbell scored the films Hunger Ward, which was nominated for an Academy Award in 2021; Lifeboat, nominated for an Oscar and a News & Documentary Emmy in 2019; and the Oscar-shortlisted 50 Feet from Syria. He also writes for theatre and dance, including Latina Dance Project's international touring show Coyolxauhqui ReMembers, and wrote a completely different type of music for the zombie film A Cadaver Christmas, whose soundtrack was released through Howlin' Wolf Records.

Additionally, Campbell has been awarded with honors of scholarship and teaching from the San Francisco Conservatory of Music, the University of Oregon, and Pima Community College, and in 2011, he was inducted as on of Tucson, Arizona's Salpointe Catholic High School Distinguished Alumni. Campbell's composition citations include multiple ASCAPPlus Awards, 2006's Penfield Music Commission Project Composition Prize, a 2003 Waging Peace International Composition Special Honor, and the 1995 Jim Highsmith Award from the San Francisco Conservatory of Music for his orchestral work Sinfonietta. In 2011, the Kennedy Center American Collegiate Theater Festival also awarded his original score for a new adaptation of Oedipus Rex.

With Campbell's new album All In Due Time, the composer and pianist hopes to conjure up memories, images, and off-centered meditations of the moment. The music is accompanied by visual art from St. Ambrose and local artists Joseph Lappie, Renee Meyer Ernst, Nicolas Propes, Chris Reno, Randy Richmond, and Kristin Quinn, with the album itself a collection of pieces created from feelings of hope, melancholy, mystery, and awe. Multiple formats of All in Due Time will be for sale in the Galvin lobby on the night of the concert.

William Campbell's All in Due Time Album-Release Concert will be held in St. Ambrose University's Galvin Fine Arts Center on September 10, admission to the 7:30 p.m. event is $8-15, and more information and tickets are available by calling (563)333-6251 and visiting SAU.edu/campbell-album-release-and-concert.