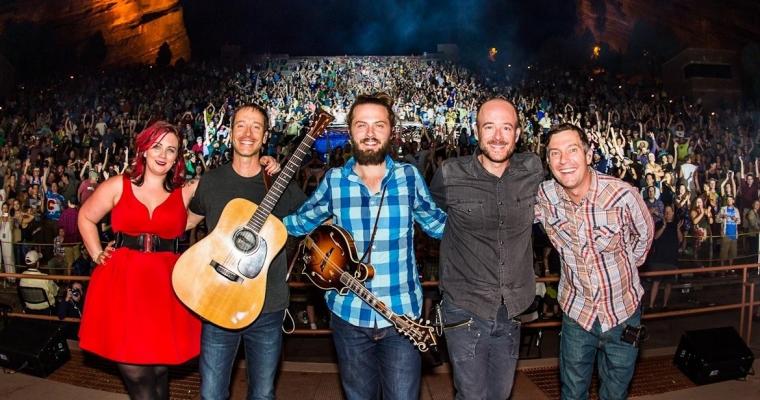 Praised by Marquee magazine for their “dynamic presence” and for “continuously pushing the genre of bluegrass and their legacy within the genre,” the members of Yonder Mountain String Band serve as Moeller Nights headliners at East Moline's The Rust Belt on August 8, the musicians' recent album Love. Ain't Love described by LiveForLiveMusic.com as a work in which the chart-topping group “finds plenty of new twists on the way to making a stellar record.”

Composed of Dave Johnston on banjo, Ben Kaufmann on bass, Adam Aijala on guitar, Allie Kral on fiddle, and Jake Joliff on mandolin, the Yonder Mountain String Band originated in Urbana, Illinois in 1998, when Johnston requested Jeff Austin to join and sing in his band The Bluegrassholes. Austin, who played no instrument at the time, revealed to Johnston that he did own a mandolin, and Johnson told him to come to the performance and “play anything, just play fast and loud.” The Bluegrassholes disbanded not long after, and Johnston and Austin subsequently moved to Colorado, where they met Kaufmann and Ajaila at a local club. In December of 1998, the four musicians formed Yonder Mountain String Band and enjoyed their first gig at Boulder's Fox Theatre, quickly developing both bluegrass and jam-band fan bases and releasing their album debut Elevation in the fall of 1999.

Following 2000's Mountain Tracks: Volume I and 2001's Town by Town, Yonder Mountain String Band had its first Billboard hit with 2002's Mountain Tracks: Volume 2, which made it to number 11 on the Bluegrass chart and led to honors such as the musicians' inclusion on the 2005 album This Bird Has Flown – A 40th Anniversary Tribute to the Beatles' Rubber Soul and a performance at the 2008 Democratic National Convention in Denver. The group also boasted three consecutive albums – Yonder Mountain String Band, Mountain Tracks: Volume 5, and The Show – that landed at number three on the Billboard Bluegrass chart. And after Austin's 2014 departure and Kral's and Joliff's 2015 arrivals, Yonder Mountain String Band scored another top-three hit in 2015's Black Sheep, an album that Relix magazine said “finds the conventional and the contemporary in a perfect mesh.”

The Yonder Mountain String Band plays its August 8 Rust Belt concert with an opening set by Arkansauce, admission to the 7:30 p.m. event is $25-30, and more information and tickets are available by visiting MoellerNights.com.