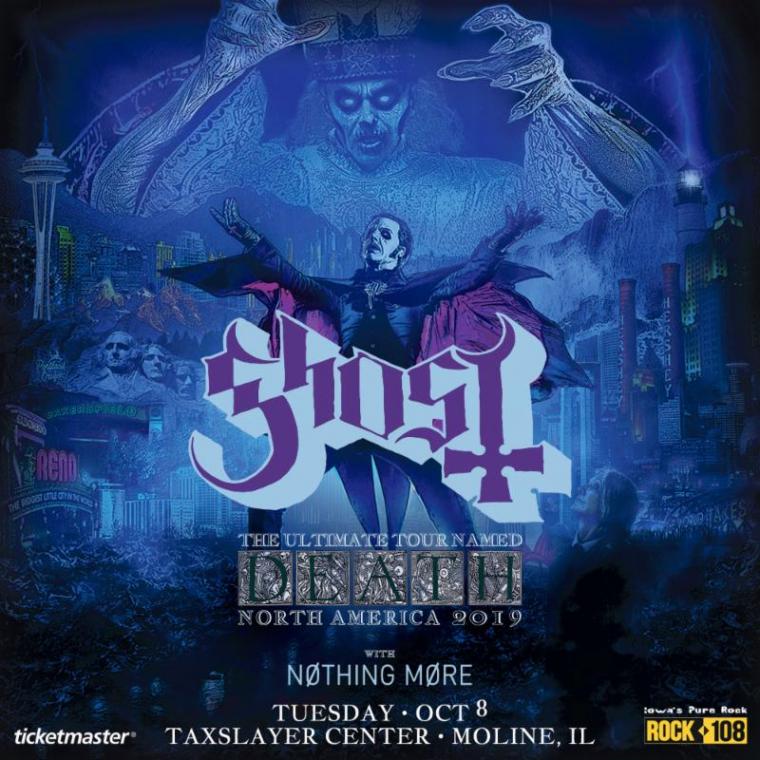 New Single "Faith" — #1 Most-Added Track at Active Rock Radio in this, its first week with 36 adds

LOS ANGELES, CALIFORNIA (May 21, 2019) — Seven new dates for the "Ultimate Tour Named Death," Ghost's six-week North American headline arena tour are announced, adding shows in Edmonton, Toledo, Moline, Youngstown, Huntington, Hamilton, and Ottawa. A series of ticket pre-sales begins today at 12 NOON local, and the public on-sale starts at 10 AM local this Friday, May 24. Log on to http://ghost-official.com for all pre-sale, VIP packages, and ticketing details. With Nothing More providing support for the tour and Twin Temple supporting on the 9/28 SLC date, the Frank Productions Concerts-produced Fall dates kick off on September 13 in Bakersfield, CA and run through to October 26 in Glens Falls, NY.

In support of this tour, "Faith," the third single from Ghost's GRAMMY-nominated album Prequelle, went to Rock Radio just last week and is the #1 most added track there this week with a total of 36 adds. "Faith" follows Prequelle's two previous singles, "Rats" and "Dance Macabre," both of which held the #1 spot on the Active and Mainstream Rock Radio charts for multiple weeks. An eminently tight track with its relentless and melodic guitar solos and dark, torturous lyrics, "Faith" manifests Ghost creative force Tobias Forge's flair for soaring stadium-size anthems.

A live performance of "Faith" was shot last November at Ghost's sold-out Los Angeles Forum show, the band's first-ever North American headline arena concert. The clip showcases this tour's expanded theatrical production, a striking stage set resembling a medieval cathedral with a backdrop of illuminated stained-glass windows. In addition to rich costumes, special effects, and a spectacular light show tailored-made for arenas, the Cardinal, the Ghouls, and the Ghoulettes will take advantage of a series of multi-level platforms and walkways to prowl around on while performing some of Ghost's fan-favorite songs from the band's albums and EPs catalogs. The set list will include favorites "Square Hammer," "Cirice," "Ashes," "He Is," "Year Zero," "Rats," "Mummy Dust," "Life Eternal," "Dance Macabre," and many more.  Watch "Faith — from a Pale Tour Named Death" HERE.

Ghost has just wrapped up Leg One as Special Guest on Metallica's 25-date "WorldWired" Summer European Stadium Tour, with Leg Two set to run from June 8-20. All 2019 tour dates, including the now-complete itinerary for North America's "Ultimate Tour Named Death," are as follows:

16   Theater of the Clouds at Moda Center, Portland, OR

21   So. Okanagan Events Centre, Penticton, BC

* Twin Temple will support on this date

The Swedish-born Tobias Forge, who has been referred to as "the Andrew Lloyd Webber of rock," is Ghost's creative force, singer, songwriter, musician, and architect of the elaborate storylines that are woven through the band's four full-length studio albums, EPs, music videos, webisodes, and live shows, all of which advance the Ghost storyline.  Forge grew up listening to a wide array of 70s and 80s rock: Alice Cooper, Journey, Kansas, Boston, Black Sabbath, Jefferson Starship, Iron Maiden, and Foreigner.  He's a hardcore music junkie; at home in Sweden, he has a most impressive collection of vinyl, cassettes, CDs, and VHS tapes, and, when on tour, he regularly arranges for visits to local record haunts and ships back even more treasures.  He plays guitar, bass, drums, keyboards, and kazoo. Ghost's new album, Prequelle, is loosely based on The Black Plague of 14th-century Europe, a metaphor Forge hopes will apply to the societal ills of today.

Ghost's music began as being much heavier, harder, and "more metal," but over the band's recent history, their songs have evolved to embrace a more catchy, rock/pop sound.  Five of the band's songs have hit Billboard's Top 5 Rock chart — "Cirice" claimed the #4 spot in 2015, "From The Pinnacle to the Pit" went to #5 in 2016, and "Square Hammer" (2017), "Rats" (2018), and "Dance Macabre" (2018) all held the #1 spot on the Billboard Mainstream Rock Songs chart and on the Mediabase Active Rock chart. "Faith," the band's new single, was the #1 Most Added track at Active Rock Radio in its first week with 36 stations programming it. Ghost's music retains its rock edge as well as its dark lyrical themes like The Black Plague, the Antichrist, the Inquisition, avarice, and the Apocalypse. Ghost has received three GRAMMY nominations: "Best Metal Performance" in 2016 for "Cirice," which they won, and "Best Rock Album" for Prequelle and "Best Rock Song" for "Rats" in 2019.