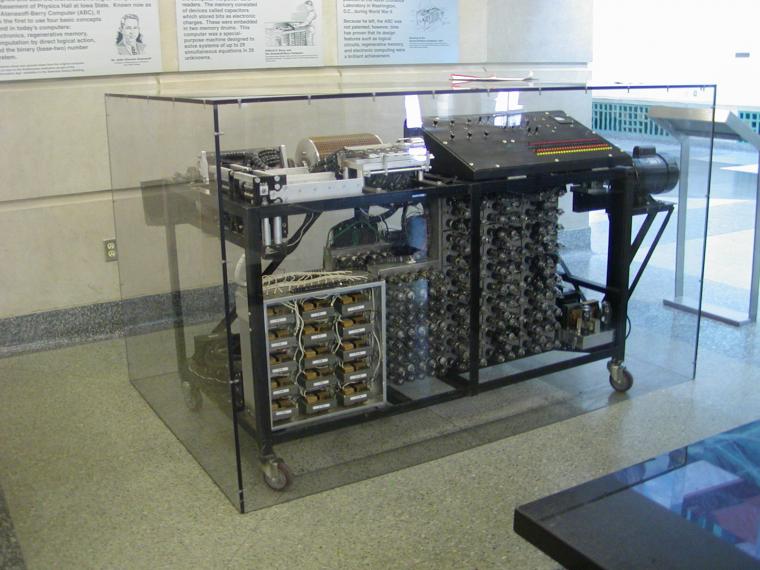 ROCK ISLAND, ILLINOIS (January 24, 2023) — Augustana College will host the “Birth of the Computer: The John Atanasoff Story” event at 6PM, February 23, in Wallenberg Hall, inside the Denkmann Memorial Building.

The event, sponsored by the college and the Davenport and Rock Island public libraries, will include a viewing of the documentary “Atanasoff, Father of the Computer.” A panel discussion will focus on John Atanasoff, the inventor of the electronic digital computer, and his ties to the Quad-Cities area. A reception will follow at Bent River Brewing Company, 512 24th St., Rock Island.

The event is one of more than 35 activities marking the 150th anniversary of the Rock Island Public Library.

“This particular event looks at the link between Rock Island and the invention of the first electronic digital computer by Iowa State physicist John Atanasoff,” Beattie said. “He spent an evening in Rock Island in the winter of 1937-38. While here, he came up with four concepts for his first computer that are still in use in today's computers.”

Beattie helped bring the full-size replica of Atanasoff’s computer to Augustana in 1998 and said he has long held an interest in the inventor.

Atanasoff was born in 1903 outside of Hamilton, New York. He earned a Bachelor of Science in Electrical Engineering from the University of Florida in 1925 and a Master’s in Mathematics from Iowa State College in 1926.

It was while working on his doctoral thesis that he became interested in developing a better and faster computing machine. At that time, he was working with a Monroe calculator, the most advanced calculating machine at the time.

He earned a PhD in theoretical physics from the University of Wisconsin in July 1930 and returned to Iowa State as an assistant professor in mathematics and physics with a focus on creating a better computing tool.

Frustrated by his continued quest, his biography notes, he drove 200 miles in the winter of 1937 and is believed to have ended up at a roadhouse in the Quad Cities. He ordered a bourbon and wrote down his ideas on a cocktail napkin. These ideas were instrumental in his invention of the ABC (Atanasoff-Berry computer) as the first electronic digital computer.