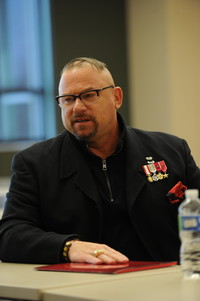 MONMOUTH, ILLINOIS (November 12, 2019) — The keynote speaker at a Veterans Day event at Monmouth College said institutions like Monmouth will play an important role in shaping the military of the future.

Brigadier General Chris Lawson (retired) spoke from experience, as he began his distinguished military career while a student at Monmouth, completing the ROTC training program before graduating in 1988.

"Americans are movie stars around the world," he said at a Monday afternoon ceremony in the Veterans Memorial Great Room of the Center for Science and Business. "We're recognized as being different, as protectors of the free world. That's a tremendous responsibility, and one which we should not take lightly. We are the police officer of the global commons on the high seas. There's no rule of law there. In space tomorrow, we'll have the same challenge."

Brig Gen Lawson said the changing nature of the behavior of war — which will include an emphasis on cyber-warfare, currency-manipulation, and clandestine efforts — will make a liberal-arts education even more valuable.

"It's important to get an education from institutions like Monmouth College," said Lawson, who recently retired from the military. "There's a complexity to these things, and I'm deeply-grateful for the well-rounded education I received here and for the experiences I had here. It means the world to me to be here today."

An important part of Brig Gen Lawson's military career has been service in other countries, giving him a global perspective that is increasingly necessary. He said military service provides an opportunity "to see some things that change your life."

One example he cited was seeing how Iraqis reacted when Barack Obama was elected president in 2008.

"Here's an African-American man with an Islamic name being elected president of the United States," said Brig Gen Lawson. "For Americans, maybe we think sometimes that democracy is just another form of government. But in Iraq, there was cheering in the streets of Baghdad. Their reaction was more like 'This democracy stuff works.'

"It's my belief that the Arab Spring that followed shortly after (in 2010) was inspired by what they saw happen in America. Our democracy means a whole lot to a whole bunch of other people around the world."

While "patriotism" is an important word on Veterans Day, Brig Gen Lawson said that service to one's country is just part of the experience for members of the military.

"A service member will know that they serve for their brothers and sisters they serve with," he said. "It's not necessarily about country. Military service is about people."

Brig Gen Lawson shared three "miracles" from his military career, including an early indoctrination into the importance of what service could mean while he was on a medical mission in Bolivia in 1988. There, he witnessed a lifeless child being brought into his medical unit and walking out on her own after being administered antibiotics and fluids.

He also recounted two harrowing experiences involving enemy-fire, including a 104-mm rocket that landed on the roof of his building in Iraq in 2007 and shook it like an earthquake but did not explode.

Six years later, in 2013, an improvised-explosive device blew a 50-meter hole in the perimeter not far from him, which allowed 13 suicide bombers to infiltrate the base. He called it simple "luck" that he was not killed, either by the enemy or by friendly-fire as he dashed around the base to reach the emergency-operations center.

The event was organized by Monmouth staff members Andy Davis, Marnie Dugan and Nicole Trego. Davis and Trego are veterans.

"On this day, we are commemorating the service of all veterans," said Trego, who handled the emcee duties. "We remember how men and women set aside their civilian pursuits to serve their nation's cause, defending the freedom of mankind, and preserving our precious American heritage."

Of military service, she said, "Out of blood and sweat we learned of purpose, sacrifice, tolerance, bravery, and discipline. These are solid foundation stones upon which a great nation is built."

The ceremony concluded with a solemn performance of "Taps" by award-winning Monmouth trumpeter Nick Thomas ('21) of Elmhurst, Illinois.