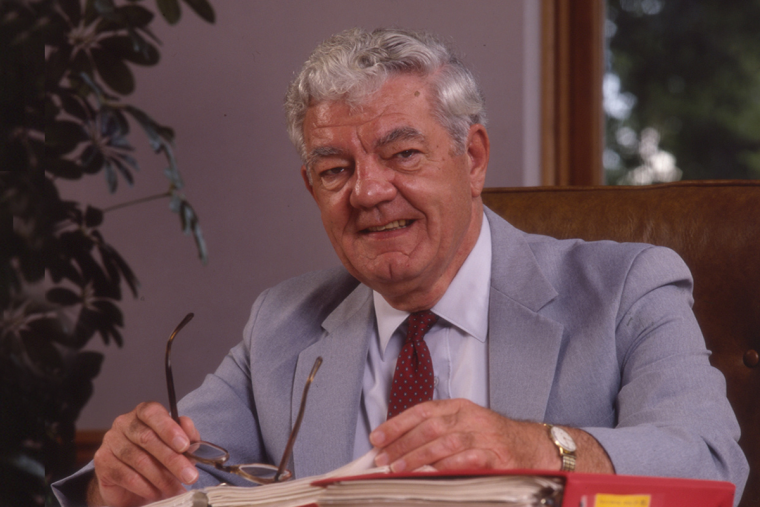 MONMOUTH, ILLINOIS (January 7, 2020) — Bruce Haywood, the tenth president of Monmouth College who helped expand the College's endowment and lay a foundation for dramatic expansion in the 21st century, died at home in his sleep January 7. He was 94.

The longest-serving president in Monmouth's modern history, Haywood came to Monmouth in 1980, when the College's endowment was $4.4 million. By the time he retired in 1994, Monmouth's endowment had grown to $24 million and the College was poised for dramatic growth. "During his 14 years as president of Monmouth College, Bruce Haywood exemplified a devotion to teaching and learning and a passion for the life of the mind," said Monmouth President Clarence R Wyatt, the College's fourteenth president. "His energy and intellect will always be a part of the story of Monmouth College. Lobie and I join the entire Monmouth family in holding Mary and Bruce's family in our hearts. We share their sadness at his passing, but also join them in celebrating a life lived full and well." Haywood came to Monmouth from Kenyon College in Gambier, Ohio, where he had spent 26 years as a professor, dean, and provost. He believed so strongly in the vital role of liberal-arts colleges that he had once turned down a deanship at the University of Michigan. His said his goal was to "return Monmouth to being the liberal arts college that it once was, and to revive in it the sense of mission." Jacquelyn Condon, emerita vice president for student life and dean of students, was the first person that Haywood hired at Monmouth. "Bruce Haywood will be greatly missed," she said. "His contributions cannot be underestimated. Monmouth College has benefited significantly from his exceptional intellect, devotion to the liberal arts, commitment to financial discipline, and cultivation of donors. I, along with many others, am grateful to him not only for all he accomplished at the College that impacted so many, but also for his friendship and mentoring. I will miss him." Invigorating the classroom Among Haywood's early objectives was to develop a challenging general education curriculum at Monmouth that stressed an integrated approach to learning combined with excellence in teaching. In 1982, a National Endowment for the Humanities grant enabled six of the College's faculty members to develop new courses in support of a senior capstone requirement. The following year, Monmouth received a second NEH grant to develop new courses in language and literature, history, philosophy and religion. Haywood also secured funding to honor distinguished teaching and to establish four new endowed faculty chairs. Concurrent with his academic focus was a determination to pay off debt and renovate a campus that had been neglected as a result of that debt. Monmouth owed the federal government for borrowing money to construct student housing during the College's boom years of the 1960s. Building the campus At a class reunion in 1981, Haywood met Walter S Huff ('56), a former accountant who had revolutionized the health-care industry through electronic record-keeping. When Huff heard Haywood speak about his vision for Monmouth, he immediately wrote a $25,000 check for the College. Huff later gave $250,000 to help finish work on the gym. In 1983, when Haywood was laying the groundwork for Monmouth's first major campaign since the 1960s, he needed pledges for one-third of the $15 million goal before the campaign could be announced. Huff believed so strongly in Haywood's vision that he agreed to fund the entire $5 million. It was one of the largest gifts to a US private college that year and effectively doubled Monmouth's endowment at the time. Through Huff's leadership, the campaign raised $18 million, nearly $13 million of which was dedicated to the endowment. Huff's generosity also inspired other alumni to make major gifts that helped initiate a transformation of the campus, which had seen no new construction in nearly two decades. A landmark of Haywood's legacy is the Wells Theater, which was dedicated in 1990, replacing an old wooden little theater that dated to 1902. A life of service, scholarship A native of England, born to a lower-middle class family in Yorkshire, Haywood enlisted in the British Army upon completing grammar school. After serving in the infantry, he was admitted to British Intelligence School and was sent to Germany to serve with the US Counter Intelligence Corps in the American Enclave of the British Zone of Occupation. Following World War II, Haywood returned to Yorkshire, where he studied French and German at the University of Leeds, before emigrating to Canada, earning a bachelor's and master's degree at McGill University. He was then awarded a teaching fellowship at Harvard, where he taught German for three years and earned a doctorate in German language and literature. In 1954, he went to Kenyon, where he was the first to propose making it co-educational, a step which preceded similar actions at other prestigious men's colleges. Haywood became a United States citizen in 1957. Haywood was the author of four books, including The Essential College (2006), in which he wrote: "Liberal education is vital to the future of the Republic. The essential college, its future now threatened, has inspired many generations of Americans to seek a purposeful life, rewarding to themselves and to their society." His book Bremerhaven: A Memoir of Germany, 1945-1947, which tells the story of his intelligence work in Germany following World War II, is currently being developed as a film property. Haywood's first wife, Gretchen, died in 2003. He was also predeceased by their two daughters, Elizabeth and Margaret. Haywood retired to Galesburg, Illinois, where, in 2008, he married Mary Bailey, a 1976 Monmouth graduate, who survives. Also surviving is his son-in-law, Andrew Youngquist of Monmouth. Haywood was presented with Monmouth College's Distinguished Service Award upon his retirement, and the Haywood Business Wing of the Center for Science and Business was dedicated in his honor in 2013. Memorial services are pending.