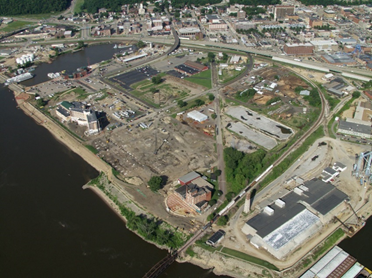 The city of Dubuque, Iowa, has used brownfields funding for a remarkable turnaround in the North Port area.

“Time and time again in Dubuque, EPA Brownfields grants have helped the city and its residents start down the path of impactful redevelopment,” said City of Dubuque Project Manager Steve Sampson Brown. “Many of our Brownfields sites historically had too many unknowns, and private developers had no interest in spending their own money to figure out what contaminants were present on these sites and how to deal with them. Strategic utilization of assessment-grant funding has allowed the city and brownfield property owners to define the extent of contamination at these locations and also establish a redevelopment framework that affordably allowed for many of these blighted sites to be redeveloped. Once the extent of the contamination problem was delineated, private developers became willing to get involved.”

“The modest Brownfields grants have now leveraged over half a billion dollars in public and private investment. It has brought educational, recreational, business, and entertainment options to residents and visitors alike,” said City of Dubuque Economic Development Director Jill M Connors. “We estimate 1 million visitors a year to the North Port. Most importantly, it has reconnected our residents to the river. Dubuque has since made use of nearly a dozen Brownfields grants to transform our downtown, which was first populated in the early 1800s, into a clean, thriving, mixed-use asset to our community.”

“Without redevelopment opportunities, urban and rural communities — even those with deep historic roots — can eventually wither,” said EPA Office of Land and Emergency Management Assistant Administrator Peter Wright. “Brownfields remediation and revitalization supports communities by investing in the redevelopment of existing properties in the community.”

Over the past three years alone, EPA has assessed 6,572 properties, completed clean-ups at 638 properties, and made 2,900 properties ready for anticipated reuse. Over this same period, more than 43,000 jobs have been leveraged as a result of Brownfields actions.