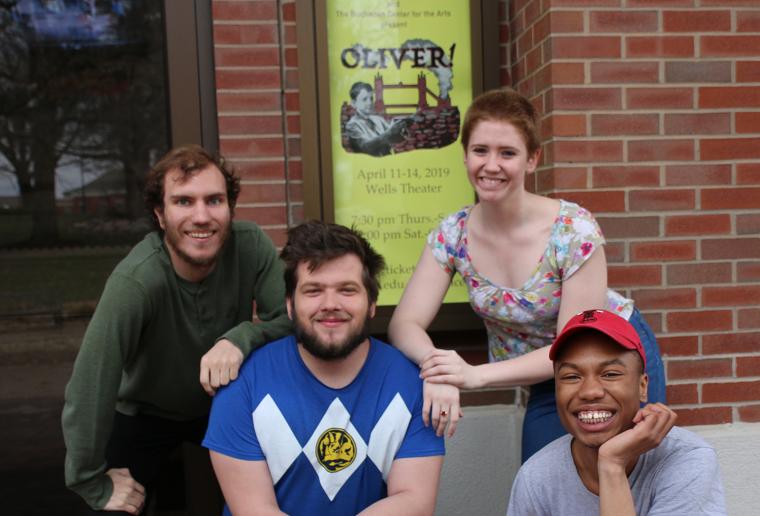 Monmouth, IL (April 8, 2019) — When the four senior theatre majors who are appearing this week in Monmouth College's production of Oliver! gathered recently, Amanda Grissom likely spoke for most of them when she said she came to campus as a "terrified" freshman.

The seniors are all different versions of themselves from those first days on campus in fall 2015, and audiences have been able to watch some of that transformation play out on stage.

"The biggest thing I gained from being in theatre, and from being at Monmouth College, in general, is the amount of confidence I have now," said Grissom, while standing alongside classmates Terry Harris, Miles Rose, and Billy Savage. "I was terrified and anxious as a freshman, but I'm leaving here confident in my skills."

She said her pivotal time was her junior year.

"Everything kind of fell into place that year," recalled Grissom, who said her increased confidence made it possible for her to commit to a semester abroad that spring in Florence and London. "The confidence and self-assurance I've gained has been incredible."

"Theatre has helped me a lot more than I really realized," said Savage, who served as president of the theatre organization Crimson Masque. "Looking back, I wasn't a very outgoing person. Being in theatre made me more outgoing and happy and energetic. I see myself now as someone who can take on a leadership position. I have the confidence now to say 'I can do this.'"

Harris credited his time on the stage and in theatre classes for helping him "learn how to work with people."

"And I also learned how to watch something grow - watching our productions take shape and grow into this massive thing. Coming to Monmouth and doing theatre was the best decision I ever made," he said.

Rose's growth took him from "a freshman just trying to get my head into the game" into someone who's tapped a variety of creative outlets, including playwriting.

"At the end of my sophomore year, I was wondering, 'Is there anything I can do besides act?' Oliver! director Vanessa Campagna said, 'What if you try writing a play for (that August's) FusionFest?' When I wrote that first play, I felt like I was finally able to do something with theatre besides act. It turned out really well, and my second one turned out better. It feels great to say I've developed a more interesting style."

And Campagna said it's been a joy to watch the four grow, both on the stage and in life.

"Each of the graduating seniors entered with a general curiosity and an interest in theatre," she said "For four years, they've committed to study and to applying knowledge in the context of production work. Notably, they've all worked in multiple areas: acting, playwriting, design, tech and dramaturgy. I'm confident they are leaving prepared to make positive impacts in their communities vis-a-vis their artistic work and through their other passions. I'm proud to now see them as competent theatre generalists and liberal artists."

Name: Amanda Grissom Hometown: Eldridge, Iowa Oliver! Role: Mrs. Sowerberry, Bread Seller, Ferah Favorite Role: Hermia, Peaseblossom and Snug in A Midsummer Night's Dream Why: "All three roles were extremely different, and it was a rewarding challenge to show those differences and be true to each character." What's next: An apprenticeship at Interlochen Center for the Arts in Michigan Long-term: Moving to a city and creating theatre

Name: Terry Harris Hometown: Chicago Oliver! Role: Dr. Grimwig, Fagin's gang Favorite Role: Puck in A Midsummer Night's Dream Why: "Puck was so active, and I'm an active and energetic person. Plus, it was my first Shakespeare play." What's next: Community theatre in Chicago Long-term: Graduate school to study film; eventually hopes to open his own dance studio

Name: Miles Rose Hometown: Princeton, Ill. Oliver! Role: Fagin Favorite Role: Presly Stray in The Pitchfork Disney Why: "It really pushed me to my limits as an actor to learn how much I can handle." Included among his character's three monologues was one that lasted 15 minutes. What's next: Also a music major, he hopes to play music wherever possible, potentially on cruise ships Long-term: Be a songwriter, composer or playwright, or all three

Name: Billy Savage Hometown: Hickory Hills, Ill. Oliver! Role: George, Londoner Favorite Role: Peter in And Baby Makes Seven Why: "Paula Vogel's work pushes the boundary, and it was physically my most complicated role. The role taught me that I'm OK with not being normal." What's next: Also a political science major, he plans to take a year off to work while preparing for law school Long-term: Be a civil defense lawyer. "There are a lot of people experiencing injustices today, and people need someone to stand up for them."