Hall of Fame Sports Broadcaster Joe Tait, Who Died Wednesday, Got His Start at Monmouth College 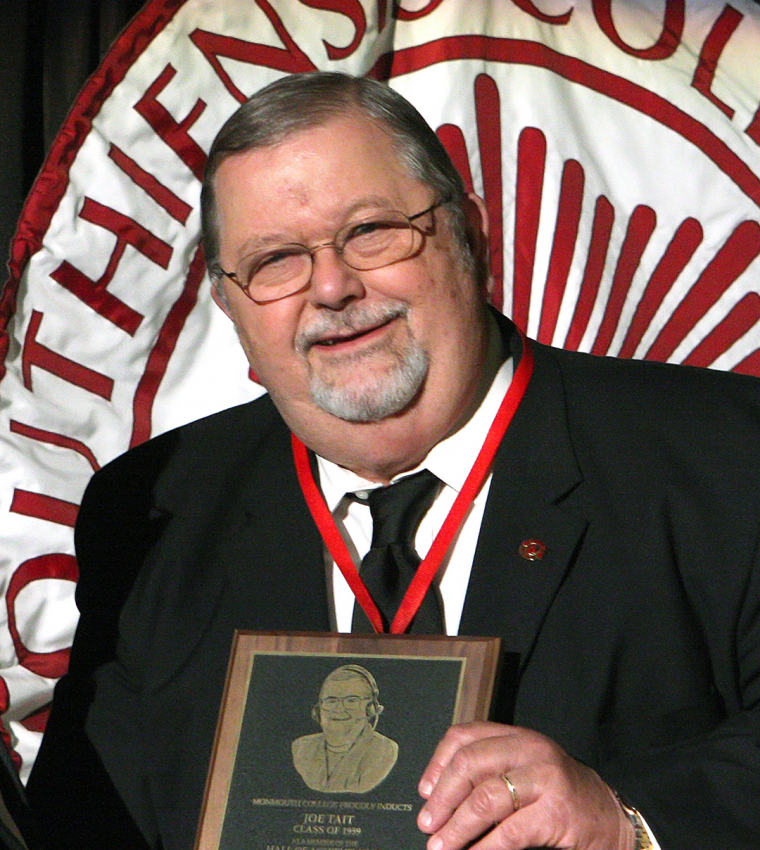 MONMOUTH, ILLINOIS (March 11, 2021) — A sports broadcasting legend who died Wednesday got his start as a Monmouth College student.

Joe Tait, a 1959 Monmouth graduate and the longtime voice of the NBA's Cleveland Cavaliers, died March 10 at the age of 83.

Tait began his sports broadcasting career while serving as a manager for the Fighting Scots' football and basketball teams. When the clock was running at basketball games, Tait would sit on the stage of the old Waid Gymnasium doing play-by-play into a tape-recorder.

Tait also served as the College's sports-information director in 1956 and 1957 and announced Fighting Scots games for the new WRAM-AM radio station in Monmouth until his graduation, also selling the advertising that made broadcasting the games possible.

In his 2011 autobiography, Joe Tait: It's Been a Real Ball, co-authored with his longtime friend Terry Pluto, Tait recalled his early days in the profession in Monmouth, offering a valuable lesson for today's college students.

“I wasn't paid anything by the SID department,” he wrote. “Three papers used my stories. ... None of them paid me, either. I didn't care. I was happy to get my work out there. Too many kids worry about what a job will pay rather than what the job can do for them in terms of experience.”

In 1970, Tait became the radio voice of the expansion Cavaliers, known for signing on with the catchphrase, “It's basketball time at the Coliseum.” With the exception of two seasons in the 1980s and illness during his final season, Tait was the voice of the Cavaliers through the 2010-11 season.

Discovered at a Monmouth football game

The link between Tait's work in Monmouth and his entry into the world of big-time professional sports was future NBA Hall of Famer Bill Fitch, who Tait first interviewed when Fitch was a young basketball coach at his alma mater, Coe College. At the time, the Kohawks were a member of Monmouth's league, the Midwest Conference. Although Fitch coached basketball, he also was an assistant for Coe's football team, and as he scouted Monmouth's fall games, he spent time with Tait in the press box.

“Monmouth was horrible in football,” said Tait. “[Fitch] used to kid me how I could make the worst team he ‘ever saw sound like Notre Dame.’ I was very enthusiastic back then.”

In 1970, the Cavaliers returned from a long, season-opening road trip, losing all seven games by an average of 17 points. The woeful expansion team had not yet hired a broadcaster. Fitch, their rookie head coach, spoke up.

“I know just the guy,” said Fitch. “He used to make the worst football team that I ever saw sound good.”

For most of the previous decade, Tait had bounced around from small town to small town, up and down the dial, keeping all the rejection letters he received along the way as he attempted to break into larger markets (he also spent three years in the Army Security Agency in Turkey and Germany). But when he was hired by the Cavaliers, those days were over — Tait called more than 3,000 NBA games.

For 31 years, Tait was the TV voice of the Mount Union Purple Raiders, a perennial power in small college football. As the Fighting Scots' own fortunes on the gridiron improved, Tait always hoped that Mount Union and Monmouth would meet in the Division III championships game. A multiple winner of the Ohio Sportscaster of the Year Award, Tait was also known to take time during his broadcasts to deliver updates on Monmouth College men's basketball.

It was Tait's ability to weave stories into his broadcasts that made him such a treasure to the sports fans of northeast Ohio. When he was inducted into Monmouth College's Hall of Achievement in 2009 — the highest honor the College bestows upon alumni — he did not disappoint, sharing how his “in” at the local radio station helped him gain a passing grade from a demanding professor and, ultimately, graduate from Monmouth.

“Professor (Bernice) Fox is the reason I am standing here tonight,” said Tait, who had been inducted into the College's M Club Hall of Fame in 1991. “My senior year, I worked full-time at the local radio station, and her Greek mythology class started at exactly the time my show went off the air. I needed that class to graduate, but I just couldn't get there in time.”

His repeated absences led Fox to tell him that she would have to fail him.

“As I was leaving (her office) ... all I could think about was 'How am I going to tell my father?’” said Tait. “As I got to the door, she said, ‘There is one thing we may be able to do to save you. I get up at 7 each morning. ... What would really make my day is if you could play a Perry Como record on the radio each morning at 7:45. If you do this, I will pass you.’”

Years later, Tait said he was telling that story to then-president Bruce Haywood, who was skeptical and told Tait he would ask her about it next time he saw her. Tait, who had promised Fox never to say a word, was horrified.

“I didn't realize she was still alive,” he said.

When Haywood eventually confronted Fox and asked if the story was true, Tait related, she stared him right in the eyes and replied, “Guilty as charged!”

In a piece published shortly before Tait died, Pluto wrote about how Tait treated his fans in the Cleveland area: “He showed me how to appreciate the readers, and in this case, the listeners. These people do pay your salaries; they do care.”

Pluto said he's received emails from fans sharing memories of meeting Tait out in the community and of Tait's time on the airwaves, remembering some of his signature calls, including "Wham, with the right hand!"Condolences from around the nation have poured in for Tait, including this tweet from LeBron James:

“Rest In Paradise my friend!! You'll be extremely missed here!”