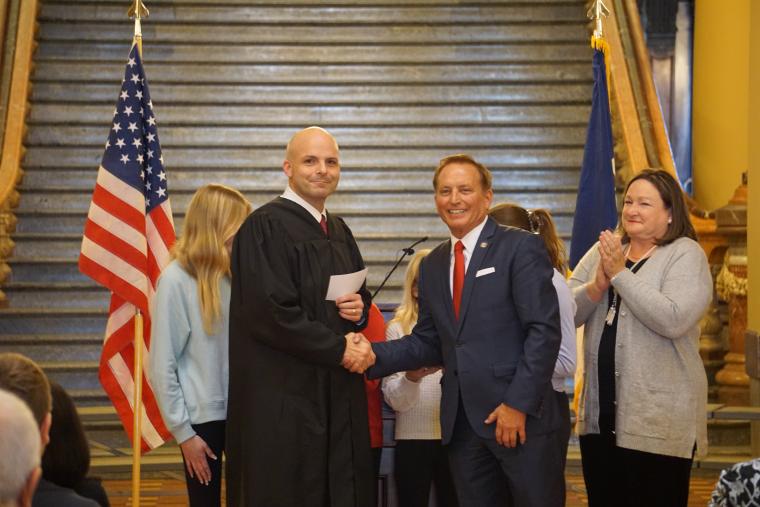 Sec Pate has dedicated his life to public service. Now in his fourth term as Secretary of State and Iowa’s Commissioner of Elections, he is guided by three core principles: service, participation, and integrity.

“It’s an honor to continue to serve the people of Iowa as your Secretary of State,” Sec Pate said during his swearing-in ceremony on Friday. “I’ve brought together a talented team that will provide excellent services to constituents across all 99 counties. Whether you’re registering to vote or setting up a business for the first time, you can count on us to carry out our mission of service, participation, and integrity.”

During Sec Pate’s last three terms, he’s revolutionized the office by catapulting it into the 21st century. Some examples of his leadership are modernization of the business services division by implementing Fast Track Filing in 2018; collaboration with the Legislature to launch Safe at Home, an address-confidentially program for victims of certain violent crime in Iowa; and the launch of Iowa Businesses Against Trafficking (IBAT) in 2022.

During his tenure, Sec Pate has also instituted online voter-registration and created an opportunity for eligible seventeen-year-olds to register to vote in Iowa. He is a past president of the National Association of Secretaries of State (NASS) and currently serves as a Co-Chair of the NASS Election Committee. Under his leadership, Iowa is ranked one of the top three states in election administration, according to the Massachusetts Institute of Technology.

Sec Pate is a nationally-recognized small-business leader, a father of three, and a grandfather of five. He and his wife Jane live in Cedar Rapids.

Michael Ross, Deputy Secretary and Chief of Staff. Ross previously served in Sec Pate’s first administration from 1995-1998. He is the former Chief Operations Officer for Christ for the City International and was founder of Urban Plunge, a social-service organization focused on the needs of individuals in under-resourced communities.

Christy Johnson, Deputy Secretary. Johnson has served as the Safe at Home Administrator for four years and was promoted to her position in August of 2022. She is currently serving as the Vice President of the National Association of Confidential Address Programs. Johnson achieved her Master’s of Public Administration from Troy University and her undergraduate degree from Iowa State University.

Heidi Burhans, Director of Elections. Burhans has served as the state’s election director since February 2019 and is the Chairwoman of the Iowa Voter Registration Commission. She is a former Madison County Auditor and Commissioner of Elections and is a graduate of Roosevelt University and Leadership Iowa.

Kevin Hall, Communications Director and Public Information Officer. Hall has served in this role since 2015. Previously, he has been a television anchor, reporter, radio host, political analyst, and consultant. Hall is a graduate of East Carolina University.

Kyle Phillips, Chief Information Officer. Phillips has more than thirty years’ experience in the information-technology and cyber-security fields. He has served in the Secretary of State’s Office since 2001 and is a 1989 graduate of Iowa State University.