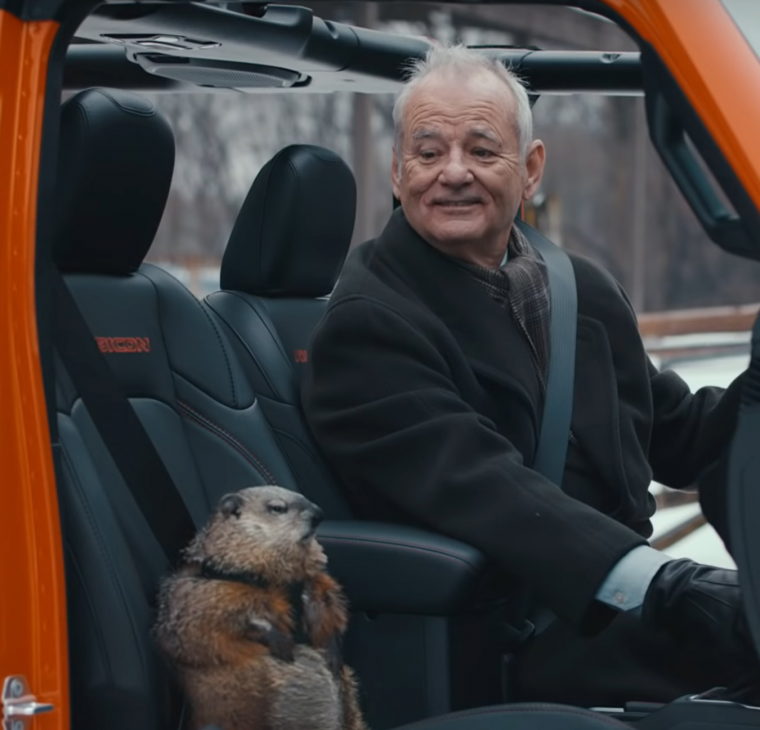 MONMOUTH, ILLLINOIS (February 5, 2020) — On Groundhog Day, Jeep aired an advertisement that people are watching over and over again.

Monmouth College students in an advertising class taught by Tom Prince chose that commercial, which featured Bill Murray reprising his famous role from the 1993 movie Groundhog Day, as their favorite among the spots that aired during Fox's broadcast of Super Bowl LIV on Sunday. "Bill Murray hit it out of the park," said Prince of the ad, which featured Murray getting more and more eager to get out of bed to relive a day in which he kidnaps a groundhog and escapes in a bright orange Jeep Rubicon. That put the class in agreement with a national poll by USA Today, which also had Jeep's ad at the N°1 spot, followed closely by Hyundai's "Smaht Park" and Google's emotional ad, "Loretta." Prince's class had the Google ad in their N°2 spot, followed by "Baby Nut" by Planters, and a tie between Sodastream's "Mars Water" and the Pringles ad "Rick and Morty." Prince prefaced his annual class discussion about the Super Bowl ads by telling the students how important the National Football League is to television and how important this particular Super Bowl was to the NFL. "The NFL is the biggest game in town," he said. "It's what's keeping regular broadcast TV alive." Prince, who serves as a lecturer in the College's political economy and commerce department, then did a quick class-survey. "How many of you regularly watch a sitcom on broadcast TV?" he asked. Not a single hand went up. "I rest my case," he said. Prince said the NFL paid particularly close attention to this Super Bowl because of its collective bargaining agreement, which is due to expire at the end of the 2020 season. With 102 million viewers, up 1.3 million from a year ago, and with ads costing around $5.6 million for 30 seconds, the NFL came away happy. "The NFL can make some concessions to the players' union, because they know the advertising revenue is going to be there," said Prince. "It's projected that in the next negotiations, network rights are going to cost more than $10 billion." Prince asked the students about their favorite ads and ads that had the most impact, as well as commercials where the companies "laid a giant egg." For the latter category, Prince's students chose spots by Heinz and Pop Tarts as the worst they saw, with Pop Tarts finishing almost at the bottom of the USA Today poll, as well, along with ads for Squarespace ("Winona in Winona") and Quibi. "I've told you that there's a lot of money wasted in advertising," said Prince. "The Pop Tarts ad is proof." However, even though Super Bowl advertising costs millions, it can be a wise move if done well, said Prince, who noted that companies can get the word out about their product or service at a cost of, essentially, "a nickel per viewer." The class also ranked the Google ad, which was one of several that played on the heartstrings, as "most effective," with ads for Hulu Live sports (with NFL player Tom Brady), emotional ads for New York Life and Budweiser, and the "Smaht Park" ad rounding out the top five.