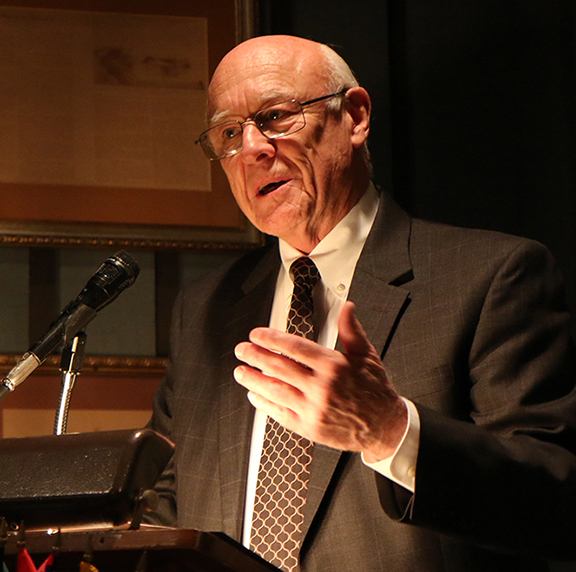 MONMOUTH, ILLINOIS (March 18, 2021) — For a third of a century, Monmouth Rotarians have engaged in a friendly competition to forecast the year's US economy.

To help them make an informed guess about what 2021 holds, the Rotarians turned once again to Monmouth College emeritus professor of economics Ken McMillan, whose chief message to the group at its March 15 meeting was simple: “The economy is basically sound.”

That was also McMillan's message during his 2020 Rotary talk, which the group used for its annual economic forecast that dates to 1989. A global pandemic made for some challenging and tragic times in the meantime, and the US economy had a very rough second quarter in 2020, but McMillan's outlook for 2021 is still encouraging.

“The economy is basically sound,” he said as he wrapped up his 30-minute talk. “The problem is, we had a huge jolt. . . As a result, everyone is on pins and needles with uncertainty. We've got reduced consumer confidence, and we've got a lack of business confidence. [Businesses] are not going to expand when they'd just like to get back to normal.

“But all signals are there for us to have a sound recovery as we move forward. . . My biggest concern is the potential for inflation,” he said, calling inflation the “elephant in the room.”

If there is inflation, McMillan said it would be the first time it's had a drastic effect on the US economy in nearly 40 years.

First, he defined the term, saying it shouldn't be used when talking about price increases in only a few areas.

“[But] when there is a wide array of price-increases — when the overall level of prices, basically everything in the economy, goes up — that's inflation,” he said. “Everybody's dollar buys less. We can't buy as much as thought we could with our dollar. . . It basically amounts to too many dollars chasing too few goods.”

McMillan said that although the three stimulus packages provided by the federal government over the past year have been welcomed by many, they do tend to lead to inflation.

“With stimulus checks — where money is put into consumers' pockets without goods and services being produced — we're increasing demand, but supply has not kept pace with it,” he said.

“There's a shortage of a lot of things out there,” he said. “When there's more money chasing fewer goods and services, inflation is likely to result.”

McMillan said that government intervention generally has an adverse effect on the economy, but he acknowledged there was little choice but for the federal government to take action during the pandemic because of extraordinary challenges.

“I believe in markets more than I believe in government,” he said. “I think the government shouldn't start messing with the economy, but in the case of something like the crisis with COVID and the disaster that resulted, that is the time for the government to step in.”

McMillan pointed to the good economic news of last year's third quarter as a strong indicator of his main point about the overall soundness of the economy.

“There was quite a significant upturn in the third quarter,” he said. “To me, that's the greatest single evidence that our economy is really sound.”

Employment figures were also a positive indicator, and he said prospects in that area are good, in the long term.

“The unemployment rate never got as high as I would've expected,” he said.

As gas and energy prices rise, effects will be felt by agricultural operations, but that alone won't determine the kind of year that area farmers have.

“But the main thing for the ag economy is, we have no idea what the weather is going to do,” said McMillan.

During his 2020 talk to Rotarians, McMillan was spot-on when he recommended buying stock in Kimberly-Clark, which produces toilet paper. The stock saw a 33% increase in the five months following his talk.

He closed that 2020 talk, given only days before massive shutdowns due to the pandemic, with the following words and an overall message he still strongly believes: