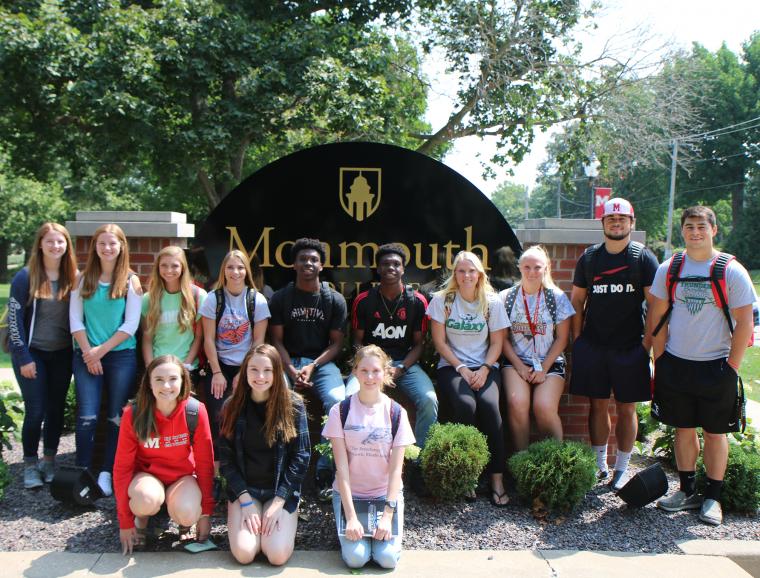 MONMOUTH, ILLINOIS (May 19, 2022) — The students who made up the headline-grabbing number of siblings in Monmouth College's incoming Class of 2022 racked up a considerable number of accomplishments during their time on campus, and they were still making news on their final weekend at the school.

Kara Fisher, Jonathan Oradiegwu and Jordan Peckham — who came to Monmouth as a freshman in 2018 along with one of her triplet sisters — all won individual track and field events at the Midwest Conference Championships.

Peckham, who studied biochemistry, graduated Sunday, along with Fisher and her twin sister, Courtney, Oradiegwu and his twin brother, Joseph, and five other sets of twins — Jordyn and Payton Gosell, Jenna and Jessica Pauley, Kaleb and Kody Plattenberger, Emma and Nicole Poole, and Matt and Sara Simonson.

"A lot of them were in my major, and Jon and Joe were both on the track team with me," said Peckham, whose sister Payton attended Monmouth for one year before hamstring issues forced her to leave the track team and enroll elsewhere. "It comes up a lot — there's a lot of them."

"We knew the Simonsons, but it was crazy to find out there were so many other sets of twins, and that we're all so different," said Emma Poole.

Which one is which?

"Sometimes, coaches try to say 'Hi' to us," said Courtney Fisher, who was not on the track team with her sister. "One time, [track] Coach [Brian] Woodard started talking to me about track practice."

There was an awkward silence.

Kara said that she and Courtney were fairly similar to each other as students at Monmouth-Roseville High School. College brought a shift in that dynamic.

Nicole Poole was asked if she and Emma get mistaken for each other.

"All the time," she replied.

Unlike some of the twins, the Gosells were together nearly all the time, both majoring in exercise science and psychology and competing on the soccer team. On top of that, they were roommates.

"I think we're ready to be apart," said Payton, who looks so much like her sister that the twins were able to walk across the stage and receive each other's diploma at their graduation from Grayslake Central High School. They didn't repeat the stunt at Monmouth's ceremony (at least we think they didn't — we're not entirely sure).

They said their similar looks came in handy during all the classes they shared.

"You don't get called on in class as often, because the professor doesn't want to call on the wrong one," said Payton.

Jordyn said she and her sister knew all along that they'd attend the same college.

"There was no going somewhere else without each other," she said. "We told all the people that recruited us, 'We come as a package. If you don't want both of us, you can't have one of us.'"

Monmouth's coach at the time, Nick Rizzo, was certainly happy to receive the Gosell package, as both players started as sophomores as the Fighting Scots qualified for the program's first NCAA soccer tournament berth.

In contrast to several of the twins and their similar appearance are the Simonsons.

"I've had people I've all known all four years, and they just found out we were twins," said Matt, who will attend graduate school at the University of Illinois College of Medicine in Chicago. Meanwhile, Sara is also headed to grad school, but she'll be at the University of Wisconsin.

The Gosells are also headed to graduate schools in different states. Jordyn will attend Concordia University-Chicago to study clinical mental health counseling, while Payton will enroll at the Palmer College of Chiropractic in Davenport, Iowa.

Palmer is also the destination for Jenna Pauley, half of a later set of twins from the Class of 2022. While Jenna enrolled at Monmouth for the fall of her freshman year, Jessica didn't join her until transferring in for the spring semester.

Together, they played softball and helped the Fighting Scots reach the Midwest Conference playoffs this season. Both players batted over .330, and Jenna was the team's N° 2 starting-pitcher.

Initially separated when college began, the Pauley twins will be headed in different directions again, as Jessica will attend pharmacy school at Southern Illinois University-Edwardsville.

The Fishers are also separating, and it comes just before an important date.

"We're turning 22 next week, and this will be our first birthday apart," said Kara, who will be an ophthalmology technician in Geneva, Illinois. Courtney will attend nursing school at the University of Indianapolis.

Speaking of birthdays, Peckham not only shares a birthday with her sister, Payton, but also with their third triplet sister, McKenzie. And then there's a fourth family birthday near hers, as well.

"I have a little sister who's a year younger than me," said Peckham, who is headed to the University of Illinois College of Veterinary Medicine. "We're the same age for nine days, and I think those nine days are the coolest days of the year."

A unique and special group

Within each set of twins, there are distinguishing characteristics. When they all arrived at Monmouth at the same time, each set of siblings needed their own descriptor, as well, as it wasn't enough to simply say, "I'm meeting the twins to study."

"So we had to start using 'the basketball twins' [the Oradiegwus], 'the soccer twins' [the Gosells], 'the track twins' [the Peckhams]," said Payton Gosell.

The Oradiegwu twins are both returning to their home in Richmond, Texas, to study for the Medical College Admission Test. In the meantime, Jonathan will work as a scribe for Memorial Hermann Sugar Land Hospital.

There were also "the football twins" — Kaleb and Kody Plattenberger. Kody will work for State Farm in Moline, Illinois, while Kaleb will teach high school physical education at Farmington High School.

The Pooles belonged to two subsets - the twins from United High School just outside of Monmouth, where they'd become best friends with the Simonsons — and the twins whose parents worked at the College, a distinction shared by the Fishers.

At the graduation ceremony, College painter Dana Poole was on stage to present diplomas to his daughters, while student life administrative assistant Heather Fisher did the same for hers. Poole, who serves as president of the United School District Board of Education, had also presented his daughters' diplomas when they graduated from junior high and high school.

That's a tremendous honor for any parent, and a memorable moment for their child, as well. It will add one more layer to what is already a unique and special time for all the siblings.

"I feel honored to be a part of this group," said Emma. "I think it's really cool."