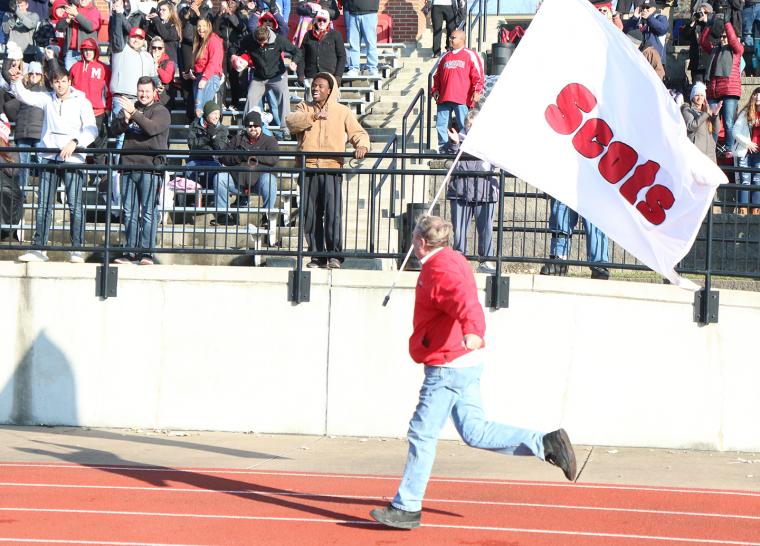 MONMOUTH, ILLINOIS (May 25, 2022) — This year's recipient of Monmouth College's Hatch Award for Distinguished Service was honored for work he's done on campus in the past year, but it was also a lifetime achievement award, of sorts.

"When you make the choice to be a liberal arts professor at a place like this, you do it for the students," said Hatch Award recipient Mike Connell, who's taught business at the College since 1992. "You don't get rich, and you don't get famous, but you make a lot of friends."

That countless number of friends includes one of his former students, who nominated him for the award.

"I am only one of the hundreds of Monmouth College alumni who have Professor Connell to thank for empowering them to work hard and find success," wrote the nominator.

Connell's service to the College includes his presence on a number of committees: the Tom Johnson Scholarship Committee, the Presidential Strategic Planning Committee, the Wiswell-Robeson Lecture, the Wendell Whiteman Memorial Lecture, and the Faculty and Institutional Development Committee. He chairs the latter group, which is responsible for recommending to the faculty and administration policies and procedures relative to the use and development of human and financial resources of the College.

"It's the culmination of a lot of things in the past — that was a big part of it," said Connell of the award. "This year, specifically, we had some resignations in the department, so I stepped up and taught an overload."

During the past academic year, he also chaired two search committees as the business department looks to develop an agribusiness management program.

Additionally, Connell used his position as a board member on the Community Health Foundation of Warren and Henderson Counties to help the College secure grant-funding to run its COVID Testing Center, which not only was an asset to the campus community, but the local community, as well.

For more than twenty years, he's served as the College's faculty athletic representative to the Midwest Conference. For the past year, he was president of the MWC, the second time he's held that one-year position.

"We're the balance between academics and the coaches," said Connell of those who hold faculty athletic representative roles. "Our job is to represent the needs of the students. We vote on issues like expanded schedules and subjects like that when missed classes might come into play."

In that role, Connell serves Monmouth College athletes in behind-the-scenes fashion. But there's also a much more public way he supports the Fighting Scots.

"He attends athletic events to support and encourage the student-athletes and the coaches because Monmouth College and people here are family to him," wrote his nominator.

That support includes Connell running up and down the sidelines at basketball and football games with a large handmade "Scots" flag, rousing the home crowd.

"I'm not embarrassed to support these kids," said Connell. "I tell my students that no one can embarrass them without their permission. They can be made fun of, but they can only be embarrassed if they allow it themselves."

Connell would love to have some help in that cheerleading area, as he envisions five different flag-runners at athletic events, each carrying one of the letters in S-C-O-T-S.

"Professor Connell's dedication to the College spans decades and generations of students who have looked to him for advice and mentorship," said Dean of the Faculty Mark Willhardt. "Whether he was guiding their lives as chair of the Political Economy and Commerce Department — now the Business and Economics Department — carrying the flag in support of them at sporting events, or simply being there when they needed to sound off, Professor Connell has served our students constantly and with distinction throughout his distinguished career." 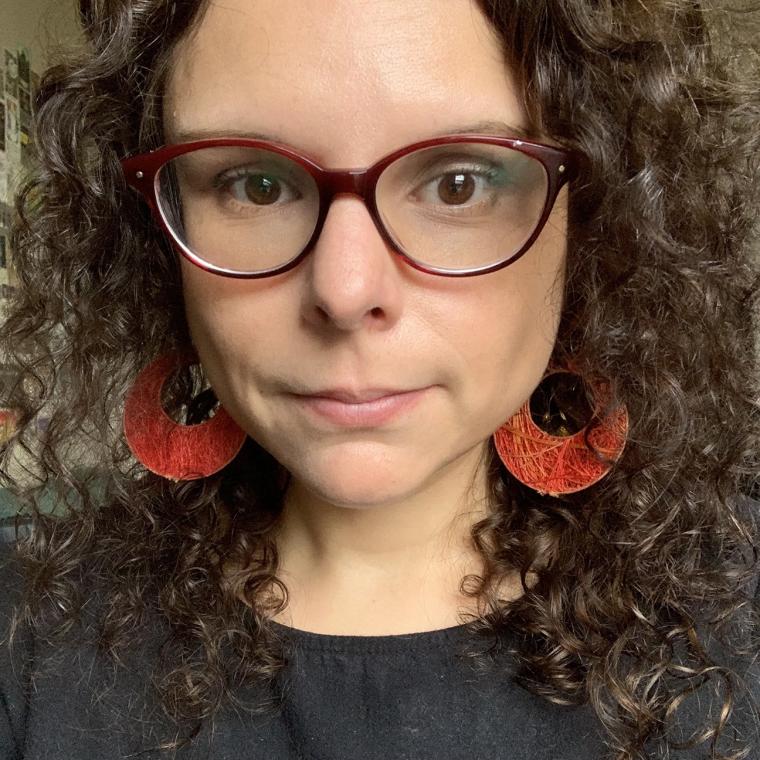 A professor who's made a name for herself internationally as a writer of both fiction and scholarly works is one of the recipients of Monmouth College's prestigious Hatch Awards for Academic Excellence.

Jennifer Thorndike-Gonzales, who chairs the College's Department of Spanish and Latin American Studies, received the Hatch Award for Scholarship and Creative Work.

The internationally-renowned novelist, short-story writer, and scholar joined Monmouth's faculty in 2017. Since that time, she's had three scholarly articles published, and two more are awaiting publication. She has also written several reviews of films and books and been a keynote or invited speaker nineteen times at fifteen different events.

"As an educator, scholar, and author, topics regarding equity and the struggles of underrepresented groups are at the core of my interventions, courses, and books," said Thorndike-Gonzales.

In the months ahead, she has two books set for release, both from Random House: a novel, Nuestras mujeres (“Our Women”) and a scholarly work, "Ser improductivo: Enfermedad, precariedad y migracion en la era de la biopolitica" ("Be Unproductive: Disease, Precariousness and Migration in the Era of Biopolitics").

"My research and my scholarly and fiction writing are all connected," she said, before discussing her upcoming novel, specifically. "It's about the indigenous people of my native country, Peru. It's in an historical context, but the story is fictitious. It focuses on the forced sterilization crimes against indigenous women in Peru's Andes region. It's about how the State controls the body."

Thorndike-Gonzales' breadth and quality of work has especially stood out to her Monmouth colleagues.

"Professor Thorndike-Gonzales' creative and scholarly output is truly outstanding," said Dean of the Faculty Mark Willhardt. "She is as comfortable working in fiction as she is charting theories of the body, and is distinguished in both areas. Maintaining her creative and scholarly excellence while chairing a department and teaching a full load is no easy task, yet she manages with aplomb."

Thorndike-Gonzales has represented Peru at several international book fairs, such as the FIL Guadalajara in Mexico, as well as fairs in Colombia and the Dominican Republic. In 2016, she was selected by the committee of the Guadalajara book fair as "one of the most outstanding Latin American writers born during the Eighties."

"I'm a person who is always reading and researching," said Thorndike-Gonzales from her office shortly after the spring semester had ended. Fittingly, she was in the midst of a six-week online course on leadership in diversity, equity and inclusion.

"I hope that I can pass that passion for reading on to my students," she said. "Reading can be hard to do today with all the different elements that consume our time — our phones and social media. But it's an activity you can use to help you rethink what you've thought before and reflect on your beliefs. It's part of the critical thinking that we teach here at the College."

Through nearly a dozen Monmouth courses she's created or modified, Thorndike-Gonzales is also passing on her "exceptional base of knowledge."

"Jennifer has applied her exceptional base of knowledge and experience developed as a scholar and fiction writer to the considerable benefit of Monmouth students," wrote her nominator for the Hatch Award. "Her focus on the world of health — on its various levels — in her scholarship and fiction has been directly applied to three of the classes that she has created and taught at Monmouth."

Examples include two courses in the Spanish major — "Health from a Cultural Perspective" and "Spanish for Health Professions" — as well as a pair of integrated studies courses — "The Secret Lives of Women in Literature" and "The Body We Inhabit: Health, Illness and Culture."

"Dr Thorndike's work as an internationally-renowned creative writer and scholar puts her in extremely select company," wrote her nominator. "The honors and press that she has received are a mark of particular prestige for Monmouth. Our students gain from the opportunity to learn from a probing intellect who is perpetually learning and skilled at sharing the insights she has gained through her exceptional efforts."