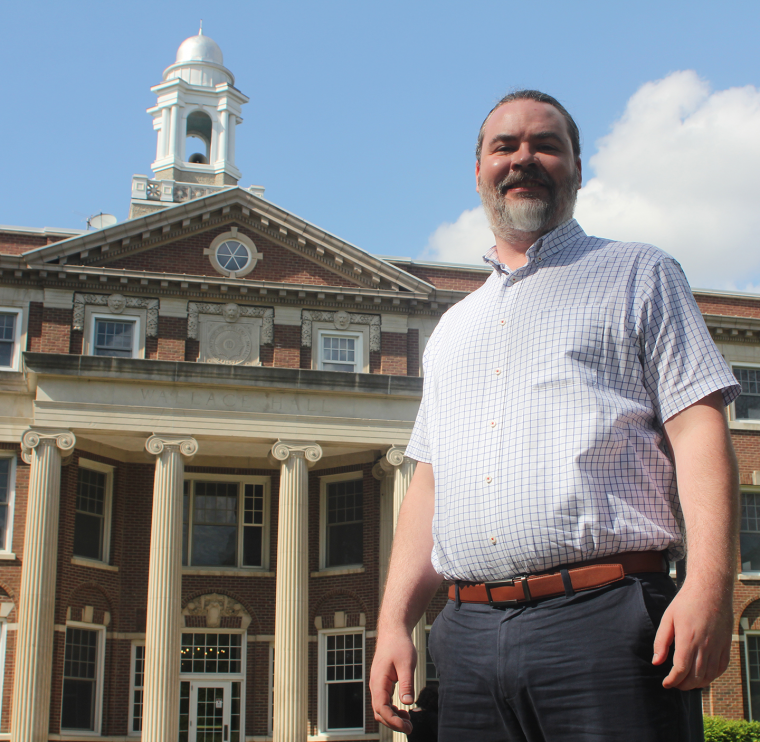 MONMOUTH, ILLINOIS (May 12, 2021) — When Director of Campus Events Ryan Doyle officially takes the reins of planning Monmouth College's Commencement next year, he may feel as though there are no new surprises that can be thrown his way.

That's because Doyle was in charge of much of the planning for this year's May 15-16 Commencement weekend - an eight-month odyssey that, due to the pandemic, seemed to change every day.

"Yes, it's taken up a lot of time," said Doyle of the planning, which began last September. "But I've had a lot of help. I've worked with [now Co-Dean of Students] Karen Ogorzalek since I've been here, and she's been mentoring me and getting me ready to pass the torch. Things have changed the entire time with this year's ceremony. There were a lot of unknowns, for sure."

When planning began for the College's 164th Commencement ceremony, Doyle and his staff were looking at last year's model, a virtual ceremony for the Class of 2020.

"At the beginning, we thought the only way we'd be able to have a ceremony would be a virtual one," he said. "But once events started happening and guidelines were loosened, we realized we could have an in-person ceremony in some respect. A lot of research went into it."

Looking into what peer institutions were planning was part of the process but, even more important, Doyle and his team sought input from the graduates.

"As restrictions started to lighten up, we had a Scots Senate roundtable discussion with the seniors, where we learned that what they really wanted was to be able to walk across the Wallace Hall stage and get their diploma," he said. "Then at the senior meeting we always have, we had more information about guidelines, and we were able to talk to more seniors and listen to what they had to say and what was valuable to them. The closer we've gotten to the date, the more Commencement has started to look like Commencement."

The pandemic still necessitated a few concessions for the ceremony. A bagpipe processional will be the only live music. The Monmouth Chorale's songs, including "A Flame of White and Crimson," will be played from a recording. All guests must have a ticket for the May 16 Commencement ceremony, and guests must wear a mask at all times and practice social distancing. Seats will only be provided to the graduates and guests with special needs."Another of the things that will be missing is a keynote speaker, but Joe Doner ('21), our Lincoln Laureate, will speak," said Doyle. "In late April, we opened it up to faculty for the processional, but we're still not able to have the faculty recessional, where the graduates walk through a line of faculty at the end of the ceremony."Doyle said 201 seniors are expected to attend the ceremony, which will begin at noon May 16 on Wallace Hall Plaza."Kudos to the students," he said. "The way that they did things safely all semester led to us being able to have this Commencement ceremony."

Throughout the day on May 15, about a dozen academic departments will hold gatherings to celebrate their graduates, some in professors' homes and others at on-campus locations. A Senior Send-Off at 8PM at April Zorn Memorial Stadium will replace the traditional Senior Gala, an indoor event held in Glennie Gymnasium.

"The Senior Send-Off is the official welcome to the graduating seniors of being in the Alumni Association," said Doyle. "The Senior Class Gift Committee will be recognized, there will be a toast by the president, fireworks and fun photos of the seniors on the scoreboard. It's more the party kind of deal, before the more formal ceremony the next day."

Also on the YouTube channel, a Virtual Honor Walk, a Virtual Baccalaureate Ceremony and a separate Virtual Commencement Ceremony will be available. The honor walk gives students the opportunity to honor individuals who have made a significant impact on their educational experience. A traditional worship service led by the graduates, baccalaureate celebrates the completing of their college journey and the beginning of their life journey.