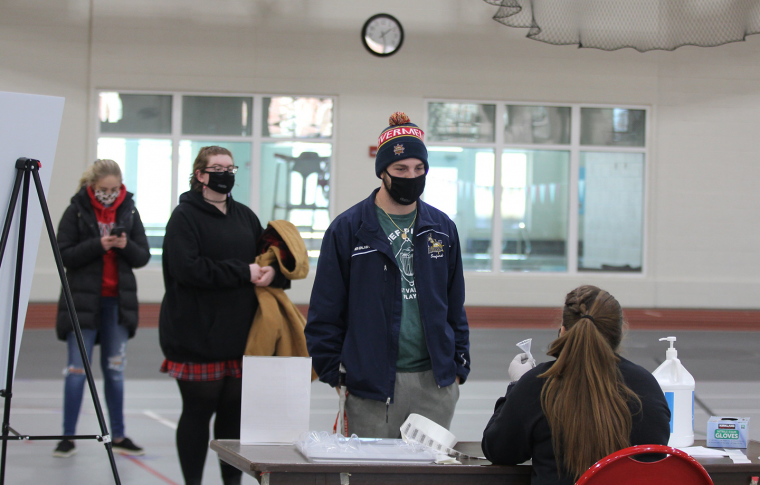 Monmouth College students wait in line during the first of three days of testing for COVID-19, January 22-24.

MONMOUTH, ILLINOIS (January 25, 2021) — On the eve of the first day of the spring semester at Monmouth College, the school received its best COVID-19 news of the past 10 months — none of the nearly 400 students, faculty, and staff who were tested for the virus on Friday, January 22, in the Huff Athletic Center came back with a positive test.

"You missed my little happy dance," said Monmouth faculty member Joan Wertz, who was one of three people who led a College task force charged with testing the entire campus community with the highly-accurate SHIELD Illinois test. The test was given over three days — January 22-24 — just in time for the start of spring classes on January 25. Fall classes ended November 24, two days before Thanksgiving, and final exams were completed remotely in early December.

"We just got the results from Friday's testing, and out of nearly 400 results there were zero positive cases," said Wertz, shortly before noon Sunday. She said Saturday's test results were expected later Sunday, with the final day's results coming in by late Monday.

The SHIELD Illinois tests were administered thanks to a $150,000 grant the College received from the Community Health Foundation of Warren and Henderson Counties. The test will be available to Monmouth-Warren County residents sometime in February. Monmouth is the only SHIELD Illinois partner offering the test to area residents, according to SHIELD Illinois officials.

It takes a campus

The weekend testing was the result of hundreds of hours of preparation by dozens of individuals across campus.

"We have been working hard over the winter break to ensure a safe return to campus for all students, faculty and staff," said Monmouth President Clarence R Wyatt. "We are most excited about our ability to test everyone upon return and throughout the year, so that we may keep our campus community as secure as possible for a strong spring semester."

Chief among those hard workers were Wertz, Executive Assistant to the President Amy Warrington and Chief Information Officer Nick Carlson.

"Nick has been doing a lot of work on the tech aspect of all this, uploading the campus community's information and helping to get this all set up," said Wertz, who said her team worked on planning the three-day event for about four weeks. "This has been an extreme amount of work. It's truly been a team effort. I'm truly appreciative of all the staff and students who pitched in this weekend to make this possible."

One of those students is Megan Davis ('21), a public health major from Chandler, Arizona.

"I thought it would be a lot more wild than this," said Davis, who was stationed at a table in the Huff Athletic Center fieldhouse, where she helped collect vials of saliva samples from the campus community. "But people really understand what they need to do, and it's gone really smoothly."

"Honestly, it's gone really smoothly," said Trettin, who also discussed providing a sample. "The thing that takes the longest for people is getting enough saliva collected. I had to stop and think of some of my favorite foods. But doing it this way is less invasive than other COVID tests, like the one that basically goes through your nose and touches your brain."

The “gold standard” of testing

College officials said the PCR test (Polymerase Chain-Reaction) being administered is the "gold standard" in COVID testing, due to its high accuracy, less-invasive process, and quick turnaround time. And that high accuracy means College officials have extra reason to be excited about zero positive cases on the first day.

"This is all going to help us feel a lot safer about being here and being in groups of people," said Wertz, who teaches psychology and serves as coordinator of Monmouth's global public-health minor.

Although everyone in the campus community has now been tested, the first three days of classes will be done remotely, said Dean of the Faculty Mark Willhardt.

"Since testing is being done to ensure the health of the community, we want to do all we can to maintain that health from the get-go," he said. "Anticipating that we will receive test results no later than Tuesday, and that we might need another day to isolate positive cases (should there be any), we will start in-person classes on Thursday, January 28."

Wertz said "mitigation testing" will continue throughout the semester, 8AM-1PM, on Tuesdays and Fridays in the Haldeman-Thiessen Science Center, located just north of the Huff Center.

"We'll test about 10 percent of the campus each week," she said. "In addition to that, anybody from campus can come in during those times and be tested."