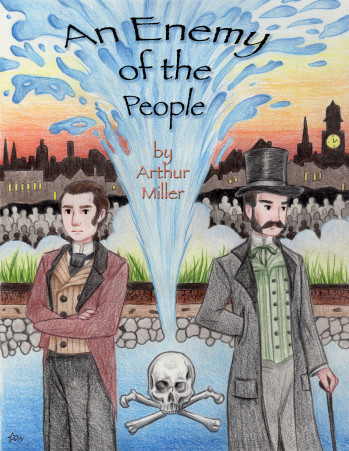 MONMOUTH, ILLINOIS (October 13, 2020) — Monmouth College will turn to two of the most influential playwrights in the history of theatre for its first full-length play of the 2020-21 theatre season.

Theatre professor Doug Rankin will direct Enemy of the People by Arthur Miller, which the American playwright based on a Henrik Ibsen play first staged in 1882. Miller's adaptation opened in 1950.

The play will be staged at the College's downtown Fusion Theatre, 230 S Main St, over the span of two weekends, opening on the evening of October 23 and closing on the afternoon of October 31.

Rankin said the current political and cultural climate in the United States makes Enemy of the People the perfect play to produce.

"It's about a doctor (played in the Monmouth production by Richard Eyre ('21) of Mount Prospect, Ill.) living in Norway," he said. "He comes up with the idea of opening a mineral spring in the resort area where he and his family live. He becomes wealthy because of it, and his family is finally a happy family with some kind of means."

About the time the family's rags-to-riches transformation is complete, the doctor notices people are getting sick, and he finds out that the water is poisoned.

"He has the dilemma of 'Do we tell people? Do we close it down? What do we do?'" said Rankin. "It's a moral dilemma that I think is very parallel to today's assault against the environment for the purpose of financial gain."

When Rankin determined a few years ago that Enemy of the People was in line to be produced at Monmouth, his mind quickly went to work, envisioning how the Fusion Theatre would make a perfect setting.

"That space just lends itself to that close-up acting," said Rankin, who also will play the role of Aslaksen in the production. "This play is about people and relationships and thoughts, and I couldn't wait. And then the pandemic came along, and we were not only daunted by the number of seats we could have, but the play basically involves crowd scenes in your face, yelling and spitting and things like that. It wasn't going to work too well."

An adjustment was required.

"The only thing I could think of was changing it to the form of a radio drama, which allows the actors to be separated a certain number of feet, and using the audience's imagination to fill in the missing parts," said Rankin, noting that the College's last radio drama — The War of the Worlds — was staged about 10 years ago.

Although Rankin and his colleagues went full-scale 1930s with set design and costumes for that radio drama, he said that wouldn't be the case with Enemy of the People.

"I felt the story was a little more important than the period style, so it's going to be a little more of a formal production of people wearing just black and white and throwing on bits and pieces of costumes of the Victorian period and sort of just ignoring the radio part, because this isn't really about the 1930s or the 1940s. It's about all time," he said.

Monmouth College will present "Enemy of the People" at 7:30PM, October 23 and October 29, and at 2PM, October 25 and October 31, at the Fusion Theatre, 230 S Main St, Monmouth. A limited number of tickets (about 25 per show) can be purchased at monmouthcollege.edu/theatre, which is also where a pass to watch the production online can be purchased. Tickets and passes are $10 for adults, $8 for seniors and Monmouth faculty and staff, and $6 for Monmouth students.