Monmouth College Students Won't Soon Forget Memphis, 14 Tons of Trash, and Their Bus in a Ditch 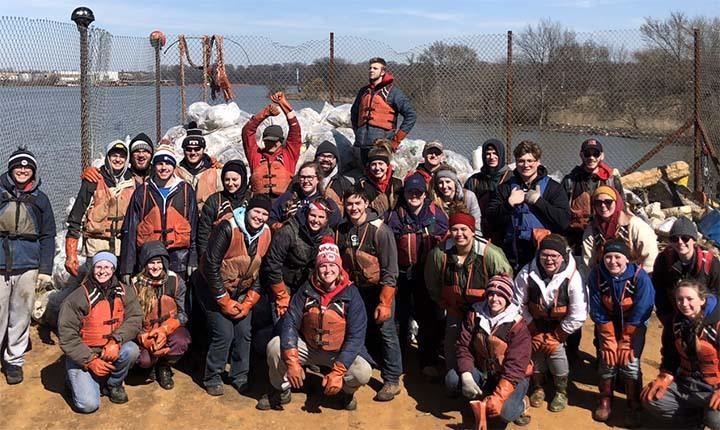 Monmouth College students took a break from their trash removal work at Lake McKellar in Memphis. Twenty-nine of the College's 57 Stockdale Fellows participated in the service trip earlier this month

MONMOUTH, IL (March 15, 2019) — Ask any of the 29 Monmouth College students who traveled to Memphis on an Alternative Spring Break service trip what their most memorable moment was, and they will surely reply, "When our bus slid into a ditch on I-55."

That accident, in which no Monmouth students were injured, was featured on local news telecasts.

One of the students, Alex Cutright (Class of 2021) of Glenwood Springs, Colorado, earned praise for the first-aid treatment he provided after the chain-reaction accident. An Illinois state-trooper stopped to assist Monmouth's bus, a car hit the trooper's vehicle, and then that car was hit.

"One of the news reports said that Alex assisted the trooper, who was clearly concussed," said Monmouth Assistant Director of Leadership Development and Service Jake McLean, who led the trip. "But Alex actually helped a woman in the car that hit the trooper. She had a pretty nasty gash on her head, and he stopped the bleeding."

The accident on the snow-covered interstate caused a three-hour delay, but it did not prevent the Monmouth group — which consisted of more than half of the College's 57 Stockdale Fellows — from realizing a memorable achievement. Once they arrived in Memphis, they removed 28,444 pounds of trash from the water, primarily the McKellar Lake area of the Mississippi River on the southwest side of Memphis.

"We were once again working with Living Lands and Waters," said McLean, who said the 29-student group was the largest he's taken on a service trip. "Chad Pegracke has set his organization's goal at removing one million pounds of trash from the river by the end of their current season."

In unspringlike Tennessee temperatures of just above freezing, the Monmouth group worked from around 9AM to 4PM on the Monday through Thursday of spring break. Most of the students' time was spent on jon boats, removing bottles and other trash from Lake McKellar. They also removed invasive species such as privet, a shrub-like plant.

"It was heartbreaking to see all that trash in the water," said Shannon Wilbourne ('22) of Chicago. "Fixing the problem requires the continued efforts of organizations like Living Lands and Waters to raise awareness and provide opportunities to affect change, but it also demands our everyday participation. We must be intentional with how we dispose of trash and remember that no action is inconsequential."

"I was sobered and disappointed by the trash in the water, but not necessarily surprised," said Grant Miller ('22) of Aurora, Colorado. "Environmental issues are huge today, and solving a problem like this completely is likely impossible. But rather than be disappointed by our inability to control these virtually-unsolvable problems, communities should do what they can to control as many environmental issues as they can, because the problem does not need to be fully solved for our societies to live in a cleaner, safer world."

In the evening hours, the group experienced downtown Memphis, taking in the sites on Beale Street and attending an NBA game, among other activities.

"I enjoyed getting to know the other Stockdale Fellows and working together," said Keegan Brown ('21) of Woodhull, Illinois. "I was amazed by how our small group worked together to pick up thousands of pounds of trash. I never knew how much trash on the streets of cities gets carried into the river."

The James and Sybil Stockdale Fellows Program is the most prestigious scholarship, leadership and enrichment program at Monmouth College. During their four years, Stockdale Fellows develop the skills and characteristics necessary to be able to lead and serve their larger community.