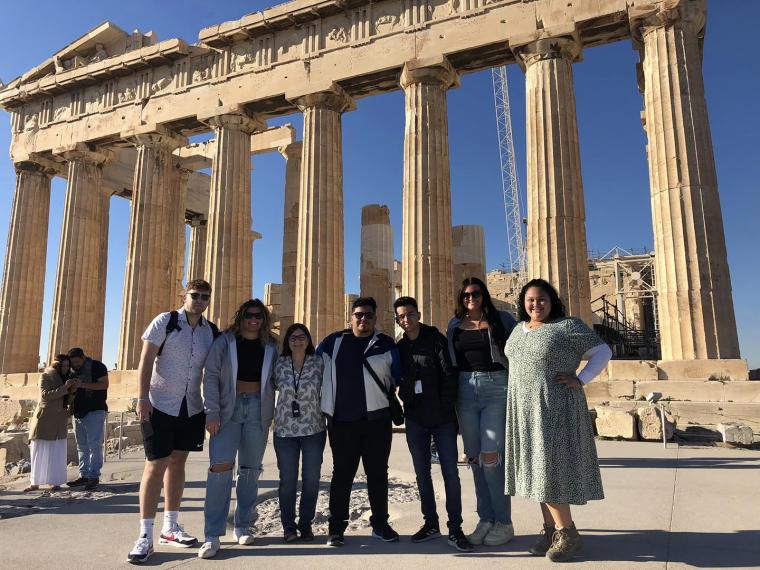 Part of the Monmouth group is pictured at the Parthenon, just one example of the "astonishing staying power" of Greek architecture that dates back roughly 2,500 years or more

Led by faculty from the College's classics and communication studies departments, the group rang in the new year in Olympia, the town that hosted the ancient Olympic games.

That location was one of the highlights of the trip for Todd Fowler ('23) of Chatham, Illinois.

"Being able to actually travel to the original sites that you admire so much and study so often was a real treat," said Fowler, a classics major. "It was almost like we were living history. For example, running on the original track at Olympia as the first Olympic champion would have also competed. Another example is walking the same path to the Oracle of Delphi as Alexander the Great once did."

Both Fowler and another student, Ben Dorn ('24) of New Lenox, Illinois, called it a "life-changing" trip.

"For a person who has studied classics and admired the subject for so long, it was truly life-changing and allowed me to walk away with new perspectives," said Fowler.

Dorn came away from the trip with a new plan for his finances.

"While traveling to Greece, I was trying to figure out what to expect," he said. "I remember sitting on the flight just in shock that I was traveling the world. When I landed in Athens, it was a dream. The whole week felt like I was in heaven, and that one week in my life was the best. After taking this trip, I won't buy the most expensive car or house. I'll use my money to travel the world. There is so much out there."

Such reactions are par for the course, said communication studies professor Lori Walters-Kramer [below], who co-led the trip with classics professor Bob Simmons. 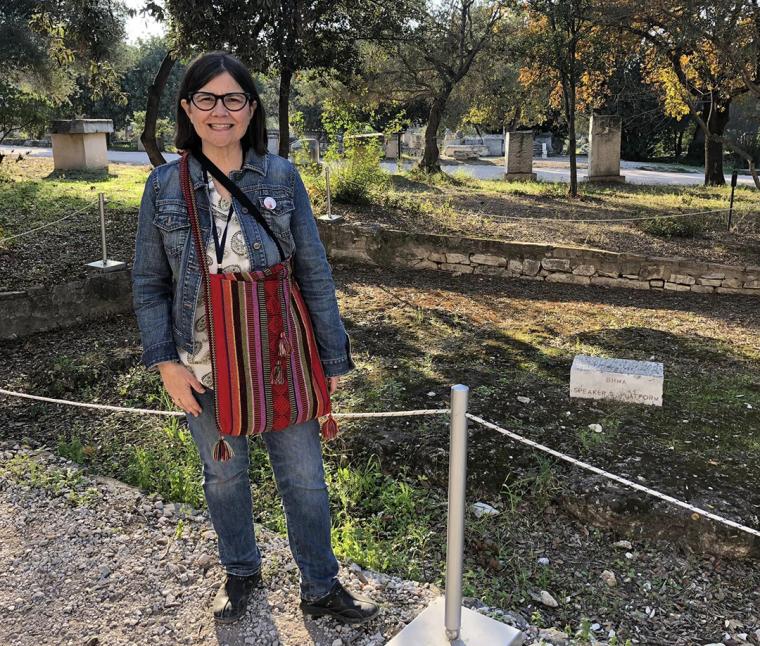 "It's really great to observe the students in awe — whether it's a landscape or what they're seeing in a museum," said Walters-Kramer, who also traveled to Greece with students in 2019.

Simmons said he is in awe of the "astonishing staying power" of many sites, including the Citadel of Mycenae and the Treasury of Atreus. At the latter site, while the group was waiting its turn, Simmons set the stage for what they were about to see. Even with his description, "We went around the corner of the retaining wall, and there was this gasp from the students," said Simmons of seeing the large "tholos" (beehive tomb) constructed between 1400 and 1200 BCE. "It was rewarding to see the students' reaction to how profound it all is."

The place that leaves Walters-Kramer in awe is a spot just down the hill from a major tourist site in Athens.

"A lot of people like the Parthenon, but my favorite place is just below it — the Agora, which is an ancient marketplace," she said. "A lot of dialogue took place there. Socrates would walk through there engaged in discussions. There's a small, raised area there that was a speaker's platform. So the Agora is the place that moved me the most, just knowing you're on the same ground as Socrates."

Walters-Kramer said that learning about ancient speakers was part of the attraction of the trip, for communication majors and non-majors alike.

"Ancient Greece, as well as Italy, was really 'ground zero' for rhetoric in the Western world," she said. "You had Aristotle and the sophists, the early thinkers. They talked with each other about rhetoric and what it is and how to use it ethically." 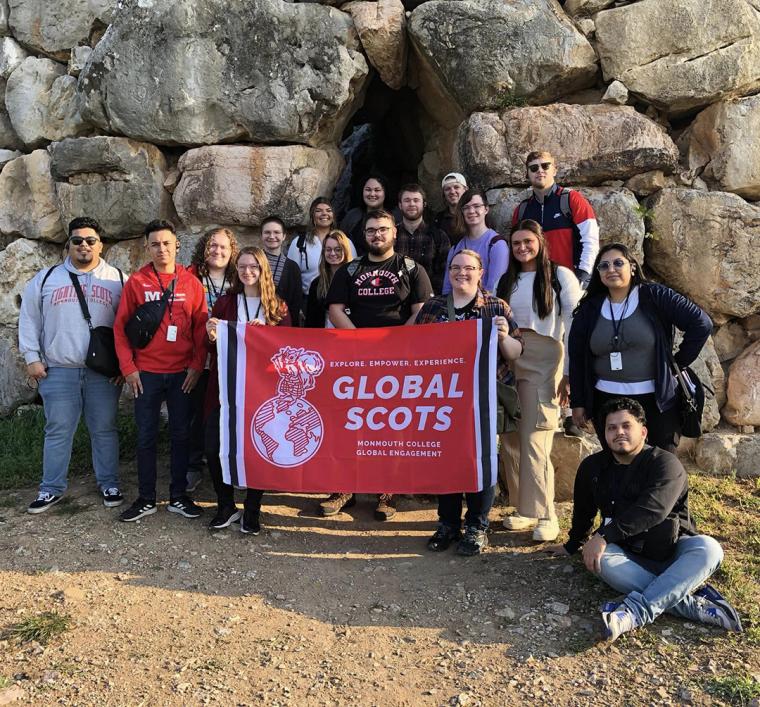 Some of the most famous speeches from ancient Greece are still recalled today, said Walters-Kramer. When former President Barack Obama eulogized Senator John McCain in 2018, his words drew comparisons to "Pericles' Funeral Oration," which dates back nearly 2,500 years to 431 BCE.

"That's just one example of how some of those speeches can still be turned to as exemplary," she said.

The other element of the trip that both Walters-Kramer and Simmons referenced was Greek hospitality, or "xenia," a custom believed to be fundamental for civilized life.

"There was all of this individualized, personalized attention that went into so many of our experiences," said Simmons. "We could feel the individual generosity in so many of our interactions. It very much felt like we were included in their family on plenty of occasions."

A prime example was a meal at an organic farm, which was run by the same family that owned the hotel where the Monmouth group stayed four nights.

"They showed us how they managed the olives and the oranges," said Simmons. "They shared their cultural traditions. The generosity of their time and the sharing of their expertise was really something."

Dorn offered advice for any of his fellow students who might be considering traveling outside the United States., either through a College trip or on their own.

"Students on the fence about studying abroad might feel nervous, but being nervous and unsure might be the best part," he said. "I remember when I was on the flight, I was worried and thinking 'This is real.' But when I landed and left the plane, I was speechless."