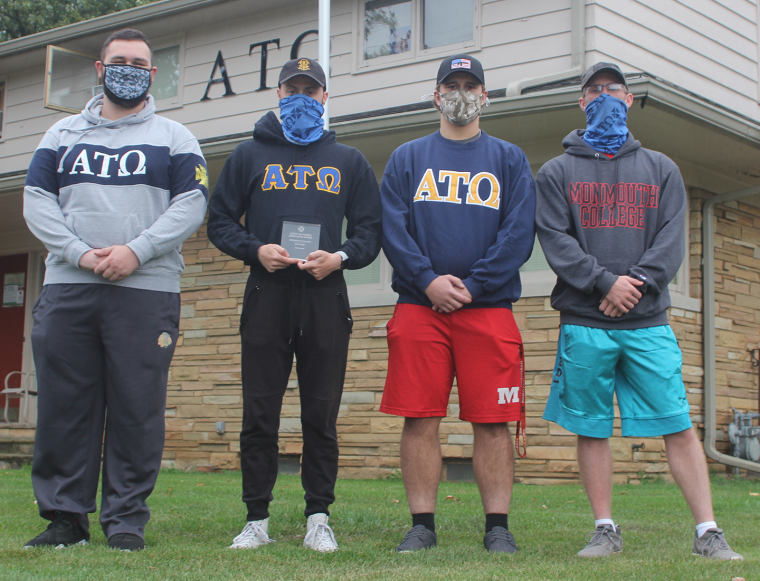 From left, Reid Fleeger ('21) of Byron, Illinois, Matt Franciscovich ('21) of Kewanee, Illinois, Brett Rissmann ('21) of Ballwin, Missouri, and Brendan Jones ('24) of Mascoutah, Illinois, stand in front of the ATO chapter house on the corner of Seventh Street and Broadway

MONMOUTH, ILLINOIS (October 2, 2020) — Achieving a national award has been an elusive quest for the men of Epsilon Nu, the Monmouth College chapter of the national fraternity Alpha Tau Omega.

But that changed recently when chapter president Matt Franciscovich ('21) of Kewanee, Illinois, was notified that Monmouth's ATO chapter had earned the Excellence Award for Scholarship for the 2019-20 academic year. Chapters who received the award from ATO national maintained a minimum chapter-average GPA of 3.0.

"They worked very hard and should feel good about their results," said Co-Dean of Students Karen Ogorzalek. "Earning this award and gaining the recognition from the national fraternity was very rewarding to the chapter."

For the chapter, the award represents a significant accomplishment.

"I told Dean O that we'd never gotten a national award since I've been here," said Franciscovich, who has served in all three of the top executive offices in the chapter during his time at Monmouth. "It's great to see something come along, especially for something that we've always struggled with. It's always been something we've discussed."

Those discussions came into sharper focus during the past year.

"Ever since I got here my freshman year, grades have seemed secondary or even tertiary," said Franciscovich. "As I've progressed through school, I've made it more of a focus, and our chapter has, too."

Ogorzalek agreed with Franciscovich that making academics a priority and providing a support system for each other were key steps to earning the award.

"Even though the men were not together last spring [because of COVID-19], they stayed connected virtually to support and encourage each other academically, among other reasons," she said. "With the transition of the new officers in January, the executive board set a goal of raising their chapter GPA and holding each other accountable for their academics."

In addition, the chapter's academic chair created study sessions and came up with incentives for the chapter to participate.