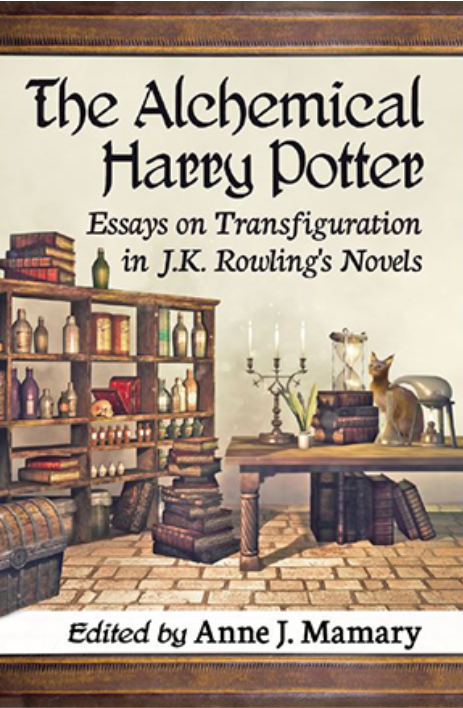 MONMOUTH, ILLINOIS (February 12, 2021) — Monmouth College philosophy professor Anne Mamary has been a huge fan of the Harry Potter series for two decades, so much so that she even teaches a course called “Harry Potter and the Philosopher's Soul.”

Mamary now has another text that she can use for the class, as a 323-page book she edited was recently published. The Alchemical Harry Potter: Essays on Transfiguration in J.K. Rowling's Novels is now available through McFarland Publishing.

In addition to editing the work, Mamary authored its final essay, "Ruddy Stargazers: Centaurs, Philosophers, and a Life Worth Living." A pair of 2018 Monmouth graduates, Isaac Willis and Sean Paulsgrove, have essays in the book, titled, respectively, "Re-Reading Harry Potter, Re-Creating Ourselves" and "Tapping on Just Another Brick in the Wall." West Central Middle School teacher and Monmouth alumna Tamy Rankin ('81) wrote the introduction to one of the book's three sections.

“I feel like I know everybody who wrote in the book, even though I've never met most of them,” said Mamary. “We put this call for papers out, and I spread the word through friends of friends, and that's been a wonderful thing, too, to make this connection with people.”

Mamary's attachment to the series, which debuted in 1997, took a while to develop.

“I finally read the first three books of the series when I was in my 30s,” said Mamary. “I wanted to see what all the fuss was about. By the time the fourth book came out, I was in line at Barnes and Noble at midnight to get it with all these students wearing Hogwarts costumes.”

Although many books have been written about the Harry Potter series, Mamary's book has an interesting angle.

“There's a ton of secondary literature on Harry Potter,” she said. “In some ways, it's arrogance to think we need one more book. We read some John Granger [who has an essay in the book] in class, and he is quite the scholar on Harry Potter. He brought to my attention that Rowling said that she never wanted to be a witch, but she wanted to be an alchemist. So she studied alchemy and that's the underlying internal logic for the series.”

Alchemy is an ancient branch of natural philosophy. Modern discussions of it are generally split into an examination of its exoteric practical applications and its esoteric spiritual aspects.

“If only I had Harry Potter when I was growing up,” she said. “What I really wanted to be, I think, was an alchemist.”

The Philosopher's Stone, known in the series for its power to transform base metals into gold and to give immortality to its maker, is the subject of the conflict between Harry and Voldemort in the first Harry Potter book.

“But alchemy is not about money or eternal life,” said Mamary. “It is much more about the transformations of desire, of power, and of people — through love. Harry's equally remarkable and ordinary power to love leads to his desire to find but not use the Philosopher's Stone at the start of the series and his wish to end the destructive power of the Elder Wand at the end.”

The collection of essays on alchemical symbolism and transformations in Rowling's series demonstrates how Harry's work with magical objects, people and creatures transfigure desire, power, and identity.

“Just as Harry's leaden existence on Privet Drive is transformed in the company of his friends and teachers, the Harry Potter novels have transformed millions of readers, inspiring us to find the gold in our ordinary lives,” said Mamary. “This is a series that is fictional, but it also tells some truths about a different cultural outlook on the world. Literally, some of the alchemical practices, but also figuratively. ... My students go into this fictional world, and they come out empowered.”