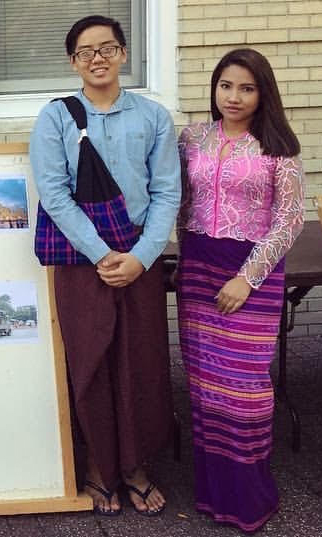 Monmouth College graduates Kuang Khant Nyein ('20) and Ei Ei Khine ('18) are pictured at one of the College's Cultural Festival events during their time as students.

MONMOUTH, ILLINOIS (February 26, 2021) — The Southeast Asian country of Myanmar has been embroiled in political and civil strife since the military rulers overthrew the nation's democratically-elected ruling-party on the morning of February 1.

Monmouth College graduate Ei Ei Khine ('18) received news about the coup on the night of January 31 in New York City, where she lives and works. She is among a group of Monmouth alumni who are closing following the developments in their native country."It definitely shocked me," she said.The military-led coup ousted Myanmar's ruling party, the National League for Democracy, which is led by Nobel Peace laureate Aung San Suu Kyi. All government powers were handed over to Senior General Min Aung Hlaing."The people's party recently [November 2020] had another landslide victory, but the military said it was voter-fraud," said Kuang Khant Nyein ('20), another Monmouth Burmese graduate, who is spending a gap year in Battle Creek, Michigan, but lived most of his youth in Myanmar's capital, Yangon. "The military controls twenty-five percent of the parliament. It would be like having members of the military make up 25 of the 100 senators in US government. The military blocks everything that the people's party tries to do."Khine was born and raised in Yangon before coming to the United States in 2014 to study at Monmouth. A year later, the civilian government returned to power in the country formerly known as Burma."For the five [most recent] years the civilian government was in power, you saw so much progress," she said. "The people were exposed to so many things through things like the internet and travel. Their eyes were opened; their ears were opened."Alerting the worldNow, opening eyes and ears around the world to the situation in Myanmar is the top priority for Khine, Nyein, and their friends and families."It's very important for us to push for our side," said Nyein, who studied political science at Monmouth. "I want everyone to know that the military is basically abusing human rights, violating basic human rights. People are living in fear. No one knows if the military is going to come into their house on a raid. They're arresting journalists, activists. People have to defend against the military instead of the other way around. The military is supposed to defend its people."That's how Khine sees the situation as well."The military is abusing power and weapons on the people they should be working for," she said. "They're torturing them, shooting them, beating them. At night, they go into people's homes and arrest them. There's no peace of mind for the people. . . I talk to my mom almost every day. They are afraid. But on the other side, in my mom's mind, she's happy I'm not there. If I was back home, I'd be protesting. . . Our goal right now is for the military government to transfer power to the civilian government and to release the political leaders who've been arrested."That goal is easier said than accomplished, said Nyein."My wish is for the military to become a separate institution, but I know that's very unlikely, because once people have power, it's hard for them to give it up," he said.Part of the protest has an official name — the Civil Disobedience Movement."People in the Civil Disobedience Movement stopped going to work, especially people in important jobs like banking and manufacturing," said Nyein. "What the military is doing right now is raiding houses, throwing bricks through windows, shooting at houses, sometimes with plastic bullets, and sometimes with real bullets. They're trying to scare people in the CDM."Raising awareness"Civil workers don't work for the new government," said Khine. "They literally stopped working in opposition of the whole government system and to raise awareness to the international community. . . People are desperate. They're asking for help from the United Nations, from the United States."Raising awareness, said Khine, is a chief goal for her, as well."I'm not back home, but what I can do is spread this information to my community here in New York City. I want more people to know that this inhumane treatment is happening in the world. I spent four years at Monmouth, and it was a home for me, too. It means so much to us for this opportunity to let people in the Monmouth College community know what's happening."Among those in the Monmouth community urging for US leaders to support Myanmar's democratic opposition is President Clarence R Wyatt."As someone who has spent a good part of his academic career studying and visiting Southeast Asia, I join with President Biden, the United Nations Security Council, and, especially, our young alumni and our student from Myanmar in condemning the recent military coup in Myanmar," Wyatt wrote in a letter to members of Illinois' Congressional delegation. "Fundamental freedoms — including freedom of speech and of the press, and individual rights and the rule of law — must be restored. Myanmar's transition to democratic institutions and processes, won over the last three decades by the struggles of its citizens, must be maintained."