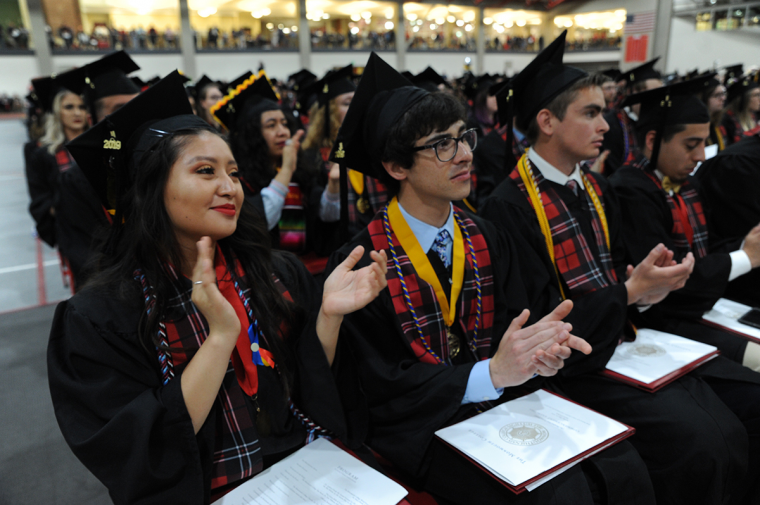 MONMOUTH, ILINOIS (April 16, 2020) — Members of the Monmouth College Class of 2019 are excelling in the workplace and in the next stage of their educational careers.

Those are the findings of the College's annual first destination survey of its most recent class of graduates. A total of 98 percent of the College's Class of 2019 members who responded reported being either employed or continuing their education, according to results of the first destination survey, which was conducted by the Monmouth Wackerle Center for Career, Leadership, and Fellowships.

That figure comes from a survey knowledge rate of 82 percent, which Monmouth Assistant Director of Career Development Jenny Sanberg said is far above the industry average. Monmouth's 2019 graduates reported being employed by such organizations as Caterpillar, Cresco Labs, and the US Department of Agriculture. Members of the class who continued their education were accepted at numerous graduate and professional schools, including Yale University, St Louis University, and The University of York in England. Developing skills For Ashley Maurer ('19), the opportunity to grow more than academically was a major takeaway from her Monmouth experience. "Since I was able to participate in campus groups, I developed interpersonal and professional skills that I have been able to carry over to my current position," said Maurer, who was recently promoted to a finance-analyst position at State Farm in Bloomington, Illinois. "The key part, though, is that very few of my résumé items tied directly to my majors or field of interest. It was the hard and soft skills that developed through those experiences, and my ability to transfer them to the outside world, that made me a stronger candidate." Learning to be pushed Kate Saulcy ('19), who's in the first of four years at the University of Illinois College of Medicine in Rockford, Illinois, said her Monmouth classroom experiences helped her tremendously. "The biggest thing that I'm thankful for is that I was challenged in a number of different ways," she said. "Medical school is not easy, but at least for me, the challenge isn't new. I majored in biochemistry, and the chemistry department did a really good job of not only presenting the material but really challenging us. So now I don't feel like I'm drowning. I know how to reach out for help and how to talk to my professors, and that's something that came from my experiences at Monmouth." Like Saulcy, Maurer said being challenged at Monmouth made her a stronger member of the workforce. "Whether it be a STEM course, communications, or 'Cosmology and Creation,' I was challenged in many different subjects and taught to think and learn," she said. "Integrated Studies courses were some of my more enjoyable classes just because I was able to step outside my majors and learn something new." Discovering a network Saulcy also appreciated the opportunity to network with successful alumni in her field. A cross-country runner at Monmouth, she was connected to Dr Joe Welty ('78) by her Fighting Scots coach, Jon Welty ('12). "I shadowed him over Christmas break," said Saulcy. "And then I had some very specific questions for him about monitoring liver function for statin therapy, and we had several texts back and forth. I thought I might have been putting him out, but he said, 'I'm always willing to teach.'" For Connor McDonald ('19), a financial adviser at Northwestern Mutual, the opportunity to network was a difference-maker. "My career plans were assisted by fellow alumni Connor Oltman ('19), who introduced me to the Northwestern Mutual internship after my freshman year," said McDonald, part of the 71 percent of his class that had at least one internship while in college. "During my time at Monmouth, I learned how to interact with others and have understanding from different life perspectives due to the classes and relationships I was able to build." For many students, the relationships they build with Wackerle Center staff go a long way to securing internships and, ultimately, professional positions or acceptance into strong graduate-school programs. "We focus on reaching out to students individually and scheduling one-on-one appointments," said Sanberg. "We try to meet with every new student by their first nine to 10 weeks on campus. The first meeting is just an introduction and isn't really about their career choice. It just gets them familiar with our office and how we can help them. Then that relationship we have with each student grows over the course of their four years." Sanberg said a talented team of student workers also helps to set the Wackerle Center's staff apart. Saulcy was appreciative of the help she received when it came time for medical-school interviews. "A lot of the application process to med school is niche-specific, but one area where the Wackerle Center really helped me was with mock-interviews," she said. "The Wackerle Center was perfect for that. I remember going to the weekly Science Seminar and then heading straight from there to the Wackerle Center to do interviews with [center director] Marnie Dugan. We talked about my strengths and what I wanted to highlight. It really got my mind thinking about the story I wanted to tell about myself in interviews." Maurer also appreciated the guidance she received. "The greatest benefits I got from the Wackerle Center were assistance with résumés and cover letters, interview advice for over the phone and in-person interviews, and being able to ask questions any time I needed help," she said. "Even after I graduated, I was asking questions about the application process and even how to manage job offers after the interview process."