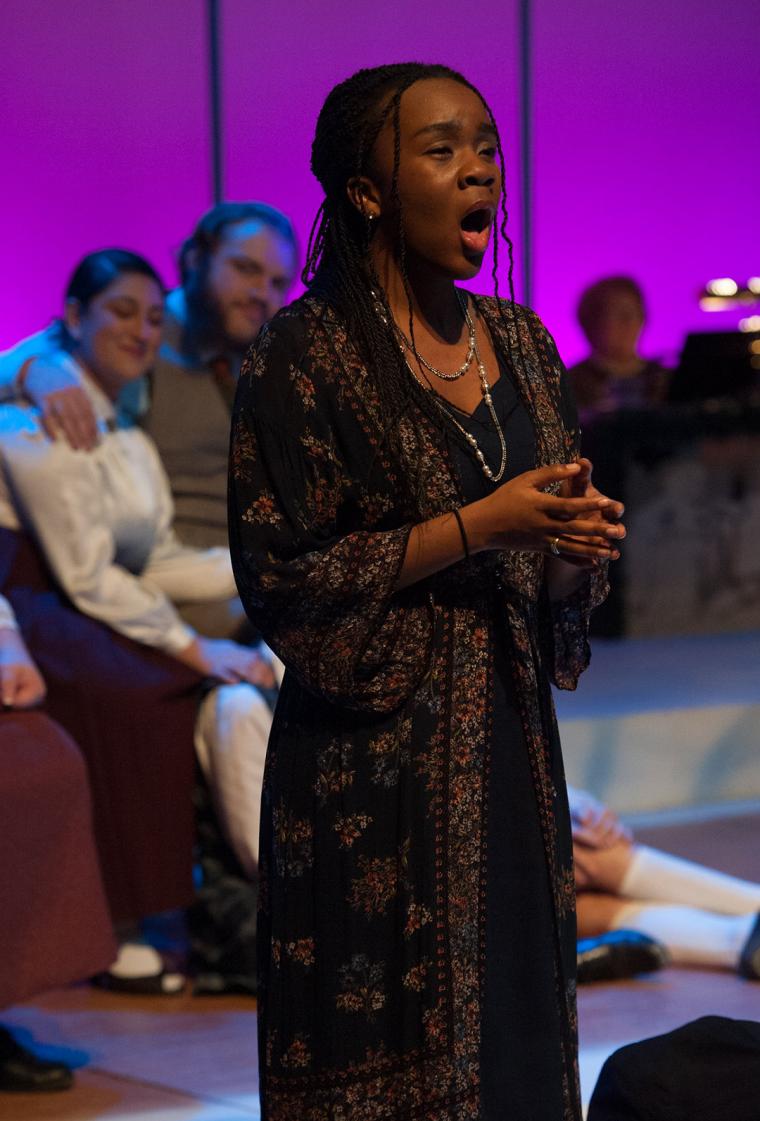 That was the theatre department's major takeaway from the Kennedy Center's Region 3 festival, where Madu made history, not once, but twice. Region 3 consists of colleges in Illinois, Indiana, Michigan, Wisconsin, and western Ohio. Its festival was one of eight events leading up to the national Kennedy Center American College Theater Festival in April.

Madu entered two competitive categories at the event, which was held online for the second year in a row because of the pandemic. She placed second in the musical theater competition and was a semifinalist in the Irene Ryan Acting Scholarship Auditions. The College has participated in the festival since 1995, and no Monmouth student had ever reached either of those heights.

"There were several hundred entrants, from programs big and small," said Monmouth theatre professor Todd Quick. "Some of the larger schools there were the schools in Chicago, and Ball State, which has a big competitive performance training program. For Gabi to hold her own against that competition from tiny Monmouth College is pretty incredible."

“You Must Love Me”

For her musical entry, Madu sang "You Must Love Me" from the film adaptation of the Andrew Lloyd Webber-Tim Rice musical Evita.

"I go to YouTube to find shorter pieces," said Madu, who submitted her entry via video from Las Vegas, where she was spending Christmas break with her mother. "I look through hundreds of songs, seeing what I can find that's in my range and feels comfortable."

She liked "You Must Love Me," but it wasn't until she heard a version by Solea Pfeiffer — "I'm obsessed with her," said Madu of the Zimbabwe-born actress and singer — that she moved it high on her list of possibilities.

"I felt it could use more emotion, more soul," she said. "When I heard her version, I thought that is exactly what the song needed."

Performances by the finalists were compiled into a "cabaret" video, available here. Carthage College's Tyler Meyer won the competition and will compete in April at the national festival. Thanks to her runner-up finish, Madu is the alternate, should Meyer not be able to participate.

She can act, too

The good news from the Kennedy Center American College Theater Festival began with Madu advancing in the Irene Ryan competition. She had watched the competition in person at the Region 3 festival in 2020 and was nominated to submit an online performance in 2021. This year, she and others were allowed to self-nominate. For her initial performance, she dug into her vault of monologues, settling on one from the contemporary play Cry It Out by Molly Smith-Metzler.

"Professor Quick always tells us, 'When you find a monologue you like, put it in a Google Drive," said Madu. "When I let him know that I advanced, I looked him in the eye and told him 'You were right.'"

In the second round, she teamed up with Monmouth student Celeste Lythgow ('24), who was in Lafayette, Colorado. Through Zoom, the pair presented a scene from an Aaron Posner play.

"While doing that, I got the email about reaching the finals in musical theater," said Madu. "I physically didn't know how to react to that. I was home alone at the time, and it was chaos."

In the Irene Ryan semifinals, where Madu was one of sixteen remaining competitors, she went back to a monologue, which was from the Nilo Cruz play Anna and the Tropics.

Madu's most recent vocal performance on the Monmouth College stage came during last spring's musical Little Women, when she played the major role of Meg March. She also sang what Quick called "a beautiful solo" in the 2019 holiday play A Child's Christmas in Wales.

Since Little Women, Madu has been behind the scenes, learning all facets of theatre production as she prepares to attend graduate school and pursue a master of fine arts degree.

"One of the most impressive things about Gabi is that she's as talented behind the scenes as she is on stage," said Quick. "She was the stage manager for A Christmas Carol, and she's been my assistant director for a couple of shows."

After she graduates from Monmouth next year, Madu plans to pursue a career in theatre.

"Plan A is to attend the Yale School of Drama," she said. "That's the dream and the goal. Ideally, I want to become a professional in acting or vocal performance."

And if, for some unlikely reason, her musical or theatre goals aren't realized, there's always another possibility.

"If it all goes wrong, Plan F would be to use my computer science degree from Monmouth," said Madu, who is majoring in that subject in addition to theatre.