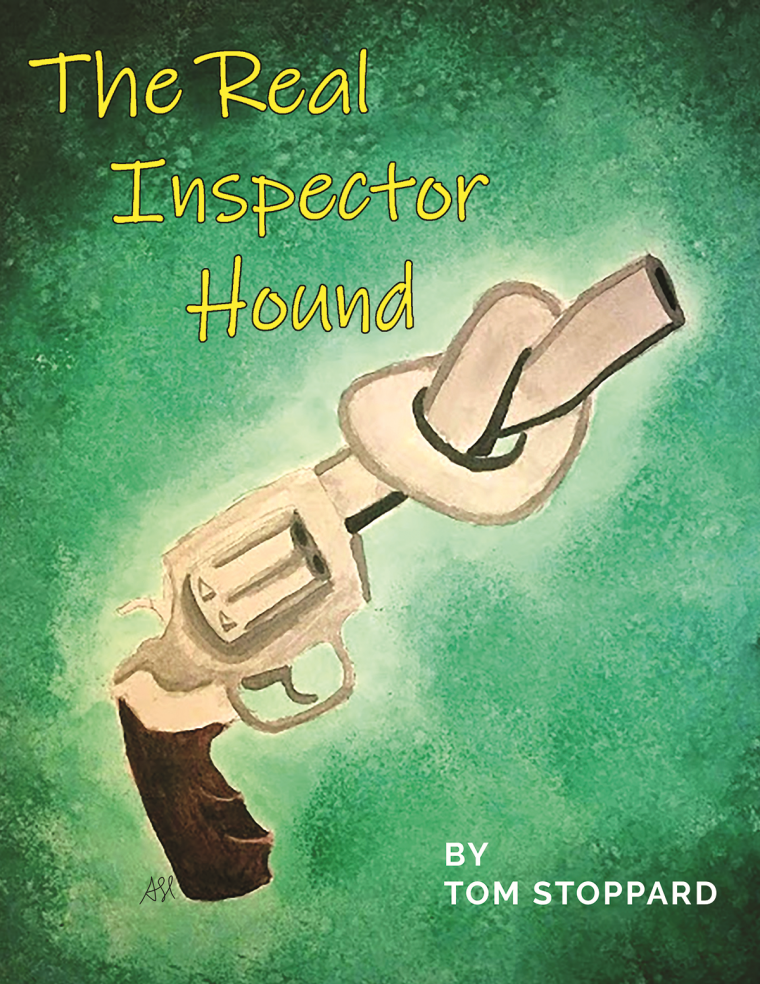 MONMOUTH, ILL. (02/20/2020) — The world of the stage can be simplified to two types of productions — tragedies and comedies. Monmouth College's February 27-March 1 production of British playwright Tom Stoppard's The Real Inspector Hound falls squarely into the latter category.

"For a play written several decades ago (the 1960s), the humor has remained incredibly effective," said Monmouth theatre professor Todd Quick, who is directing the production, which will be staged at the College's downtown Fusion Theatre, 230 Main St. "The cast was in hysterics at our first read-through." Attending the premiere of a new murder-mystery, two feuding theatre critics soon find themselves inside the play-within-a-play and are implicated in the lethal activities of an escaped madman. "What makes this genre of theatre so popular is that it asks something from the audience," said Quick. "It's not a type of entertainment where you're going to just sit back passively and let it happen. It demands that you get involved. It excites you with these little teasers and riddles, so you're whispering to the people next to you while you're watching, 'Ooh, ooh, I think it was him.' That kind of active audience involvement with our imagination keeps it really exciting." Quick said the one-act play's central characters, Moon and Birdboot, represent "the extremes of ridiculousness among theatre critics of the time," as Stoppard pokes fun at his former career. Birdboot, portrayed by Kenny Broge ('22) of Lena, Illinois, "is our blue-collar critic, who is more interested in spending some quality time with the attractive leading ladies than in doing any sort of serious theatrical reviewing." Moon, played by Gabriela Madu ('23) of Montego Bay, Jamaica, "is the second-string critic with a huge chip on her shoulder, but who is incredibly intelligent and delights in showing off that intelligence with high-falutin' vocabulary and impressive turns of phrase. ... In Moon and Birdboot, I think we see both ends of the absurdity of the profession, and we just delight in knowing that Stoppard had done this himself." Quick said all of the students involved in the production are doing great work, but he singled out Madu, whom he said audience members will remember for her role as Aunt Elieri in last fall's production of A Child's Christmas in Wales. "As a first-year student who hasn't even taken any of our acting classes yet, she's really doing astounding work," said Quick. "She has page-long absurd monologues where she's daydreaming about ... well, you'll have to come to the play to find out. But she was the first one off-book and is just doing really inspiring work." Monmouth College will present "The Real Inspector Hound" at 7:30PM, February 27-29, and at 2PM, March 1, at the Fusion Theatre, 230 S Main St., Monmouth. Tickets can be purchased at department.monm.edu/theatre. Tickets are $8 for adults, $7 for seniors and students, and $6 for students and faculty with a Monmouth College ID.