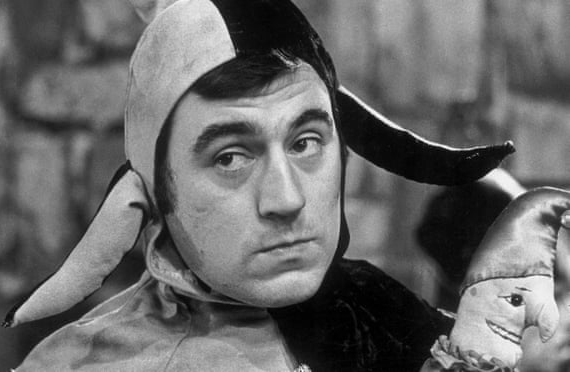 MONMOUTH, ILLINOIS (January 27, 2020) — It only takes three paragraphs for The Guardian's obituary of Terry Jones to mention the British comedian's passion for medieval history. One of the six creators of the popular British television show Monty Python's Flying Circus, Jones died January 21. He was 77.

It was that keen historical interest that sparked a relationship with Monmouth College emeritus history professor Bill Urban — a relationship that spanned 30 years and led to Jones writing the foreword for Urban's 2006 book, Medieval Mercenaries. "Terry was a dear friend of many years standing," said Urban.

Urban said the relationship started in 1985, shortly after Jones authored Chaucer's Knight: The Portrait of a Medieval Mercenary.

"We exchanged e-mails every few months, usually when he was interested in something regarding the Middle Ages and wanted information that Google couldn't provide," Urban said. Their initial encounter came when Urban wrote a review of Chaucer's Knight, countering Jones's argument that Chaucer would've been thought of as "a mercenary of the worst type" by his peers in 14th-century England. "He contacted me about the review," said Urban. "That was one of the wonderful things about him. You could disagree with him, but he wouldn't get crazy about it." There were no hard feelings, as evidenced by Jones's glowing review of Urban's book two decades later: "Bill Urban's Medieval Mercenaries puts the events of the fourteenth century into a vivid historical context. He provides an astonishingly clear overview of the whole subject of mercenaries and he does so with tremendous authority and wit. It makes a thrilling read." The friendship included not only Jones's foreword, but what Urban called "a marvelous evening" in the comedian's London home. "When I knew I was going to be in London, I sent him a note, and he replied that he wished he could meet with me, but he had other plans," said Urban. "But then he contacted me shortly after and said, 'I've had a person cancel, and I'd love to have you at a dinner party I'm hosting.'" Urban stayed until well past midnight, at one point joining Jones and other guests on the roof to look at London through a 360-degree telescope of which Jones was particularly proud. "He was just bubbly, excited, on all the time," said Urban. "He was always excited, always interested." Because the evening lasted so long, public transportation was shut down for the night. Urban said Jones not only got him a cab but took that favor even further. "I got in, and the driver said, 'It's all taken care of,'" said Urban. The Monmouth professor remained in contact with Jones until about five years ago, when his girlfriend reached out to Urban and said Jones had dementia. "That was the last time I heard from him," said Urban, who called Jones "an essential part" of the Monty Python team. "He was never the star, but his portrayals of little old ladies and other supporting roles were unforgettable. He also wrote a lot of the skits." The obituary in The Guardian agreed: "Arguably, without Jones, Monty Python's Flying Circus would not have revolutionised British TV comedy. He was key in developing the show's distinctively trippy, stream-of-consciousness format, where each surreal set-up flowed into the next, unpunctuated by punchlines."

Urban was interviewed last week about his relationship with Jones by Galesburg radio station WGIL: https://www.wgil.com/2020/01/24/monmouth-college-connection-to-monty-python-actor-terry-jones/.