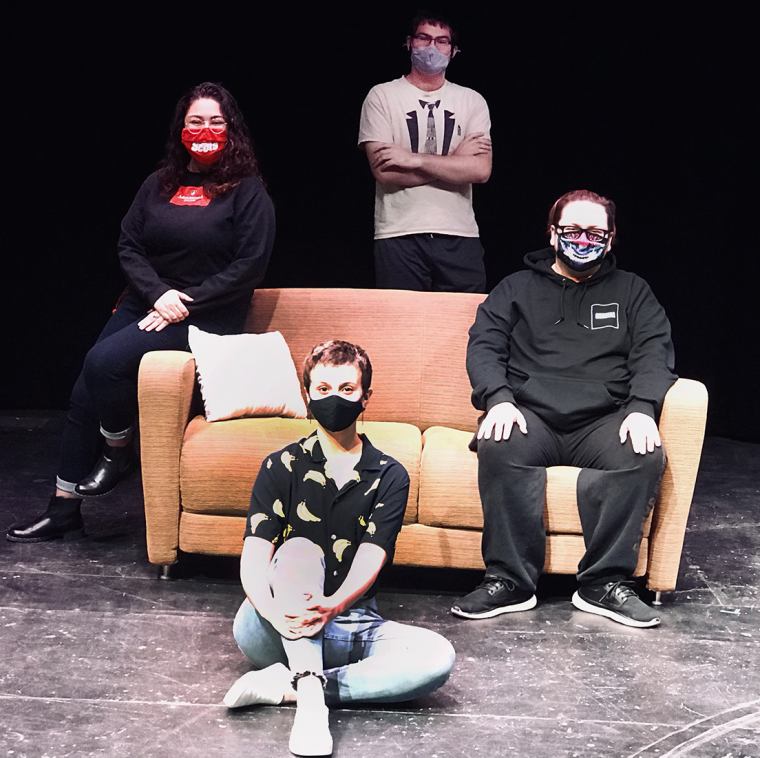 MONMOUTH, ILLINOIS (November 10, 2020) — Since the invention of cell-phones as brick-sized monstrosities in the 1970s, they have risen in prominence and their use has become ubiquitous.

Simultaneously, and perhaps consequently, other practices and beliefs have begun to recede. What is sacred now? How do we connect? How can we know ourselves and others? How do we make meaning in life and death?These are questions that the next theatre production at Monmouth College — Dead Man's Cell Phone by Sarah Ruhl — asks.Ruhl's 2007 play will be performed November 20-22 in the College's Wells Theater. The play — which will be presented twice in person to limited audiences and once online — will be directed by four students for their final project in the "Principles of Directing" class: Allie Bryan ('22) of Abingdon, Illinois; Amelia Chavez ('21) of Chicago; Richard Eyre ('21) of Mount Prospect, Illinois; and Noah Harshbarger ('21) of Cameron, Illinois.

The November 20 and November 22 on-stage performances will be given before an audience of no more than 25 people. Actors will perform in special masks and remain socially-distanced from the audience.

During the semester-long production process, students draw upon existing knowledge of theatre praxis in the areas of acting, design and tech, script analysis, and dramaturgy, as well as upon their growing knowledge of directing. Through the experience, theatre majors are able to expand their appreciation for, and skillset in, the craft of theatre.The play's dominant themes include the dualities of isolation/intimacy, mystery/knowledge, and life/death. Technology is one vehicle Ruhl uses to develop these themes throughout the play."I want the audience to have that moment of 'Oh wow, I should call this person' or 'Man, I really need to touch base with that person,'" said Chavez. "Call your loved ones. Make sure your love/admiration/aggression/sadness is known. We go on through life way too often without proper communication. Fix the discrepancies that come from that. Make it known that you care for one another."Bryan also has goals for the audience experience."I want the audience to reflect on both the lighthearted and serious moments of the play," she said. "While there is a dark undertone present in this narrative, I found it to be entertaining, and I was able to make connections between the actions of the characters and my own personal habits and experiences.Harshbarger also acknowledged the funny/sad duality of the play."This play is both extremely funny and extremely sad in the most relatable way," he said. "There are so many big questions in this play. I want the audience to ask themselves these big questions while watching the play and especially after having watched it."Eyre, who is fresh off starring in the College's October production of An Enemy of the People, said "After watching this play, I want the thought 'What impression have I made on my family, my friends?' to cross each member of the audience's minds. We are on this Earth for a relatively short amount of time. Knowing who we are is one thing, one very important thing. But what do we mean to others?"Monmouth College will present "Dead Man's Cell Phone" at 7:30 p.m. Nov. 20 and at 2 p.m. Nov. 22 at Wells Theater on campus. A total of 25 tickets will be sold for each performance and can be purchased at monmouthcollege.edu/theatre. An unlimited number of tickets will be available for the Nov. 21 online-only performance, which will be at 7:30 p.m. A talk-back will follow the Nov. 21 performance via Zoom. Tickets and online passes are $10 for adults, $8 for seniors and Monmouth faculty and staff, and $6 for Monmouth students.