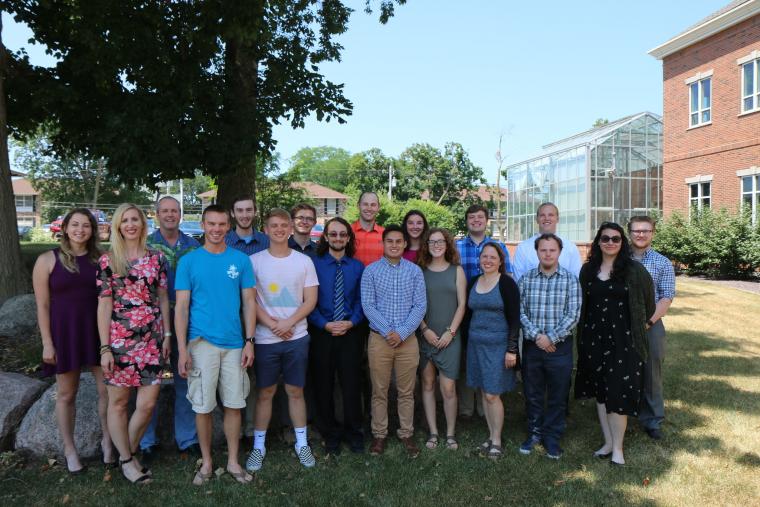 MONMOUTH, ILLINOIS (07/23/2019) — None of the dozen Monmouth College students who presented talks at the close of the Doc Kieft Summer Research Program wore a cap and gown, but that wouldn't have been out of the question.

"You've officially graduated into mentorship," said Brad Sturgeon, one of four Monmouth chemistry professors who oversaw research during the eight-week program. "You'll be involved in the educational process that makes our department so strong." While addressing the audience who gathered for the talks in the Pattee Auditorium of the College's Center for Science and Business, Sturgeon noted, "Most of the students in the program this year are rising juniors, so we're excited that they have two more years of research with us here at Monmouth." And two more years to pass on their knowledge and advice to the chemistry and biochemistry majors behind them. Sturgeon's colleague Mike Prinsell said participating in the Doc Kieft Summer Research Program benefits Monmouth's chemistry students several ways. "This opportunity gives them experience doing research, which can set them up for accomplishing more work during the semester, since they don't need to learn the basics in between classes," said Prinsell. "Participating in our summer program also gives our students a leg up when applying for an external Research Experiences for Undergraduates (REU) at another college in future summers." Sturgeon used a term from another strong Monmouth science program to echo one of those benefits. "In physics, they talk about momentum," he told the students. "This program provides you momentum. When you come back in the fall, you know what to do." A 30-year chemistry professor beloved by Monmouth students, the late Richard "Doc" Kieft left his $2.3 million estate to the College's chemistry department. He also created the summer research program, which gives science students an opportunity to conduct cutting-edge research under faculty supervision. Since its inception in 2010, the program has grown steadily in scope and complexity of research. "Doc left an endowment and told us to do great things," said Sturgeon. Some of those great things were not possible on campus in 2010, but advances in science and equipment over the past decade have allowed for projects such as the one conducted by Sam Argubright ('20) of Elgin, Illinois, who experimented with three-dimensional printing of electron paramagnetic resonance cells. "Designing my own flow cells can have a greatly reduced cost for lab equipment and (allow for) better product generation," Argubright wrote in his project abstract. Many of the projects were related to everyday medical issues people face, such as acetaminophen-induced liver injury. That was the topic addressed by Will Fox ('21) of Hamilton, Illinois, and Josie Welker ('21) of Lewistown, Illinois, whose project was titled "Enzymatic Oxidation of Biophenols." Part of their project involved the use of high-pressure liquid chromatography, making it one of several projects that utilized chromatography. Another was the topic researched by Trevor Jones ('21) of Mukwonago, Wisconsin, who studied propolis, one of the many products extracted by honeybees. Propolis has many health benefits, but Jones said that American propolis has not been studied nearly as much as Brazilian samples.

Not all the research was concerned with possible health benefits. Victoria Burgo ('21) of Chicago did gene work with E coli, which she hopes will ultimately lead to sustainable production of biofuels. Burgo did that work in the lab of Monmouth professor Laura Moore, and the fourth member of the department who oversaw research was Audra Goach. The other students who participated in the Doc Kieft Summer Research Program included: Alex Cutright ('21) of Glenwood Springs, Colorado; Logan Evans ('21) of Glasford, Illinois; Andrew Ferris ('20) of Galesburg, Illinois; Tyler Halsey ('21) of Aledo, Illinois; Kyle McLaughlin ('21) of Chicago; Emily Rein ('21) of Morton, Illinois; and Joe Shie ('21) of Davenport, Iowa. "All the students did a really great job this summer," said Prinsell. "They made significant progress on their research projects and all the talks were enjoyable and educational." "We're always very proud of our students' presentation skills," said Sturgeon. "This is going to go a long way toward helping them with further presentations at Monmouth and beyond."