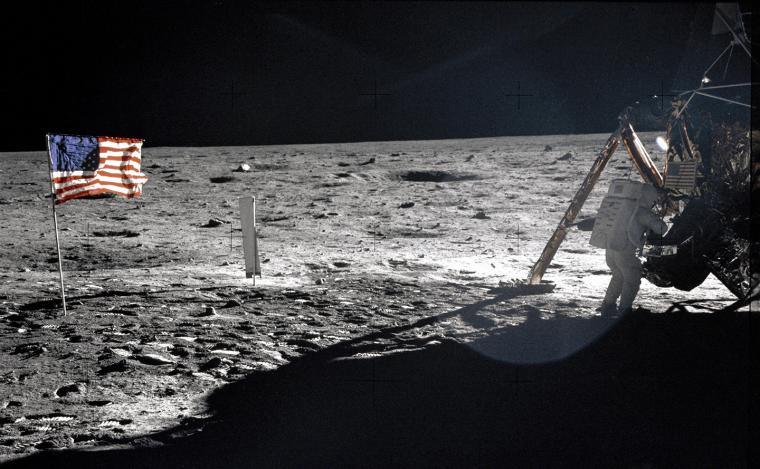 Earth's only permanent natural satellite is being celebrated this week, as people around the world observe the 50th anniversary of July 20, 1969, when Neil Armstrong became the first person to set foot on the moon, followed 19 minutes later by fellow Apollo 11 crew-member Buzz Aldrin. Solontoi said that the most obvious way to look at the moon is with a sense of wonder that humans were able to figure out a way to travel 238,900 miles to it, touch down on its surface, and return back to Earth. "Only 12 people have ever set foot on the moon, and only 24 people have ever been under the influence of its gravity," said Solontoi. "The four-year window of those Apollo missions is the only time in all of human history that those things have ever happened. It's just mind-blowing, still, to think about." Looking for meaning But another way Solontoi looks at the moon is the commitment that the US government made to landing a person there and the ripple effect it had on the scientific community. "It was an incredible expenditure to go to the moon," he said. "Back then, NASA (the National Aeronautics and Space Administration) received 4.5 percent of the national budget. They get about 0.4 percent today." Federal budget-priorities have changed since the height of the "space race" of the 1960s, when the stakes were higher than simply which nation reached the moon first. "Going to the moon became a thing in the fallout of the Soviet space launch," said Solontoi of the first artificial Earth satellite, launched in 1957 by the Soviet Union. "If the Soviet Union could do that, the fear was that they could put a half-ton nuclear warhead anywhere they wanted to. It was not just a race to the moon, but a race against nuclear armageddon." Another ripple of the space race is the job Solontoi holds today. "Quite a bit of the study of the physical sciences and of astronomy, specifically, at institutions today is due to the space race," he said. "I'm referring to what we now call STEM (Science, Technology, Engineering, and Mathematics). I have a job and a career because of what happened with the space program. More so than the event itself, science was really changed as NASA geared up to land on the moon. There was a hyperfocus on technology and engineering that spawned many of the things we see today." Looking to observe Solontoi said a literal way to look at the moon is through the College's 20-inch Trubeck Telescope on top of the Center for Science and Business. It is one of the most powerful telescopes on any college campus. "We have at least one community outreach with the Trubeck Telescope, and that's 'Observe the Moon Night,' which we always take part in," he said of the worldwide celebration, which will be held this year on October 5. "We're also starting to put together plans to have more open house events." While using the Trubeck Telescope or one of the College's smaller 8-inch telescopes is one way to look at the moon, visiting an observatory is not the only way to appreciate the moon's beauty. "Even with a simple pair of binoculars, you can see some really detailed contours of the moon," said Solontoi. Looking to the future As Solontoi looks to the next 50 years of space exploration, that "incredible expenditure" price tag still applies. "When I put on my cranky hat, I say, 'Yes, the next person to walk on the moon is alive today. Yes, the first person to walk on Mars is alive today. But they're most likely living in Beijing,'" he said. Solontoi said that's because China has the combination of the high-level technology needed, as well as a "let's prove what we can do" mindset. That's in contrast to US leaders talking the talk about space but not backing it up with resources. "I think just about every president in my lifetime has had grandiose plans for NASA, but they haven't written the giant check necessary to fulfill them," he said. "That's just like me saying that my next car is going to be a Lamborghini, but then not making any changes in my budget." Solontoi believes that more trips to the moon are justified, both for scientific and human reasons. "The entire mission profile of Apollo 11 was to land on the moon, plant our flag, and collect rocks," said Solontoi. "There are still many, many unanswered questions relating to science on the moon." One question that has been answered is the age of moon rocks. "The moon is ridiculously old," he said. "There are only a few places on Earth where you can find rocks that are three billion years old. The average age of the rocks Apollo 11 brought back was 3.5 billion years." As for the human reason to make a lunar return, Solontoi posed the rhetorical question, "What does going back to the moon mean for you, me, and my goldfish?" "It certainly doesn't buy any goldfish flakes. But what mankind does is try to figure things out, and that's what separates us from goldfish," he said.