Pentatonix World Tour Kicks Off in May, includes Swing through Taxslayer Center in Moline, IL, on June 22 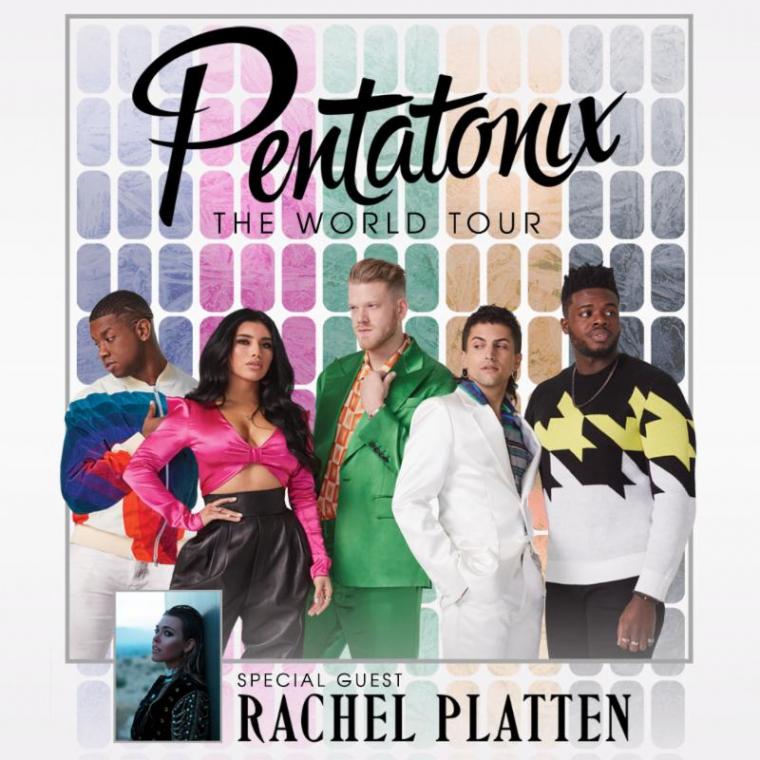 Rachel Platten will be opening act at tour stops

LOS ANGELES, CALIFORNIA (February 7, 2019) — Three-time Grammy Award-winning and multi-platinum-selling artist Pentatonix have announced a 45-date tour produced by Live Nation to kick off their World Tour. Emmy Award-winning, multi-platinum-selling recording artist Rachel Platten will join as special guest on all dates. The North American dates will begin at Oracle Arena in Oakland, CA on May 11 and include stops at The Forum in Los Angeles and Madison Square Garden in New York City. Additional cities, countries and continents will be announced soon.

Tickets will be available to the general public starting Friday, February 15 at 12PM local time at www.ptxofficial.com, unless otherwise noted below.

Bethel Woods Center for the Arts

*Public on-sale for the Atlantic City, NJ show will be available starting on Friday, February 22 at 10AM local time.

**Ticket purchase information for the Springfield, IL show is forthcoming.

***Patreon presale for the Highland Park, IL show begins Monday, April 29 at 10AM local time and runs until Tuesday, April 30 at 5PM local time. Public on-sale for this show will be available starting on Wednesday, May 8 at 6AM local time.

+Not a Live Nation date

Three-time Grammy® Award-winning and multi-platinum-selling artist Pentatonix has sold nearly 10 million albums in worldwide consumption and performed for hundreds of thousands of fans at their sold out shows across the globe. Their YouTube channel boasts more than 15.5 million subscribers, yielding over 3.4 billion video views. Their 2015 self-titled album is certified gold after debuting #1 on Billboard's 200.

Additionally, nine of their albums reached the top 10 on Billboard's 200 chart (two albums reaching #1) and received multiple RIAA certifications for multi-platinum, platinum and gold selling albums and singles. Their tracks, "Mary, Did You Know?" and "Hallelujah," were certified platinum, while the Pentatonix original, "Can't Sleep Love," was certified gold.  The group has had two holiday specials on NBC, released their tour documentary — On My Way Home — in 2015 and appeared in the feature film, Pitch Perfect 2. In October 2017, Pentatonix released a deluxe version of their certified platinum 2016 holiday album, A PENTATONIX CHRISTMAS DELUXE, and completed their sold-out A Pentatonix Christmas Tour in December. The following year, in April 2018, Pentatonix released the first collection in the group's PTX Presents series, PTX PRESENTS: TOP POP VOL 1, which features 11 PTX-curated modern pop performances, and just wrapped their 39-city North American tour in September.

Most recently, Pentatonix released their fourth holiday album, CHRISTMAS IS HERE! accompanied by a new single, "Making Christmas." They have also announced their Christmas is Here! Tour that starts this November and finishes with four nights at The Beacon Theatre in New York City.

Born in New York City and raised in Massachusetts, Rachel Platten is an Emmy Award winner, multi platinum selling recording artist. Few artists in the past decade have struck a chord of hope and resilience like she did with her empowering hit "Fight Song." Listeners instantly adopted the transformative anthem as their own, linking fans' tales of personal empowerment across the globe.  Rachel topped countless radio and iTunes charts worldwide, with her major label debut album "Wildfire" which also included the platinum Billboard Hot 100 hit, "Stand By You."  In 2017, Rachel released Waves which again delivered a searing, emotionally and socially relevant pop gem that has connected audiences and moved women to stand up for each other while also amplifying the power of individuality "Broken Glass" as well as sultry, infectious "Shivers" and more intimate songs such as the bewitching "Collide." Most recently, while awaiting the arrival of Rachel's precious baby girl, she released "You Belong" as a dedication and anthem for expectant moms everywhere.