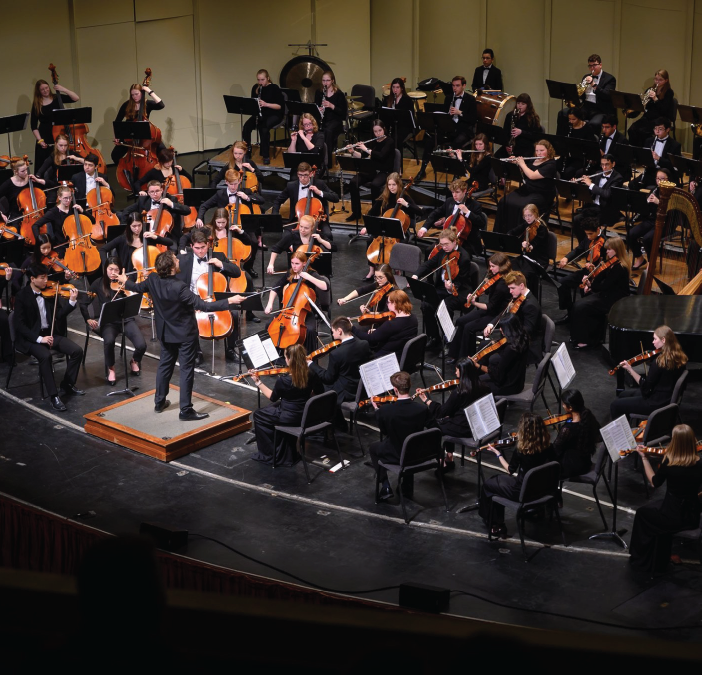 DAVENPORT, IOWA (April 20, 2020) — The Quad City Symphony Youth Ensembles (QCSYE) is pleased to announce the 2019-20 scholarship awards which help fulfill the QCSYE’s commitment to providing musical opportunities for students. Each year, funds are awarded to QCSYE members who make extraordinary musical and extra-musical contributions to the success of the youth ensemble program. An Online Award Ceremony for the 2019-20 QCSYE Seniors and the Scholarship Award Recipients will be held on the QCSO Facebook Page on Wednesday, April 22, 5PM.

The Ada Marie Snyder Memorial Scholarship is a scholarship that aims to enhance a student’s musical development by providing funds for opportunities, such a summer camps, new instruments, etc. This year’s winner is Youth Symphony Orchestra (YSO) bassoonist, Savannah Connor.

The Robert A and Patricia Hanson Scholarships are awarded to members that are highly involved in all aspects of musical life including school ensembles, community ensembles, QCSYE volunteerism, QCSO concert attendance, and great attendance at QCSYE rehearsals. Four seniors were awarded this scholarship, and they are YSO members Shelby Fick, Michael Hill, Owen Weimer, and McKenzie Lofgren.

The James Dixon Memorial Scholarship is awarded to a brass player in the QCSYE program that is highly involved in all aspects of musical life including school ensembles, community ensembles, QCSYE volunteerism, QCSO concert attendance, and great attendance at QCSYE rehearsals. This year’s recipient of the Dixon Scholarship is YSO Horn player, Cassandra Smith.

The Etude Club Scholarship awards are given to string players and recipients are asked to give a short performance at an Etude Club meeting. The four winners are YSO cellists Lily Moen, Sophia Heller, Victoria Davis, and Madison Brady.

The Volunteers for Symphony Century Scholarship is awarded to students who demonstrate a strong commitment to volunteerism within the QCSYE. This year’s recipients are YSO cellists, Sophia Heller, and Aviana Holst.

The Judith Katz Memorial Scholarship is a scholarship intended to “set a standard,” to encourage higher achievement among youth-ensemble members, and to further the goals and mission of the Youth Symphony Orchestra. It is awarded on the basis of a special juried audition each year to a senior member of the Youth Symphony Orchestra. This year’s Katz Scholarship winner is percussionist Michael Hill.

QCSYE Seniors Plan for the Future

We’d like to thank our 2020 graduates for their impact on the organization! Together, they inspired young musicians in their community through Symphony Day, developed new friendships, and challenged their conductors to reach new levels of musicianship. Here are a few of the QCSYE graduates and their plans for the future. As they begin their life after high school, we wish them the best of luck and hope they continue their passion for music.

Madison Anthony is a violinist in the Youth Symphony Orchestra (YSO). She plans to take a gap year before attending the University of Iowa to major in Music Education with a minor in Composition. She has been a member of the QCSYE for 3 years.

Vivian Browne is a clarinetist in YSO. She will be attending Wartburg College to major in Music Education where she will participate in the Wind Ensemble and choir. She has been a member of the QCSYE for 4 years.

Isabel Buchanan is a flute player in YSO. She has been a member of the QCSYE for 3 years, and she plans to attend Loras College to major in Social Work with a minor in Spanish on the Pre-Law track.

Ella Crockett is a violinist in YSO, and she plans to attend Blackhawk College in the fall.

Sophie Curtis is a violinist in YSO, and she will be attending Black Hills State University to double major in Marketing and Graphic Design as well as competing in track and field.

Logan De Lacy is a clarinetist in YSO. He plans to major in Biomedical Engineering at the University of Wisconsin–Madison. He was a member of YPO for 3 years and YSO for 2 years.

Aditya Desai will be attending the University of Iowa to major in Physics and Economics on a Pre-Law track. He has been a member of the QCSYE for 6 years and is a flute player in YSO.

Guinevere Diehl plays French Horn in YSO. She plans to attend the University of Wisconsin–Platteville to major in Mathematics with a focus in Secondary Education and Music. This is her second year in the QCSYE.

Jutta Dieterich has participated in the QCSYE programs for 8 years (5 years in the Youth Choir and 3 years in the full orchestras as a clarinetist). She plans to attend the Creighton University to major in Accounting or Finance.

Shelby Fick is a violist and plans to attend Illinois State University next year to study Music Education and work for the school’s String Project program. She has participated in the QCSYE for five years.

Jaylon Foster is a clarinetist in YPO and plans to attend St. Ambrose University to study Biology with a Pre-Med track.

Chirag Gowda is a violinist in YSO. He plans to attend either Baylor University or the University of Miami to study Neuroscience.

Abigail Hamborg will be attending Luther College to double major in Accounting and Psychology with a minor in Spanish. She plays the violin in YSO.

Michael Hill has been involved with the QCSYE for eight years playing bass and percussion. Michael plans to major in Music Education at the University of Iowa.

Nathanael Houk is a violist in YSO and is planning to attend Columbia College in Chicago to major in Audio Arts. He has been in the QCSYE program since fifth grade for a total of eight years.

Phoebe Joy is an oboist and has participated in the QCSYE for 4 years. Next year she will attend St Olaf College to double major in English and Music.

Dan Kim will be attending Emory University in Atlanta, Georgia, where he plans to major in either Biology or Biochemistry. He has participated in the QCSYE for 4 years and is a violinist in YSO.

Cameron LaPage is a trumpet player in YSO and plans to attend the University of Iowa to double-major in Political Science and History before going into Law. This is his first year in QCYSO.

Joe Lobb is a clarinetist in YSO and plans to attend the University of Iowa to double-major in Saxophone and Clarinet Performance with a minor in Psychology. This is his second year in the QCSYE.

McKenzie Lofgren has been a member of the Youth Symphony Orchestra as a violinist for the last four years. She has plans to study Voice and Violin in college and is currently undecided on where she will study.

Jennifer Mahl plays cello in YSO and will be attending college to major in Secondary Music Education. She has participated in the QCSYE programs for 6 years.

Kiran Marla has played the violin in the QCSYE for seven years. He plans to attend UCLA as a Physics major on the Pre-Med track.

Aliza Oxyer is a violist in YSO and will be attending the University of Iowa to double-major in History and Political Science with a minor in Economics. This is her third year in the QCSYE program.

Amulya Pillutla is a clarinetist in YSO and plans to study engineering in college. She has been a part of the youth ensembles for 9 years.

Will Sammons is still unsure about where he will be attending college next year, but wherever he attends, he will continue to pursue music and play the French Horn. This is Will’s first year in the QCSYE.

Laura Sitz is a cellist in the YSO and will be attending The University of Iowa, majoring in Finance and Accounting with a minor in Economics.

Calder Skaar has played clarinet in the QCSYE for one year. He will be attending Cornell College, where he will major in Chemistry and minor in Music.

Ashton Snarr is a first-year violinist in YSO, and she plans to attend Utah State University to major in Psychology.

Turner Sperry is a cellist in YSO and has been a member of the QCSYE for 5 years. He will attend the University of Northern Iowa to major in Music Education and Cello Performance.

Owen Weimer is a trombonist who has participated in the QCSYE program for 6 years — 3 years in YPO and 3 years in YSO. He will attend the University of Northern Iowa to major in Music Education.

Faith Weis is a cellist in YSO and will be attending Michigan State University to major in Kinesiology. She has been a member of the QCSYE for 5 years.

Grace Welveart is YSO bassist and plans to attend college on a Pre-Med track. She will continue to play Bass in college.

The Quad City Symphony Youth Ensembles (QCSYE) program consists of five performance groups (four youth orchestras and a youth choir) for students in grades two through twelve. Under the direction of the outstanding QCSYE conducting staff, members have the opportunity to perform great orchestral and choral repertoire with the most talented young musicians in the area and learn from the mentorship of professional musicians from throughout the region. Ensemble members come from the greater Quad Cities, as well as other communities in southeast Iowa and northwest Illinois.