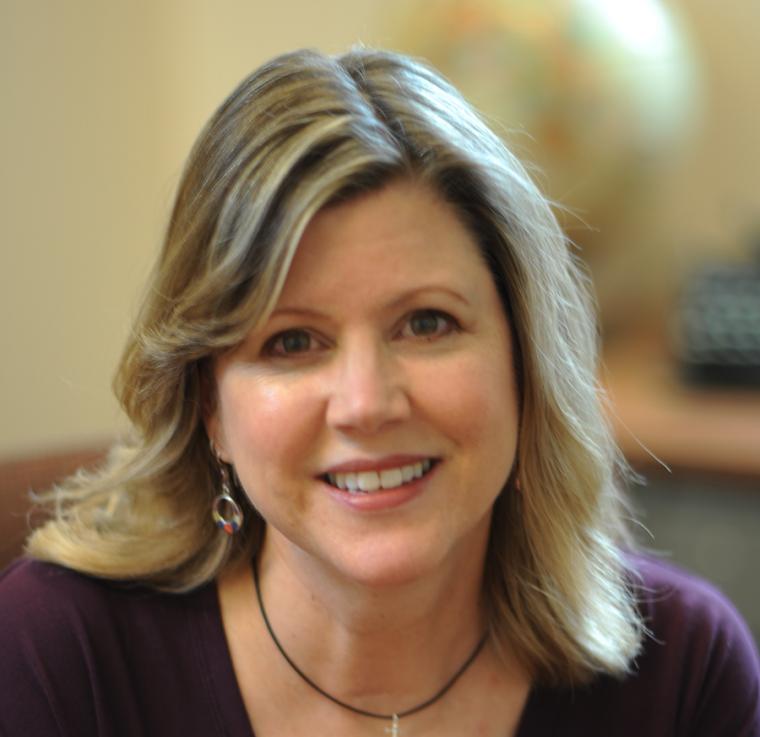 Starting June 10, Larson will begin training to be a staff-member with Mercy Ships, an organization that serves "the world's forgotten poor" in West Africa. Her first assignment will be in Dakar, Senegal.

"Once in a blue moon, the elements of life come together in such a way that you cannot resist the current," said Larson, who began teaching at Monmouth in 2000.

A year ago, Larson took a one-week leave of absence to volunteer with Mercy Ships, helping train mental-health providers in the African nation of Benin, which she called "an amazing experience." She reached out after seeing a 60 Minutes segment about the organization.

While attempting to set up her post-Monmouth life in her native Arizona, Larson said she was nudged by God to revisit the Mercy Ships website.

"When I was there a year ago, they didn't have a position for a mental-health professional on the ship," she said. "But when I checked back a few weeks ago, they had created a new position. And they said it was urgent, that they needed to fill the position by June. I thought, 'I think I can do this.'"

The position is officially called "Chaplain/Counselor."

"This is going to be different than what I was doing before," said Larson. "Before, I was inland, working with mental-health professionals on the ground. Now, I'll actually be on the ship, and I'll be working with the 400 or so people on staff."

The idea is that even those providing care need to receive care themselves.

"The work is very intense," said Larson of the life-changing medical-care that Mercy Ships provides. "People describe the culture on the ship as tight-knit. They are like-minded in mission, and people feel connected. But there are also eight people to a room, and around 40 different cultures are represented. So you have to learn how to communicate and how to deal with things like conflict and homesickness and culture-shock. I'll be helping to provide a wellness focus so that the ship's staff can carry out their mission."

Larson holds a doctorate in counseling psychology from Northern Arizona University, with clinical experience including community counseling agencies and a counseling lab for undergraduate students that she created early in her tenure at Monmouth.

Larson said Mercy Ships has made an impact on West African nations in several ways.

"Before the ship arrives in an area, they have an 'ahead team,'" she said. "Seven thousand people lined up to be served at the last location. People walked for days to be there, sometimes walking from other countries."

One of the many services provided by Mercy Ships is the treatment of cleft-palates. Typically, the staff works on 150 such cases per stop.

"At the last stop, they only had seven cases on the books," said Larson. "The doctors asked, 'What's going on with that? Why is the number so low?' They were told, 'The people you've trained how to do that have been doing all the surgeries.'"

The ship's mission "is treating conditions that are preventable in other areas of the world, or conditions that weren't treated in time and have become larger issues," said Larson. "In these regions, when health issues are visible and other people are aware of them, the community often thinks the victim is cursed. There is stigma and shame attached to the condition. The work Mercy Ships does really does change the trajectory of these people's lives and helps make them contributing members of their society."

Larson is such a believer in the cause that she's making a minimum two-year commitment. Starting in August, she will spend 10 months on a ship docked in Dakar, with another 10-month stint to follow in 2020. She hopes others will believe in the cause and is raising support through her website: drkristinlarson.com. "Every person on the ship is a volunteer," she said. "You pay your own way to get to West Africa and you pay for your room and board on the ship."

Larson said that starting the College's counseling lab is one of the highlights of her Monmouth career. But most of all, she enjoyed working in a psychology department that was clearly on the rise over the course of the past two decades.

"The department has really developed, and it's a remarkably close-knit group," she said. "We're very mission-focused. Just working with my amazing colleagues has been a big highlight for me."

One of those colleagues, Marsha Dopheide, effectively summarized Larson's Monmouth career and her plans for the future while speaking at her retirement reception.

Larson is also grateful for all the travel opportunities she's had while on the faculty. By her count, she's been to at least 16 countries on College-related trips. That's not counting her time in West Africa, where her list of countries visited will continue to grow.