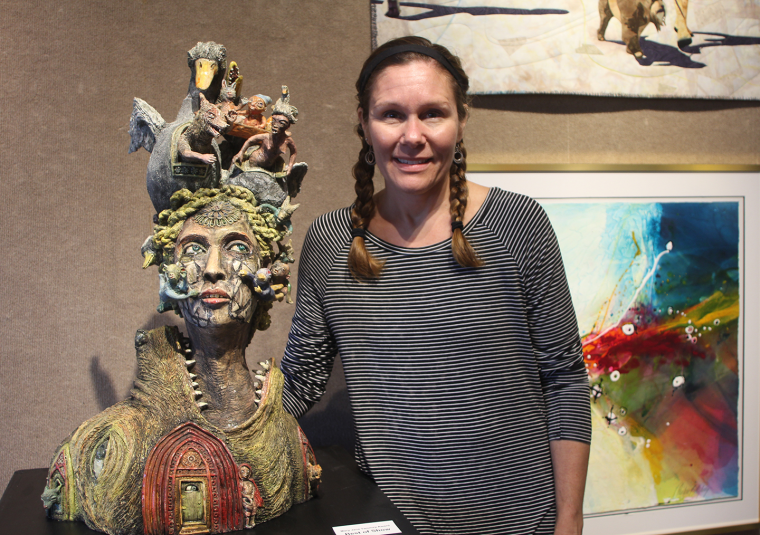 Monmouth College art professor Janis Wunderlich poses with her ceramics piece "Vulnerabilities," which received the Best of Show honor at the "64 Arts" national juried exhibition at the Buchanan Center for the Arts in Monmouth

Wunderlich claimed the prize at "64 Arts," a national juried art exhibit at the Buchanan Center for the Arts in Monmouth. The exhibit, which features all media of artwork by artists from across the country — including a collage by Wunderlich's department colleague Stephanie Baugh — will be on display through mid-December. "When I went to add this to my résumé, I noticed that I've always won second place — I've never won Best of Show," said Wunderlich, who joined Monmouth's faculty in 2017. Her winning work, "Vulnerabilities," was created during a time of transition. She started the piece in Ohio but finished it in her first months after moving to Monmouth. Shortly after she arrived, the piece hit a major snag. "I started building it before I left to come here, but I did the glazing and firing here," she said. "This piece gave me a lot of trouble. I've never made a face that large before, and it blew apart during the firing process. I had to put the pieces back together." "The beauty and the struggle" At the time Wunderlich was creating the work, she not only made a geographic transition, but was also moving forward from a divorce. "The piece shares the perspective that the world exposes women to many potential dangers," she said, referring, in part, to vulnerabilities surrounding relationships and stability. The piece, which stands nearly three feet tall, has a woman's head and neck emerging from the mouth of a sharp-toothed beast. "I made this piece as a way to rise above ... rising above the difficult culture ... rising above the things that are dangerous and difficult in a woman's life," said Wunderlich. "Maybe she's conquered this beast, or maybe she's escaping its mouth." Wunderlich said the firing mishap added a compelling layer to the piece.

"After piecing it back together in a mosaic, I realized that its failure told a more correct version of me and my story," she said. "There's joy and sadness in this piece. It's wonderful and difficult at the same time ... the beauty and the struggle. In the end, the failure made it better? Meanwhile, in Ohio While "Vulnerabilities" can be viewed locally, Wunderlich is also excited about having several works of art at two exhibits in Ohio. At the Ross Art Museum on the campus of Ohio Wesleyan University, she'll be featured with several artists in an exhibit titled "Figuring Our Humanity," including two artists whom she teaches in her classes at Monmouth — Alberto Giacometti and Kathe Kollwitz. "It's a big honor," she said. "Having my art next to theirs is really fun." In December, she'll have 10 pieces on display at an exhibit titled "Crowns: The Journey of Motherhood" at the Canton Museum of Art. When Wunderlich is not creating bold and beautiful ceramics, she enjoys distance running. She recently conquered another 26.2-mile run, completing the Air Force Marathon in Dayton, Ohio, on a hot day in late September. Wunderlich used the "tortoise" approach in her race plan, and it paid off against "hares" as she claimed first place in her age group and was the 14th-fastest female runner overall. "I wanted to run a time of 3:30, but it was just so hot," she said of her three-hour, 47-minute finish. "So I scaled down and went slower. A lot of people who went out fast had to walk or didn't finish at all. I passed a lot of faster people."