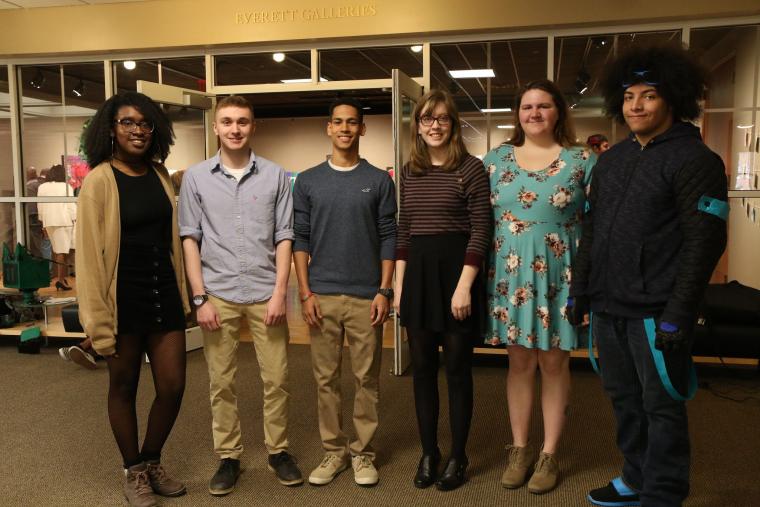 MONMOUTH, ILLINOIS (April 17, 2019) — Although they share the common bond of being senior art majors at Monmouth College, the six artists currently featured in the Everett Gallery of Hewes Library are a diverse group.

"We're all from different backgrounds and we all have our own individual identities, and we brought that into our work," said Nia Robertson of Chicago.

Also featured at the exhibit — which will be on display through May 3 — are Jay Gray of Scott Air Force Base, Illinois, Lauren Mink of Champaign, Illinois, Ethan Olson of Little York, Illinois, Remy Schwass of Aledo, Illinois, and Emily Shaw of Viola, Illinois.

"I focused mainly on the beauty of the hair of black women," said Robertson. "All of my work has dealt with the concept of beauty in some way, and I just honed in on that particular aspect of it. ... Dealing with the subject just let me embrace my hair more and accept the beauty of it."

"Birds are a common subject in my work," she said. "The reason why I do so many birds is that I associate the birds with my family, the time of year, and the favorite places we have traveled. During the last several semesters, I have experimented with pastel, watercolor, and a combination of collage from watercolor and magazine-clippings. I wanted to experiment with different media to create different feeling of birds."

Shaw said she was also influenced by her surroundings — the speed and movement related to her summer job.

"My work is inspired by race cars," she said. "That comes from me working at the Quad City Speedway over the summer for the past five or six years. ... I like to work bigger. I like to move with my paintings, and that helps me capture the movements that I really want to get."

Olson said his work is inspired by "elements of architecture and geometry."

"I try to draw viewers in with the composition as a whole as well as keep them engaged by creating enough detail to hold their attention," he said. "There is usually a feeling of careful precision present in my pieces which comes from the meticulousness of the way I work, which usually includes plenty of sketching and measuring."

Gray and Schwass both hope to further their careers in art through cartooning and game design, respectively.

"All of my work in this show has to do in some form with the body," said Gray, who is also a member of the Fighting Scots track team. "I started out thinking about character design, because I want to be a cartoonist. To have a better understanding of that, the professors pushed me to look at anatomy more. I'm also an athlete, so I was already interested in how the body works."

Said Schwass: "For this particular show, I focused on my game-design work. I have a lot of ideas for my future in game-design and animation, and a lot of it is promoting the idea of what I call 'trouble-prone' — it's my characters, it's the world-building, it's the whole story. Mainly, I want people to be entertained."