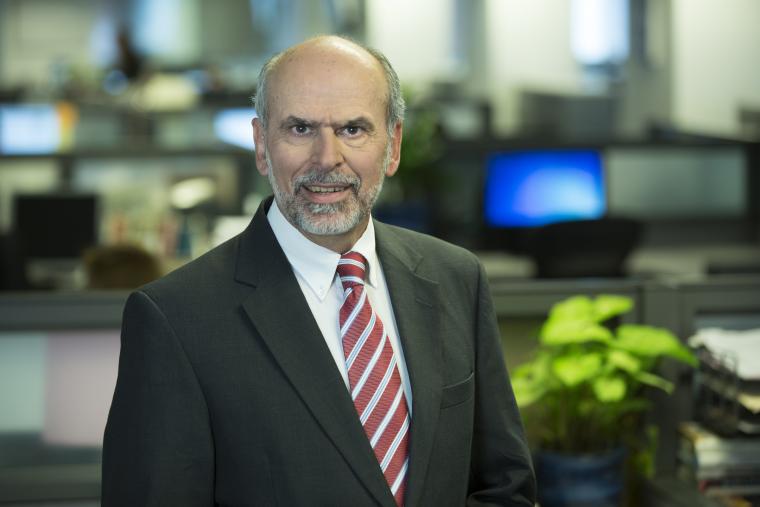 MONMOUTH, ILLINOIS (November 21, 2019) — With a presidential election year right around the corner, a national political journalist will help make sense of the landscape at a public talk on December 3 at Monmouth College.

Gerald Seib, the executive Washington editor and chief commentator for the Wall Street Journal, will speak about "Election 2020: Politics in a Time of Disruption" at 7PM in the Pattee Auditorium of the Center for Science and Business. His talk is free and open to the public. "Jerry Seib is a rarity in today's hyper-partisan journalistic atmosphere — an old-fashioned reporter who presents facts and objective analysis in his opinion pieces rather than ideological talking points," said Monmouth political science lecturer Robin Johnson, who invited Seib to campus as part of his Midwest Matters series on politics. "That's why his comments on the 2020 election will be especially relevant and timely as we approach the Iowa caucuses."

Seib writes the Journal's weekly "Capital Journal" column, which brings an insightful, predictive, and original understanding to politics, national affairs, and foreign policy. In addition, he writes other periodic analyses of national and international affairs for the newspaper and WSJ.com. Seib also oversees the Journal's daily Washington newsletter, "Capital Journal Daybreak," and produces video analyses of events in the nation's capital. He appears regularly on networks such as CBS, NBC, Fox News, CNN, and the BBC as a commentator on Washington affairs. He has moderated three presidential debates. Prior to taking his current position, Seib also served for 12 years as the Journal's Washington bureau chief, and as the Journal's deputy Washington bureau chief before that. He began his column in 1993. Seib has received numerous professional honors, including the Gerald R Ford Foundation prize for distinguished reporting.